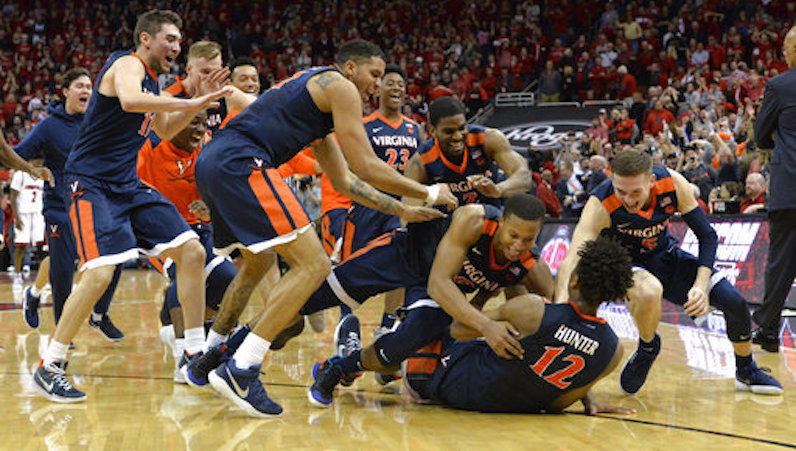 College basketball season is here! Get ready for six months of NCAA bubble talk, rivalry games and banter, water cooler conversations, backdoor cuts and discussions of NBA Draft stock. The ACC is set to have another big season on the hardwood and, with the season here, it’s time to line up all the league’s teams and rank them, 1-15.

With that in mind, here’s the debut of our ACC Basketball Power Rankings for the 2018-19 season.

This team has everything to make a Final Four run: an excellent coach, an experienced backcourt (79 combined starts for Kyle Guy and Ty Jerome), a top-flight defense (projected No. 1 in defensive efficiency by KenPom), three-point shooting and a two-way stud with lottery potential (De’Andre Hunter). According to Synergy Sports, Hunter scored 1.27 points per possession at the rim last season; he’s ready for a larger share this season.

You can rank these first three teams in any order and have it make sense. Duke lacks the returning production of UVA and UNC, but no team in the nation has the raw talent of the Blue Devils. Slightly bold take: with Tre Jones, R.J. Barrett, Cameron Reddish and Zion Williamson, Duke has the chance to be an elite passing team.

Syracuse has a Hall of Fame coach, two NBA prospects (Tyus Battle and Oshae Brissett) and a top-10 defense (No. 3 in KenPom’s preseason projections). That gives this team a high floor. However, can they score the ball efficiently this season? If that happens, this team can play with anyone.

This bomb squad is the unofficial spirit animal of the ACC Analytics page. The Hokies, led by star point guard Justin Robinson (1.18 points per possession when Robinson passed out of pick-and-roll last season, per Synergy), spread the floor with shooters and let it fly from deep. On offense, Virginia Tech will light up scoreboards on a nightly basis. The loss of Chris Clarke is significant, though.

Shelton Mitchell and Marcquise Reed form a terrific backcourt; their perimeter excellence is balanced by the rugged interior play of Elijah Thomas, who can post-up on one end (50.5 FG% on post-ups) and protect the rim (10 percent block rate) on the other. Rangy forward Aamir Simms is an emerging talent on the defensive end.

Phil Cofer’s injury is a bummer; this team needs its star stretch 4 healthy to hit its ceiling in the 2018-19 season. Still, Florida State’s loaded on the perimeter; PJ Savoy and MJ Walker provide shooting, while Terance Mann continues his run as one of the top slashers in the nation. Oh, and the point guard position now belongs to Trent Forrest — who’s ready for a breakout season.

The Wolfpack will look to turn games into track meets this season. Blessed with a roster stacked with wing athletes — like CJ Bryce, Devon Daniels and Torin Dorn — that seems like wise idea. On defense, NC State will press, defend the three-point line (only 32.2 percent of opponent FGA last season were 3PA, 25th in the nation) and look to force turnovers. In the half-court offense, look for Markell Johnson to get downhill and play slash-and-kick basketball.

Chris Mack arrives and instantly establishes a new culture for Louisville. Over his final five seasons at Xavier, Mack and the Musketeers won 21+ games each season and posted top-50 offenses. That’s a good thing. The roster is interesting — no obvious stars but plenty of talent. After a summer playing for the Nigerian national team, is Jordan Nwora ready for an elevated role?

Notre Dame must replace Bonzie Colson (*pours some out) and Matt Farrell — one of the top pick-and-roll combinations in recent ACC history. Mike Brey is a wizard and he knows how to build efficient offenses that target the money areas of the floor — rim finishes and spot-up three-pointers — and avoid turnovers. Temple Gibbs is a beast — 1.18 points per spot-up possession, No. 1 in the ACC — but can he carry the load as the lead guard now?

Similar to Notre Dame, Miami must replace a lot of production: Bruce Brown, Lonnie Walker and Ja’Quan Newton. Chris Lykes is dynamic and he should pair well with Dewan Hernandez, who added a three-ball to his offensive repertoire, in Miami’s screen-heavy offense. Those two should have room to dance in the middle with Zach Johnson and Anthony Lawrence spacing the floor.

Ky Bowman returns, which is a big deal for Boston College. One of the top pick-and-roll scorers in the ACC a season ago (163 points, 42 eFG%, per Synergy), Bowman will get to attack off ball screens whenever he wants. Without Jerome Robinson — the ACC’s top attacking guard last season — how will Bowman handle defenses loading up on him?

Wake Forest is turning over two-thirds of its roster from last season, and has never been able to defend under Danny Manning. The Demon Deacons have added an excellent rookie class — including Jaylen Hoard, a legit top-25 NBA Draft prospect — and return two sophomores with serious upside: Chaundee Brown and Olivier Sarr, who has stretch 5 potential. Is Brandon Childress ready to run the show in Winston-Salem, too?

The Yellow Jackets of Josh Pastner should be solid defensively; Georgia Tech ranks 39th in KenPom’s preseason defensive efficiency ratings. However, scoring the ball will be an absolute slog for this team this season. Tech had all kinds of issues on offense the last two seasons; with Josh Okogie getting minutes for the Minnesota Timberwolves now, that’s unlikely to get any easier.

After two ugly seasons under Kevin Stallings, Pitt basketball seems to have turned a corner under Jeff Capel. The Panthers return a new of players from last season’s roster, including forward Shamiel Stevenson, who can get buckets. Recruiting has improved, too, under Capel, but the ACC isn’t exactly a friendly place for a program trying to rebuild.