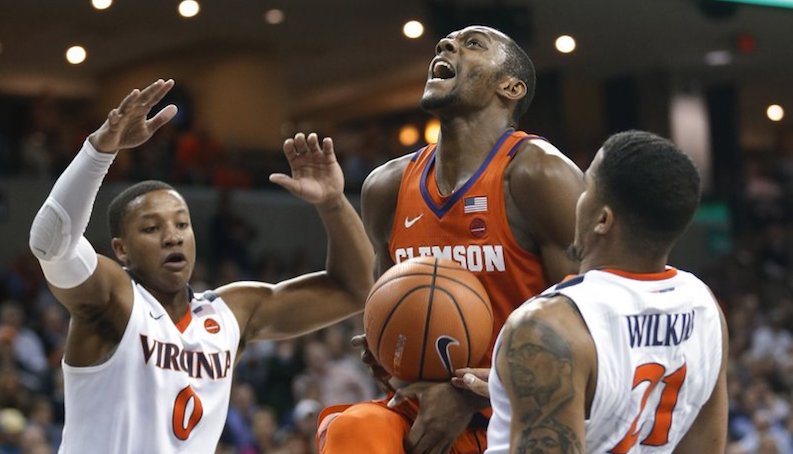 Aamir Simms will have an even larger role for Clemson basketball in 2018-19. (AP Photo)

Prior to his injury — an ACL tear against Notre Dame — Donte Grantham was in the midst of an excellent senior season. Most importantly: Grantham is ahead of schedule in terms of his recovery. However, if one positive could be extracted from this — strictly from Clemson’s perspective: early minutes for Aamir Simms.

After the season, David Skara decided to turn pro; this means Simms is one of the few players to return with experience up front. In 2018-19, Simms will be a wildly important player for Clemson.

Under Brad Brownell, Clemson has frequently deployed lineups that include an athletic small-ball 4. Think back to teams of the past — K.J. McDaniels, Jaron Blossomgame and Donte Grantham; all three of those guys occupied a space that Aamir Simms will, going forward.

This flex forward spot is important for the Tigers on both ends of the floor, and Simms is a nice fit in this position. He can defend multiple positions, help control the glass (17.3 percent defensive rebound rate) and space the floor — over 38 percent of his field goal attempts came from beyond the arc.

The defensive versatility of Simms has to be especially exciting for Brownell, too. Simms isn’t a tower in the paint, but he posted a block rate north of six percent — 3.3 blocks per 100 possessions. As a freshman, Simms was one of 14 ACC players to play at least 500 minutes and post a block rate of six percent. Of those 14, Simms joins Isaiah Wilkins — the ACC’s Defensive Player of the Year — Bonzie Colson as the only players under 6-foot-8 on the list.

According to Sports Reference, Simms posted a defensive box plus/minus of 5.4, which would’ve been a top-10 number in the ACC if he qualified in terms of minutes. Simms also ranked in the 71st percentile in man-to-man half-court defensive efficiency, per Synergy Sports.

On offense, Clemson will obviously rely up its dynamic backcourt of Marcquise Reed and Shelton Mitchell. Those two will carry to bulk of the offense — along with post power Elijah Thomas (50.5 FG% on post-ups, according to Synergy). However, with three-point sniper Gabe DeVoe gone, Clemson will need to find scoring from other spots.

This is where Simms can step up, too. Over the final dozen games of the 2017-18 season, his usage rate jumped; with an even more increased role, Simms has serious potential for the Tigers. Simms shot 47.4 percent on three-pointers during this stretch of play. For Thomas to have his space down on the block, Simms can help provide room to breathe.

Simms can also have an impact on the break. According to Synergy, Simms shot 76.5 percent and scored 1.5 points per possession in transition — No. 3 in the ACC (minimum 20 possessions).