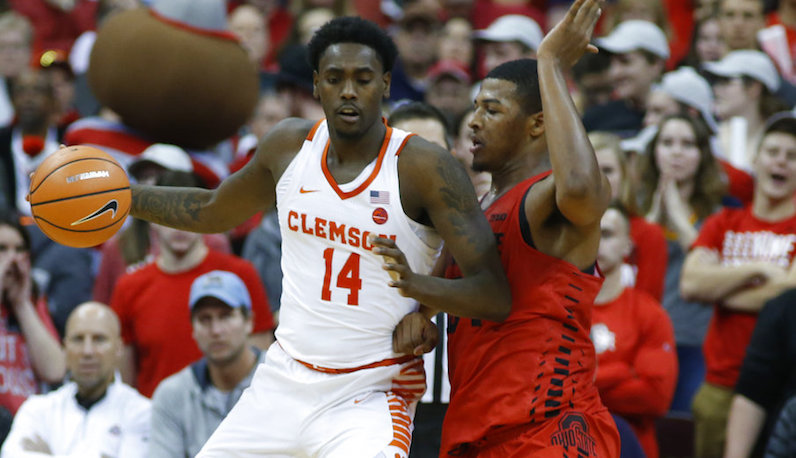 We tried to tell you: Elijah Thomas of Clemson is the meanest post-up bully in the ACC. Now in is second season with the Tigers, Thomas is better than ever before, and has his team out to a 7-1 start (top 50 in both offensive and defensive efficiency). The post-up isn’t dead at Clemson.

Me and My Old School

Basketball, especially at the NBA level, is all about spreading the floor with shooters, running pick-and-rolls and playing slash-and-kick basketball. It’s beautiful to watch. However, there’s something fun about watching a player or team throw that convention to the wind, and go to work on the low block.

In 2016-17, about 36 percent of the possessions Thomas used were post-ups, per Synergy Sports — one of the highest numbers in the ACC. Well, he’s upped the ante this season. According to Synergy, 51.1 percent (45 total) of Thomas’ possessions have been post-ups — by far the most in the ACC, so far.

Only four other ACC players have used at least 40 post-ups so far this season, per Synergy: Bonzie Colson, Wendell Carter, Marvin Bagley and Luke Maye. This is quite the group; however, in terms of frequency, none of those players holds a candle to Thomas. Carter is next closest: 37.5 percent.

It’s an effective use of a possession, too. Thomas is shooting 64.5 percent on post-ups — 1.09 points per possession, No. 3 in the ACC (behind only Lennard Freeman and Colson).

Thomas gets the job done on a relatively small number of touches. The southpaw is currently one of only 10 Division I players averaging 12 or more points on less than seven field goal attempts per game, according to Sports Reference.

Freeman and Kerry Blackshear from the ACC join him in this category, too. Dating back to the 1992-93 season,  no ACC player has managed to pull this off over the course of a full season, though.

All of Thomas’ attempts from the field have been on the two-point variety; he’s connected on 70.9 percent — good for No. 6 in the ACC in tw0-point field goal percentage.

Does the dirty work, too

Elijah Thomas is doing more than just score in the paint for Brad Brownell’s Tigers. He’s also been a force on the glass.

Thomas has snagged 21 percent of the available rebounds while on the floor this season. That’s a big increase over last season, too: 14.5 percent. He’s been an absolute bear on the defensive glass: 30 percent defensive rebounding rate.

Also on the defensive end: Thomas is rejecting 1.9 shots per game. Thomas is one of only 20 players currently averaging at least 12 points, eight rebounds and 1.5 blocks per game.