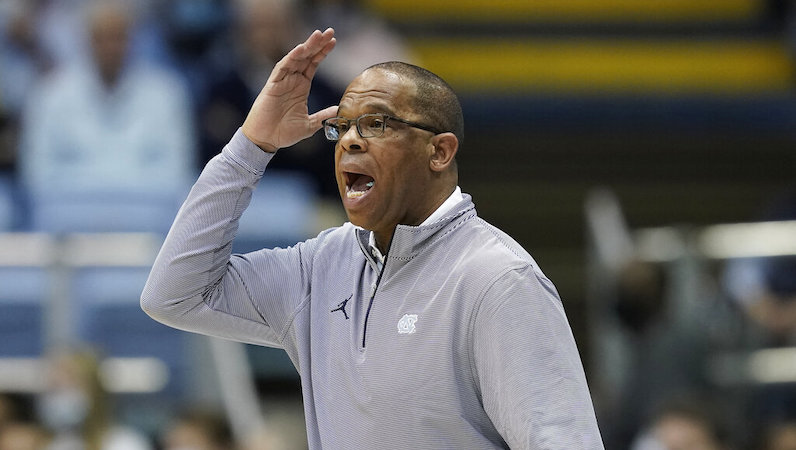 A top prospect in the 2023 recruiting class, GG Jackson, will de-commit from North Carolina and enroll early at the University of South Carolina, according to a report from Travis Branham and 247Sports. Whispers of Jackson flipping his commitment began surfacing last week.

GG Jackson is expected to announce a decommitment from North Carolina and early enrollment at South Carolina in the next two weeks, sources have told @247Sports.

It's a surprising move but one we maybe should have seen coming all along. | Story: https://t.co/6UgTCv5eL5 pic.twitter.com/zX0ADHpkhO

Jackson’s commitment was considered a major recruiting win for Hubert Davis and UNC. If Jackson does indeed reclassify to the 2022 class, enrolling early at UNC would have been problematic as the Tar Heels currently have no open scholarships for the 2022-23 season after the commitment of incoming transfer Pete Nance.

How did we get here with GG Jackson?

North Carolina experienced some roster turnover this offseason, although not as much as anticipated prior to the Final Four run. With the return of Armando Bacot, Leaky Black, RJ Davis and Caleb Love, UNC returns 80 percent of its starting lineup; Nance will serve as a wonderful replacement for Brady Manek, now with the Charlotte Hornets in Summer League.

Scouting report on Northwestern PF/C Pete Nance — more on his touch, movement shooting capabilities, work as a DHO hub + frontcourt facilitator, plus what a potential fit would look like if Nance were to exit the Draft for UNC https://t.co/OBl3Q8wore

In fact, Hubert Davis had just one scholarship to work with in the transfer portal, which followed the departure of wing Kerwin Walton, now at Texas Tech. That’s a good problem to have, but it’s still a roster constraint.

Nance, however, tested the 2022 NBA Draft process. Instead, he elected to return to college ball, following four years with Northwestern. After an official visit last month to Chapel Hill, Nance committed to UNC, which filled the roster for next season. Around the same time, murmurs started to leak: Jackson was considering reclassifying and committing elsewhere. What started as rumors now has real momentum.

A change of heart from Jackson would leave UNC with 5-star combo guard Simeon Wilcher as the lone commitment at this point in the 2023 recruiting cycle.

Jackson hails from South Carolina; it’s believed that the Gamecocks were among the favorites to land the 6-foot-9 talent prior to the dismissal of former head coach Frank Martin. Once Martin was let go, that pushed things in North Carolina’s favor, while Duke fell out of the race, too.

Jackson is a big-time prospect for the next level — the NBA. This route will allow him to play for his hometown team while getting to the NBA a year earlier, although it’s worth noting that the 2023 Draft projects to be crowded at the top.