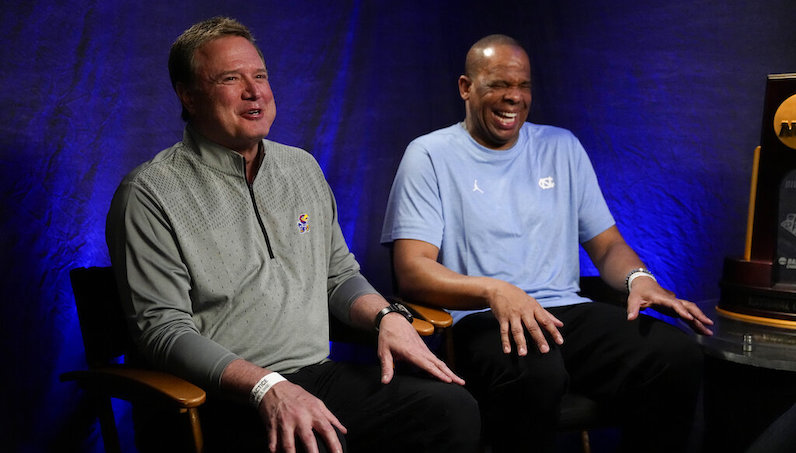 With an eye on the future, North Carolina basketball has extended two scholarship offers over the last 24 hours.

First, UNC extended an offer to Drake Powell, 2024 small forward from nearby Pittsboro (NC). Powell is a Top 75 prospect in the 2024 class, per 247 Sports, and one of the top players in the state of North Carolina. The Tar Heels have been after the 6-foot-5 Powell, a 4-star prospect, for some time now.

Head coach Hubert Davis is the one who called and offered Powell the scholarship. Powell took an unofficial visit to UNC back in January, too, when the Tar Heels hosted Virginia.

Prior to that influx of scholarships, though, another Triangle-area ACC program offered Powell, too. Last November, Kevin Keatts and NC State were the first program to offer Powell.

After an amazing call with Coach Davis, I’m blessed to receive an offer from the University of North Carolina 🐏 ‼️ pic.twitter.com/phsViD7Ne3

Over the weekend, Power put up some monster performances for BABC while participating at the Nike EYBL event in Kansas city. According to Inside Carolina, Power put up 33 points, 10 rebounds and six assists in a game Friday night, while he followed up with a 41-point performance on Saturday. Overall, Power shot 45 percent from beyond the arc (18-of-40 3PA) and 82.6 percent from the foul line (38-of-46 FTA).

That stretch profile of Power would fit nicely into North Carolina’s offensive scheme under Davis.

Busy day at the office

The competition for Power will be stiff, though, as his stock continues to rise, too. Virginia offered Power and he took an official visit to Charlottesville at the end of May. A few weeks later — in the middle of June — Power took another official visit to Notre Dame.

Prior to that, Power took an official visit to Iowa last fall. Along with UNC, Kansas and UCLA have also extended scholarship offers to Power. Wake Forest, Indiana and Ohio State are also in the mix.