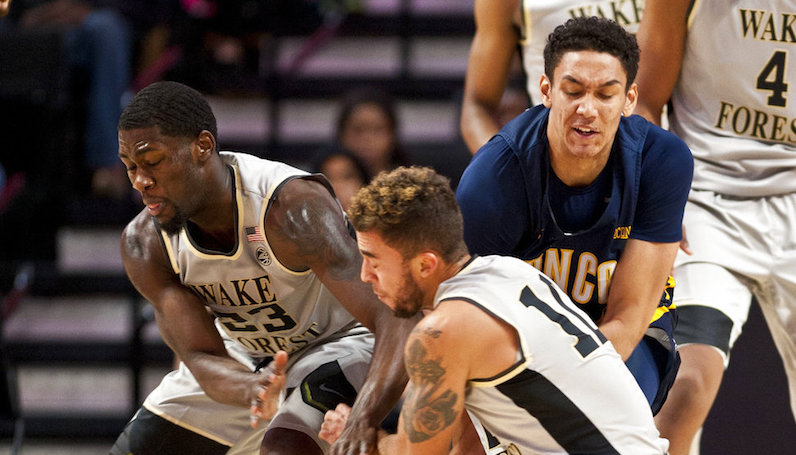 Chaundee Brown (23 and Mitchell Wilbekin of Wake Forest battle Kyrin Galloway of UNC-Greensboro for a loose ball in the first half of an NCAA men's basketball game, Friday, Nov. 24, 2017 at Joel Coliseum. (Walt Unks/Winston-Salem Journal via AP)

When Chaundee Brown signed up with Wake Forest, he became the program’s highest-profile recruit in nearly a decade. The fit seemed cozy, too: Brown made sense aligned with Bryant Crawford, Keyshawn Woods and Doral Moore. Even in the surprising season-opening loss to Charleston Southern, Brown put up points — 21, to be exact, on 8-of-12 shooting. They hype seemed real.

Brown put up 20-plus points four times as a freshman — three of which came against ACC opponents, including top-50 defenses in Louisville and Miami. He certainly had some strong moments for the Demon Deacons; however, inconsistent minutes clouded a rookie season that had its moments.

Despite having just one game with four personal fouls (the loss to Liberty), Brown played under 20 minutes in 17 of his 30 games as a freshman.

For the year, Brown finished with a stat line of 7.6 points, 34.2 3P% and three rebounds. He dished out just 2.2 assists per 40 minutes (10.7 percent assist rate), and attempted less than three free throw attempts (2.8) per 100 possessions. Brown never attempted more than four free throws in any game as a freshman. If Brown had a big scoring game, it meant his jumper was falling — from deep and the midrange.

Unsurprisingly, Brown’s most-used possession type as a freshman was the spot-up; according to Synergy Sports, nearly 46 percent of his possessions were spot-ups (120). Of those 120 possessions, 60 resulted in no-dribble jumpers: 22-of-60 FGA (36.7 FG%, 51.7 eFG%). That’s not bad, but there’s room for growth here.

(Quick note: 25 of Brown’s 27 three-pointers were assisted on — 92.6 percent. He was dependent upon Bryant Crawford’s slash-and-kick game last season.)

Of the 56 ACC players to record at least 50 of these possessions, Brown ranked 44th in efficiency: 1.03 points per possession, per Synergy. If Brown can lock in that jumper, it should better set-up his ability to beat closeouts.

And Brown should absolutely look to attack more — he shot 60 percent (small sample size) on drives to the basket from spot-ups, and 54 percent overall at the rim. He attempted just 31 free throws last season, but made 25 — good for 80.6 percent. These are all solid numbers. Basically, Brown should be looking for additional contact and channels to drive the ball.

Nearly 37 percent of Brown’s field goal attempts this season came from beyond the arc. That’s a healthy rate, but it wouldn’t hurt to see that inch north of 40 percent, either. The name of the game for Brown should be: fewer midrangers, more threes and a greater volume of attempts at the rim. (Only 25 percent of his half-court FGA came around the hoop, per Synergy.)

A midseason jump and source of encouragement

The best stretch of Brown’s young career started in late January and ran into the first week of February. Over a five-game stretch, which included a win over Florida State, Brown scored 15-plus points four times. Brown averaged 28.6 minutes and 14.6 points (56.6 FG%, 46.2 3P%, 52.4 eFG%) in this run.

The rookie wing even flashed some play-making skills in the loss at Duke, when he dished out a career-best five assists — a 34.2 percent assist rate.

This is exactly the type of offensive game Wake Forest needs from Brown in 2018-19. If you want to be optimistic about Brown’s sophomore campaign, this run should give you some confidence.

As the good folks at Blogger So Dear noted on multiple occasions last season, Chaundee Brown has some defensive upside, which is notable for Wake Forest. I’ve discussed this topic in this space before: Wake has had all kinds of issues defensively under Danny Manning. I think a few small tweaks, though — like a more conservative approach to pick-and-roll coverage — would help on the margins. Ultimately, though, Wake needs players that want to defend.

Can Brown help lead that charge? Can he become a stopper on the wing?

That’s probably heaping too much on Brown, at this point; however, help could be on the way. Rangy forwards Jaylen Hoard and Isaiah Mucius — both top-100 prospects — arrive as the headliners in Wake’s 2018 class. Brown, Hoard and Mucius should make the Deacs more athletic and versatile on defense, although some projections aren’t so rosy.

Finally, steals are far from the best metric in evaluating defense, but they certainly have value, too. Brown snagged just seven steals in 628 minutes of action last season (0.6 per 100 possessions). This is another opportunity for Brown: create more turnovers on defense. In 2017-18, Wake Forest ranked 225th nationally in opponent turnover rate (17.5 percent).