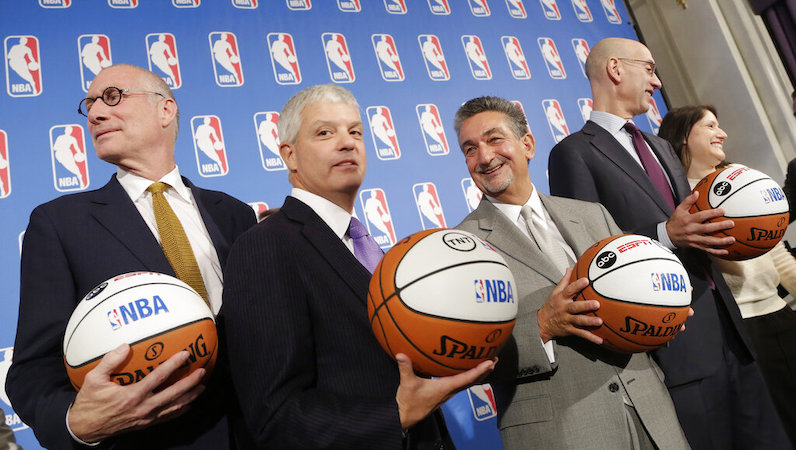 ESPN President John Skipper, left, David Levy, second left, President of Turner Broadcasting System, Ted Leonsis, second right, owner of the Washington Wizards, and NBA Commissioner Adam Silver, right, stand with basketballs for a portrait after a deal was announced between the league and TV networks, Monday, Oct. 6, 2014 in New York. The NBA has extended its television deals with ESPN and TNT for nine years. The league announced Monday that the new contracts will run through the 2024-25 season. The previous eight-year agreements end after the 2015-16 season. (AP Photo/Mark Lennihan)

During an appearance last week on The Dan Le Batard Show with Stugotz, former ESPN president and co-founder of Meadowlark Media John Skipper discussed a variety of topics regarding college athletics and broadcast rights.

A good chunk of the conversation centered on the ACC: it’s challenges and the necessity to add Notre Dame as a full-time member.

Skipper, an alum of UNC, believes in the vision of the Power 5 shifting to four conferences, each with 16 teams. Obviously, the Big Ten and SEC are already headed in this direction. Beyond that, the ACC, Pac-12 and Big 12 are fighting for survival. Of that group, Skipper believes the ACC is best positioned, despite the many existential concerns.

(Audio via The Dan Le Batard Show and Meadowlark Media)

One of the reasons Skipper remains (relatively) optimistic on the ACC is the interest it would hold as the premier basketball conference — thank you, Duke and UNC — if this four-conference model cut the NCAA out of March Madness.

Now, that may seem like a big “if” and, obviously, all of the trend lines show that football is what drives television interest and advertisement dollars. However, every year the country turns its attention to March Madness and the NCAA Tournament.

As is currently constituted, the NCAA partners with CBS and Turner sports to broadcast the 68-team event. That deal runs through 2032 — following an extension back in 2016. Based off that 2016 extension, the yearly average to broadcast the event will hit $1.1 billion starting in 2025.

As Skipper points out, half of that money goes to the universities. However, a reality exists where the schools decide that they no longer need the NCAA; they’ll throw their own tournament and keep all of the money.

It roughly throws off a billion a year and the schools get $500 million of that. If they ran their own tournament, and it ran off $1.2 billion, which it would, they would keep all of that. You cannot tell me that those 64 schools won’t do that math and go, “Hmmm, here’s a way for us to get more money.”

By the way, that is a place where — if I’m the commissioner of the ACC — I believe I’m gonna narrow the gap on revenue because I have the best basketball conference.

Can you walk a mile in Cinderella’s slippers?

This type of thinking makes sense for television executives and shareholders within the power conference structure. It’s worth questioning, though, what would happen to mid-major programs and March Madness.

Yes, when it comes time for the Sweet 16 and the Final Four, viewers like to see traditional power programs play. The proverbial blue-bloods reign supreme. In the early rounds of the event, though, upsets are part of the fabric of the event, part of what make it special and unique. A small program like UMBC can beat Virginia; announcers scream with glee, fans go crazy, players and coaches cry. That type of drama — the Cinderella story, backdropped by the sound of shattered brackets — is television gold.

Under this four-league, 64-team hypothetical, it’s worth wondering: would those 64 schools still want to include mid-major programs and automatic qualifiers? Unfortunately, that seems unlikely, especially if it’s to impact their own bottom lines.

Last week in Charlotte, ACC commissioner Jim Phillips made multiple references for the importance of college sports to be an inclusive industry — for all sports and conferences. Phillips was all over the place, rarely addressing some of the very real concerns his league faces. Would Phillips be willing to wave these public-facing beliefs if it meant him leveraging the strength of the ACC to improve its long-term sustainability?

Next Up: Examining the ACC’s One-and-Done candidates for the 2023 Draft