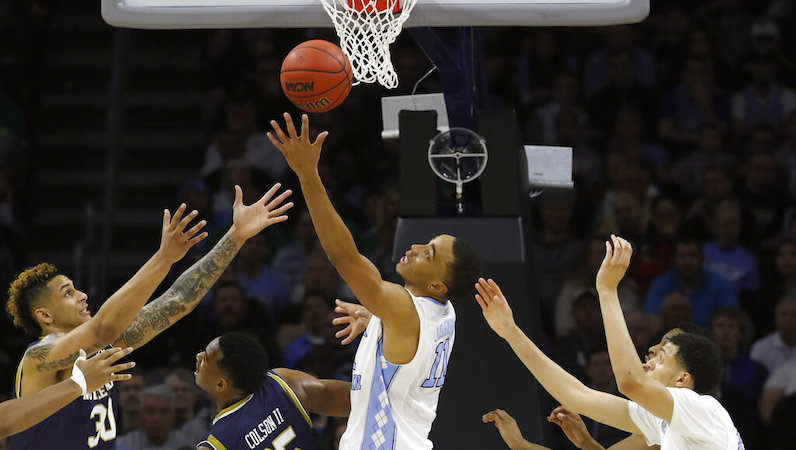 For the time being, it doesn’t seem as though UNC fans have much to worry about with regards to GG Jackson. Back in late April, the 5-star power forward from South Carolina committed to North Carolina — over Duke, Georgetown, South Carolina, UMass (Frank Martin) and the G League.

In the moment, Jackson’s commitment was a powerful addition for Hubert Davis; less than a month after UNC’s run to the national title game, the program landed Jackson, a 5-star recruit and a Top 5 prospect in the 2023 class. 247 Sports ranks Jackson, currently, as the No. 1 player in the 2023 cycle. Plus, with the 6-foot-9, 210-pound Jackson in the fold, UNC could pair him with Simeon Wilcher, a 5-star combo guard who committed last October.

In recent weeks, however, there have been some interesting murmurs. Initially, chatter sprung up on various message boards: if UNC couldn’t land grad transfer Pete Nance, could/would Jackson reclassify and join the program in 2022?

Will get to clipping today's game shortly. #UNC #USABMU18 https://t.co/Gz18dQtCAl

Earlier this week, Jamie Shaw of On3 reported that Jackson will explore the possibility of reclassifying to the 2022 class, then entering a loaded 2023 NBA Draft. Jackson, who has a December birthday, could be eligible for the 2023 Draft if he were to reclassify.

Of note: North Carolina has no scholarships available for the 2022-23 season. With Kerwin Walton headed to Texas Tech, Davis had only one scholarship to play with in the transfer portal; that, of course, went to Nance, who will be one of the best players in the ACC next season. He’s a big-time frontcourt talent and he fits perfectly with the four returning starters.

In theory, UNC was set to run it back with RJ Davis, Armando Bacot, Leaky Black, Caleb Love and Nance. After the 2022-23 season, Jackson and Wilcher would arrive, set to star with sophomore-year Trimble.

Unfortunately for North Carolina, that chain of events is only theoretical. More steam has continued to pick up on Jackson flipping from UNC to another program, while also reclassifying.

On Friday, Adam Rowe of The Devil Den (the 247 Sports site that covers Duke) altered his prediction for Jackson — from UNC to South Carolina, now coached by Lamont Paris.

2023 5🌟 Gregory “GG” Jackson (@_ggjackson) has picked up a crystal ball prediction for @GamecockMBB via @247Sports. Jackson is currently committed to UNC.

Currently, Rowe is the only 247 Sports expert to flip Jackson to the Gamecocks. However, no other analyst has made a prediction since the day Jackson committed to UNC.

North Carolina online fans can claim that Rowe, who covers Duke, is trying to stir the pot. For those going that route, proceed with caution. Rowe isn’t the type of reporter to traffic in these types of interactions, nor is he someone that’s careless with his predictions.

Jackson remains a UNC commitment; if he arrives in Chapel Hill in 2023, all will be well for the Tar Heels. However, there may be a little more here than meets the eyes.

Led by Duke’s Dariq Whitehead, a look at the ACC’s top one-and-done prospects for 22-23