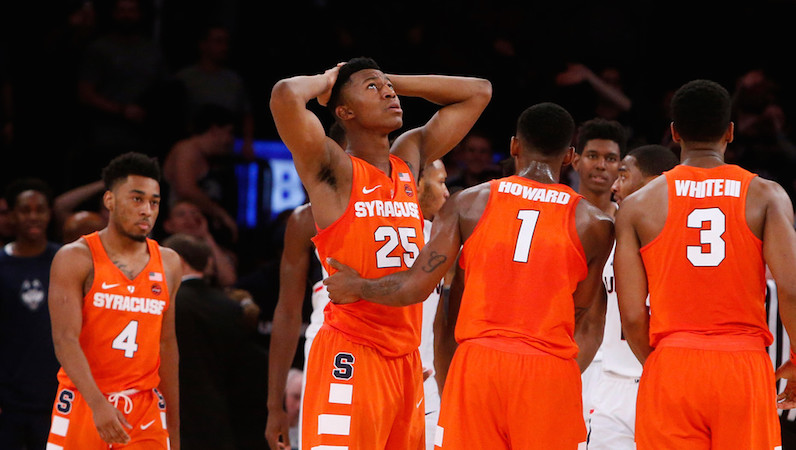 Syracuse's Tyus Battle (25) is comforted by teammate Franklin Howard (1) after committing a foul in the final seconds of an NCAA college basketball game against Connecticut. (AP Photo)

About 10 days ago, Syracuse star guard Tyus Battle declared for the 2018 NBA Draft. Battle, however, is yet to sign with an agent, which means he could still return to Syracuse for his junior season. This past weekend, a report trickled out that Battle received an invitation to the draft combine next month (May 16-20) in Chicago.

There’s some variance in Battle’s draft stock; he appears to float between 20 and 40 in terms of pick range. In some places, he’s viewed as a late first round pick.

However, there’s no variance in the fact that in Battle stays in the draft that Syracuse will have to work hard to replace his impact and production.

Also dating back to the 2009-10 season, Battle is one of only three players to average over 40 minutes per game in conference games. Battle played in 99 percent of Syracuse’s available minutes in ACC games, too, per KenPom — No. 1 in the nation.

Pick-and-roll menace Jon Elmore of Marshall and Battle were the only two players in the nation this season to play 38 minutes per game with a usage rate north of 28 percent, too.

Unable to stand around

So, it’s easy to see that Battle played a ton of minutes while scoring over 19 points per game. However, it’s worth noting just how active Battle was on the floor, too.

Now, Syracuse’s offense isn’t exactly high on ball or player movement; most of the team’s possessions this season involved Tyus Battle and Frank Howard passing the ball around, then eventually shooting over the top of the defense. That said, Battle was asked to do more than anyone in the ACC.

According to Synergy Sports, Battle accounted for 27 percent of Syracuse’s total possessions — which translates to 758. This season: only 23 Division I players this season accounted for 700 or more used possessions. Of those 23, only three hail from Power 5 programs: Battle, Trae Young of Oklahoma and Penn State’s Tony Carr. Young and Carr have both declared for the NBA Draft, and will hire agents.

A lot will fall on the shoulders of a few players if Battle remains in the NBA Draft pool. At the top of the list: Oshae Brissett and Frank Howard, who also played heavy minutes and were high-usage players for Jim Boeheim this season. Marek Dolezaj could help alleviate some of that workload, too.

As of right now, Syracuse has an incoming recruiting class of just two players: 4-star guard Jalen Carey and Buddy Boeheim. Carey, a top-60 prospect, could be ready for a serious role from Day 1, too.

It will be interesting to see if Syracuse looks to add a graduate transfer — someone that could contribute in the 2017-18 season.

3 reasons why Oshae Brissett is so valuable to Syracuse Basketball