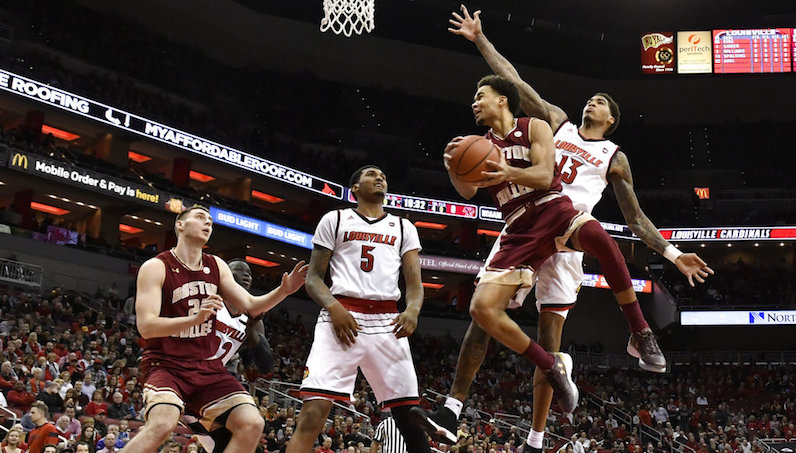 Two years after Dudley was named All-American, Boston College made the 2009 NCAA Tournament. The Eagles have yet to return to the Big Dance since then, though, and it’s safe to say that the last decade of Boston College basketball hasn’t been the program’s most fruitful.

However, that could change in 2017-18 with Jerome Robinson. If the Eagles squint hard enough, an NCAA Tournament bubble is on the horizon (albeit unlikely). That would obviously take quite the effort over the team’s final eight ACC games. But regardless of his team’s win-loss results, Robinson is making a strong case to join Dudley, Smith and Troy Bell as BC All-Americans.

A bag of Combos

No perimeter player in the ACC has better blended playmaking and shotmaking this season than Jerome Robinson. While on the floor this season, Robinson has assisted on 20.1 percent of his teammates’ made field goals, and used 25.5 percent of Boston College’s possessions. This means that when Robinson is in the game, over one-quarter of BC’s possessions end with him shooting, turning the ball over or drawing a shooting foul.

Robinson is the only player in the ACC with an assist rate of 20 percent, a usage rate of 25 percent and a three-point shooting clip of 40 percent. According to Sports Reference, only 19 other Division I players are currently at these benchmarks, too.

In ACC play, Robinson has lifted his game to an entirely different level, though: 23.1 points, 3.4 assists and 3.5 rebounds — 55.1 percent shooting, 50 percent three-point shooting (28-of-56) and 68 percent true shooting. That is absurd production and efficiency.

For the season, Robinson is the only player in the ACC scoring 18 points per game, and also shooting at least 40 percent from beyond the arc and 80 percent from the free throw line.

According to Synergy Sports, Robinson is scoring 1.06 points per possession (57.6 effective field goal rate) in the half-court, which ranks 44th in the nation (amongst players with at least 300 possessions). Only three ACC players have scored more points in the half-court than Robinson:

Ace in the Pick-and-Roll

Part of what makes Robinson such a gifted player is that at 6-foot-5 he can run a pick-and-roll with the best players in America. The junior is shooting 47.5 percent out of the pick-and-roll (No. 7 in the ACC), and scoring one point per possession (No. 3 in the ACC), according to Synergy.

Boston College keeps humming on offense even when Robinson shifts gears and turns into a passer out of the pick-and-roll, too. He doesn’t need to be a desperate chucker. Robinson’s teammates are shooting 42 percent from the field after he hits them with a pass from the pick-and-roll.

In total, the Eagles score 0.99 points per possession on pick-and-roll possessions when Robinson is either a shooter or passer — No. 6 in the ACC (minimum 100 possessions).

A Jump in his Jumper

You can tell that Jerome Robinson put a lot of time last offseason into working on his jump shot. His true shooting and effective field goal rate have both jumped 10 percentage points, which is an incredible leap. Robinson’s efficiency has risen across the board — both off the catch and off the bounce — a critical development for his NBA prospects.

During the rookie season struggles of Markelle Fultz, which have unfortunately devolved into viral sessions of mockery and concern, it’s been easy to forget how prolific of a shooter he was as a freshman last season.

However, one of the reasons Fultz went No. 1 in the 2017 NBA Draft — with Philadelphia trading up to have the opportunity to select the Washington guard — was his ability to shoot off the dribble. Well, the numbers Fultz put up last season in Seattle, as a freshman, actually pale to Robinson’s.

“Be quick but don’t hurry”

This is easily Jim Christian’s best team since arriving at Boston College. The Eagles rank inside the top 100 in both adjusted offensive and defensive efficiency, per KenPom; BC also has wins over Duke and Florida State.

Over his three-year career, Robinson has created some NBA buzz as a big wing that can play both guard spots, shoot and create steals on the defensive end. He’s a decent athlete, too; Boston College will run alley-oop plays for him in the half-court.

There’s certainly a chance that Robinson could decide to jump to the the professional ranks after this season. Robinson will absolutely make money playing basketball in his future — whether it’s after this season, or the next. If he did decide to enter the 2018 draft, though, the ripple effect could be tough for Boston College and Christian.

Starting with Tuesday night’s game at Notre Dame, there should be some level of urgency to make these final eight regular season games — plus the ACC Tournament in Brooklyn — count. If Boston College is to sneak into the bubble conversation, the Eagles needs to start pulling off some upsets.

If that doesn’t happen, who knows when the opportunity could present itself again.