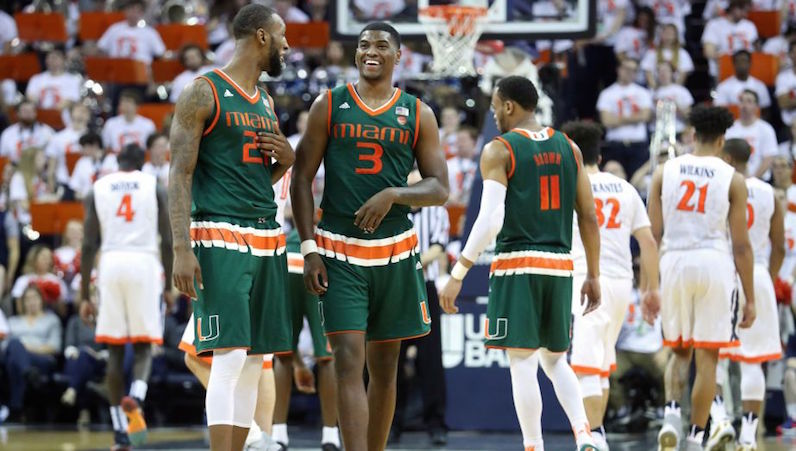 Miami has more hype heading into next season than maybe ever before. And no, this isn’t about football; this is basketball.

A lot of that attention has centered on the team’s star-studded backcourt: the ubiquitous Bruce Brown, ball-screen menace Ja’Quan Newton and 5-star freshman Lonnie Walker.

Walker is unfortunately dealing with a torn meniscus that he injured in an early July practice; he is, however, expected to be back for the team’s opener.

Up front, without Kamari Murphy — one of the best defenders in the ACC last season — Miami has a lot of minutes up for grabs in the post. That will likely be gobbled up by Ebuka Izundu and promising sophomore big Dewan Huell.

However, the Hurricanes have another key departure to overcome, too: forward Davon Reed — now a member of the Phoenix Suns.

This is where junior wing Anthony Lawrence Jr. comes into the picture.

Ready for an expanded role

Anthony Lawrence put together a solid freshman campaign two seasons back; the 6-foot-7 forward didn’t play a lot (12 minutes per game), or use many possessions (16.6 percent usage rate), but he was an efficiency darling. Lawrence posted a team-best offensive rating of 126.6 points per 100 possessions, per KenPom.

This was the product of a relatively low turnover rate (11.4 percent) and some efficient shooting — 58 percent on two-pointers, 42.9 percent on triples.

As a sophomore, though, Lawrence took on a much larger role within the team. His minutes more than doubled, and that his efficiency dipped, too. Lawrence was a slightly above-average three-point shooter on a good number of attempts — 35.4 percent on three attempts per game.

Lawrence was still a very productive player. He can capably guard three positions, and was one of only 15 ACC players to average better than 1.5 assists per game, one steal per game and shoot above 35 percent on three-pointers.

He also showed enough on both ends of the court to warrant some excitement for next season, too. Lawrence, who started 18 games last season, needs to stay steady on defense, cut down on turnovers and take his range shooting to another level.

Where does he fit?

For his first two seasons in Coral Gables, Anthony Lawrence has used just 16.1 percent of his team’s possessions while on the floor — a below-average rate. This means that only 16 percent of Miami’s possessions end with him shooting the ball, turning it over or drawing a shooting foul.

With so much playmaking in the backcourt, though, it’s tough to see Lawrence becoming a featured player. That, however, doesn’t mean he won’t be counted on more heavily.

Miami’s offense, which is heavy on ball screens, needs floor spacers to draw attention on the weak side of the floor. That’s where Lawrence can do damage.

Tighten up around the edges

That’s pretty good, but if Lawrence can raise that slightly to an effective field goal rate north of 60 percent, then the Hurricanes will really be in business. He’s capable of big performances, too. Lawrence had 19 and 18 points, respectively, in wins over NC State and Stanford last season.

Lawrence also saw his turnover rate balloon 21.6 percent in 2016-17, per KenPom. That’s way too high and is nearly double his freshman season rate. His efficiency numbers will jump back up if he can trim some fat here, too.