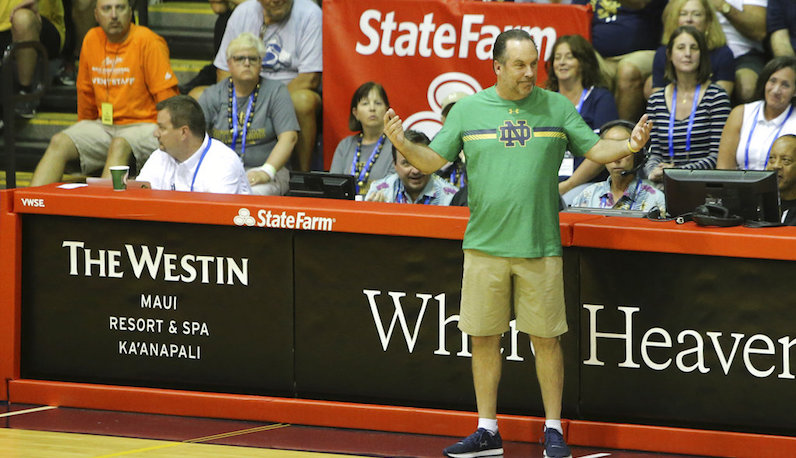 Notre Dame head coach Mike Brey reacts after a referee stopped the game and warned him for being outside the coach's box during the first half of an NCAA college basketball game against LSU, Tuesday, Nov. 21, 2017, in Lahaina, Hawaii. (AP Photo/Marco Garcia)

Brey led his undefeated squad to three wins by a combined 67 points in Maui — all while clad in t-shirts and shorts. When it came time to design a championship-winning play, the most relaxed man in the gym — Mike Brey — looked and played the part.

After carving up LSU in the Maui Invitational semifinal (1.42 points per possession), Notre Dame saw its offense sputter in the first half against the menacing defense of Wichita State. The Irish mustered just 23 points in the first 20 minutes — a number seemingly impossible for an offense that features Bonzie Colson and Matt Farrell.

In the second half, though, Notre Dame corrected itself. Brey’s club outscored the Shockers 44-29, and came back from down 16 points to win. Notre Dame trailed for most of the game, but a pair of free throws from Martinas Geben with 2.3 second gave the Irish a tournament championship.

Here’s how Geben got to the line.

After a Colson bucket, which was created by an incredible Farrell steal, Notre Dame closed within one point of the lead, 66-65. Next: Wichita State’s Austin Reeves missed the front end of a 1-and-1; the door cracked slightly more for Notre Dame.

Farrell missed a shot (blocked by Zach Brown) and a jump ball situation ensued as players went for the rebound. Thanks to the the hustle of Rex Pflueger, and the possession arrow, the ball belonged to Notre Dame. Mike Brey called a timeout; now is when things got really good.

The Design: Dress for Success

Pflueger is the trigger man, and T.J. Gibbs, who had an outstanding tournament in Hawaii, spaces to the weak-side of the floor. This is to draw an extra help defender out of the picture. Keep an eye on the spacing here; all four Notre Dame players are at least 18-20 feet from the basket; the lane is wide open.

As soon as Pflueger has the ball, Farrell jets off staggered screens from Colson and Geben. That’s the initial action, and it’s created to confuse the defense. Farrell cuts all the way through, and Gibbs cycles to the top of the floor — all of this action draws help defenders away from the point of attack.

Next: Colson swings around another Geben screen. Wichita State actually does decently well here, but the threat of an open Colson is too much — Shaq Morris, the man guarding Geben hedges to the corner. This is exactly what Notre Dame wants; it creates enough of an alley for Geben — a solid rim-runner — to come barreling down. By the way, Geben is shooting 85.7 percent (6-of-7) on rolls to the rim this season, per Synergy.

We talk about it all of the time in this series, and Jay Bilas mentioned it on the broadcast: the person setting the screen is often the most dangerous player on the floor. Morris has to foul Geben to prevent the easy slam dunk. Geben, a career 76.4 percent free throw shooter, has no fear under pressure, like his easy-going coach, and drills both. Ball game.

After the game, though?

Well, you do you, Coach. If you draw up funky, effective plays like that, and win tournaments, you get to basically wear whatever you want.

And you thought Maui Mike Brey’s sideline attire was casual …