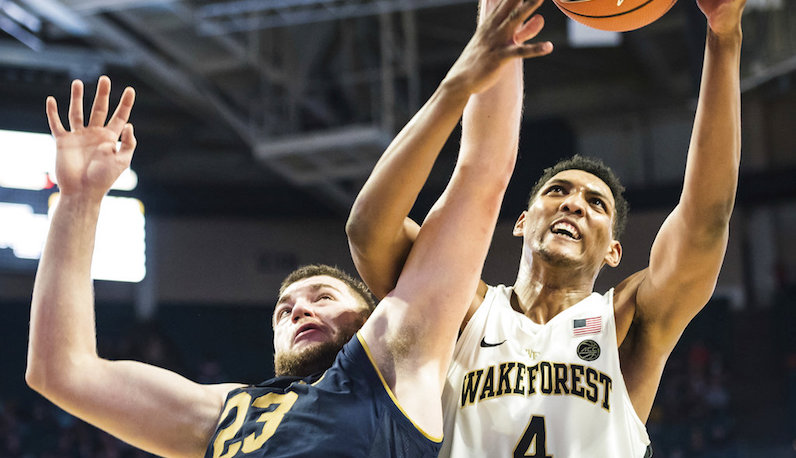 As much trouble as Wake Forest has had stopping any team this season, it’s still worth noting what Doral Moore has done on the defensive side of the floor.

Yes, for the fourth straight season under Danny Manning, defense has been a glaring issue for the Demon Deacons. Once again, Wake Forest is on pace to finish outside of the top 120 in terms of adjusted defensive efficiency, according to KenPom. In fact, Wake Forest hasn’t had a top-100 defense since Dino Gaudio’s final season in 2009-10.

This is a concern for a variety of reasons. However, it is sort of peculiar that Wake has struggled so much defensively this season, despite have one of the nation’s top shot-blockers — Doral Moore.

There are a lot of ways to build a great defense; NBA teams like the Golden State Warriors and Houston Rockets switch everything — confident that their armies of long-armed defensive menaces can curtail any action. The San Antonio Spurs take a different, more conservative approach that walls off the rim. (According to Cleaning The Glass, only 31.1 percent of opponent field goal attempts have come at the rim against the Spurs — the fourth stingiest mark in the league.)

Playing defense at an elite level is hard, like really hard; it requires talent, communication and athleticism. However, it should be easier when your team has a powerful rim protector; at the most basic measure, that should be the foundation for a competent defense — someone to clean mistakes up as the last line of help.

That fact that Wake Forest has this, and still continues to struggle on that side of the floor is a concern.

Let’s take a look at some of the numbers. When Doral Moore is on the floor this season, the 7-footer has blocked 8.8 percent of opponent two-point field goal attempts; that’s a rate that ranks 43rd in the nation, per KenPom. In ACC play, that number has dropped some, but remains a more-than-respectable 7.7 percent — good for No. 7 in the league.

By the numbers, Moore (4.7 fouls per 40 minutes, down from 9.8 in 2016-17) is also an elite defensive rebounder. According to KenPom, Moore has grabbed 28.2 percent of available defensive rebounds while on the court — No. 12 in Division I.

Against ACC foes, though, that number has climbed even higher; Moore has snagged 30 percent of available defensive rebounds while on the court. If this keeps up, Moore will become the first ACC player — dating back to the 2010-11 season — with a defensive rebound rate of at least 30 percent in ACC contests.

Wake Forest’s defense ranks in the bottom third of the ACC in most catch-all defensive metics — save for defensive rebound percentage, thanks to Moore. According to KenPom, opponents have grabbed only 25.2 percent of available offensive rebounds — the lowest rate in the ACC. Even offensive rebounding juggernauts like Duke and UNC have gone below season averages against Wake Forest.

It’s a good thing that Moore grabs so many defensive rebounds, too, because when he doesn’t, it’s instant offense for opponents. According to Synergy, Wake has allowed 1.26 points per possession on put-backs this season, which ranks 345 out of 351 Division I teams.

Moore, according to Sports Reference, is one of only 11 Division I players with a block rate above seven percent and a defensive rebound rate above 25 percent. Two other ACC players join him on this list — Bonzie Colson and Elijah Thomas. At the top of that list is Texas center and future lottery pick Mo Bamba, who has the wingspan of a garage door (unofficial, of course). Texas, by the way, has the nation’s No. 5 defense with Bamba patrolling the back line.

Perimeter and transition defense have been brutal for the Demon Deacons this season,. According to Synergy Sports, Wake Forest has allowed 0.98 points per possession (38.6 FG%, 52 eFG%) on spot-ups this season. That ranks No. 267 in the nation and 13th in the ACC.

Transition defense has been an even bigger issue; Wake Forest ranks No. 301 nationally in defensive efficiency on transition possessions — 1.09 points per possession, according to Synergy. That, too, ranks 13th in the ACC — ahead of only Boston College (1.11) and Pitt (1.18).

Closer to the basket, though, the Doral Moore has made things a challenge. Opponents are shooting just 41.5 percent on post-ups against Wake, and scoring 0.74 points per possessions (No. 68 in the nation), according to Synergy. That’s a team effort, but Moore, who blocks and influences a lot of shots, deserves a lot of credit.

John Collins was the best player in the ACC last season, but as good as he was, Collins and Wake Forest struggled in pick-and-roll defense. Rollers scored 1.08 points per possession (49.5 FG%) with Collins spearheading the defense; go back and watch the NCAA Tournament game against Kansas State — it was a clinic.

This season, however, those number have dipped: 0.87 points per possession (No. 4 in the ACC) on 40.7 percent shooting.

Nowhere to go but up, right?

Doral Moore has the frame of a rim-running NBA center, and some numbers to support that claim — on both sides of the floor. Moore, just three years removed from high school, is still incredibly raw, though. He’s made tremendous strides this season, no doubt (Manning gets some credit for this); however, as an NBA prospect, Moore is still a project.

If Moore does in fact decide to return to Winston-Salem for his senior season, perhaps Wake Forest could build a competent defense around him — one that takes a more mild approach to pick-and-roll coverage, closes out harder on shooters and better limits opposing three-point opportunities.

It may be wishful thinking, but if that happens, Wake should have the firepower on offense to get back to the NCAA Tournament. Only time will tell, although that may be running short, too.

Can Duke basketball once again limit Virginia Tech with its zone defense?