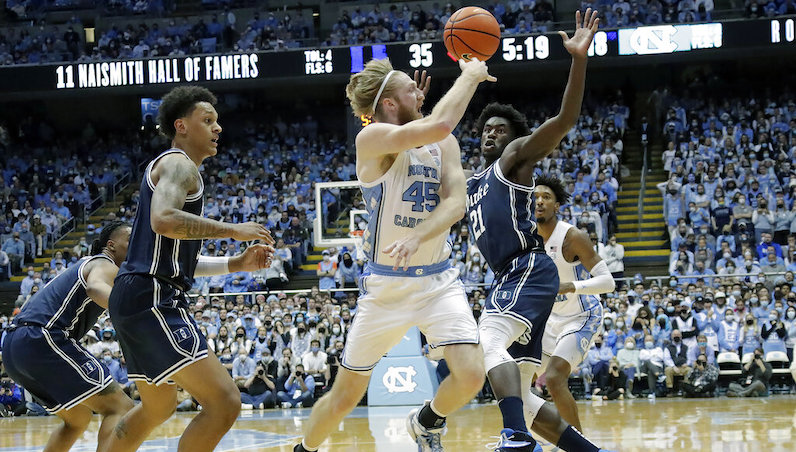 Two weeks back, Hubert Davis and UNC extended an offer to Power. In the second week of July, Power landed offers from Kansas, UCLA, North Carolina and Duke.

The 6-foot-8, 210-pound Power is a 4-star prospect in the 2023 class; he ranks as the No. 53 overall prospect and the No. 12 power forward, per 247 Sports, although that is subject to rise after his Peach Jam performance. During the event, Power averaged an impressive stat line over seven games at the Nike EYBL event: 15.3 points, 8.9 rebounds, 4.9 assists per game.

Power, who played with BABC at the Peach Jam, plays his prep ball for Worcester Academy in Massachusetts.

As Sherell McMillan notes over at Inside Carolina, the visit with UNC will last 24 hours. It will count as an official visit, too. During the month of July, prospects are unable to take unofficial visits, according to NCAA rules. After Aug. 1, though, the calendar will flip for rising senior prospects; players like Power will be able to take five more official visits.

Following Power’s visit to Chapel Hill, he’ll head a few miles east and take another official visit: Duke. The trip to Durham will count as an official visit, too.

However, UNC and Duke aren’t the only ACC teams hot after Power. Wake Forest recently extended an offer. Earlier this summer, Power took official visits to both Virginia and Notre Dame. Currently, On3 Sports projects Virginia as a slight favorite for Power, although things are fluid at the moment.