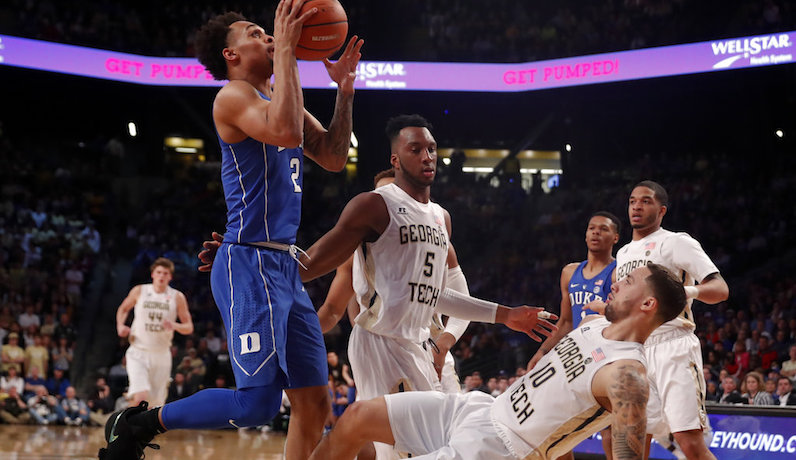 Duke guard Gary Trent Jr. (2) runs into Georgia Tech guard Jose Alvarado (10) and he goes to the basket in the half of an NCAA college basketball game Sunday, Feb. 11, 2018, in Atlanta. (AP Photo/John Bazemore)

The 2017-18 season was a tough one for Georgia Tech basketball. Injuries to returning star players Josh Okogie and Ben Lammers crippled a Yellow Jackets squad that won only 13 games, and lost 12 ACC contests. Georgia Tech ranked 197th nationally in adjusted offensive efficiency, per KenPom. According to Synergy Sports, GT scored just 0.82 points per possession in the half-court last season — No. 317 in the nation.

However, there was a positive addition to last seasons roster — one that had a rare positive impact on offense — was freshman point guard Jose Alvarado.

Prior to suffering a season-ending elbow injury in a loss to Duke, Alvarado — a somewhat unheralded recruit — started all 25 games; the 6-foot Brooklyn product scored 12.1 points, posted an assist rate close to 19 percent and shot 37 percent from deep (7.4 3PA per 100 possessions). (Alvarado is back, healthy from surgery and practicing again.)

As Tech transitions beyond Okogie — a first round draft pick of Minnesota — and Lammers, Alvarado will evolve into a more featured player in Atlanta.

Off the top, one of Jose Alvarado’s key strengths is his ability to snap nets on spot-up looks. According to Synergy: Alvarado scored 1.3 points (65.5 eFG%) per possession on spot-ups, which ranked second in the ACC (minimum 50 possessions).

Alvarado splashed 40 three-points as a rookie — 29 of those were assisted on, too.

It’s crucial for Tech that Alvarado continue this type of clip, and increase the volume, perhaps significantly. (That’s asking a lot.) Last season, the Yellow Jackets — with Okogie and Alvarado in and out of the lineup — ranked outside the top 315 nationally in effective shooting (46.9 eFG%) and three-point percentage (31.8 3P%).

Unless a team is an offensive rebounding juggernaut, there’s basically no way to build a workable offense around that level of perimeter shooting output — and even then, it’s still an uphill battle.

Alvarado can do more than just score, though; he can play-make for teammates, too. As a freshman, he led Georgia Tech in assist rate (18.6 percent), and handed out 5.3 dimes per 100 possessions. This is from an offense that shares distribution duties — to an extent; big men can facilitate as well.

When Alvarado was a passer out of the pick-and-roll last season, Georgia Tech scored 0.83 points per possession (43.8 eFG%), per Synergy. That’s not great, but considering the team’s offensive issues, and lack of shooting, it could be worse.

Incoming 4-star guard Michael Devoe, a top-50 recruit, should help a good deal, though. Devoe has the ability to handle it, too, which should benefit Alvarado by allowing him to get off-ball for catch-and-shoots.

The next step: PNR

Georgia Tech doesn’t run a lot of pick-and-roll; it’s not the basis of Josh Pastner’s half-court offense, which opts to facilitate from the elbows/high-post and look for cutters. Only 9.3 percent of Tech’s possessions were used by a pick-and-roll ball handler last season — 13th in the ACC.

That said: with Alvarado and Devoe, maybe the Yellow Jackets will look for more off-ball/screen shot creation. Alvarado accounted for 23.7 percent of Georgia Tech’s pick-and-roll possession, per Synergy; he scored just 0.73 points per possession (35.7 eFG%). Again, a lack of three-point shooting is big issue here.)