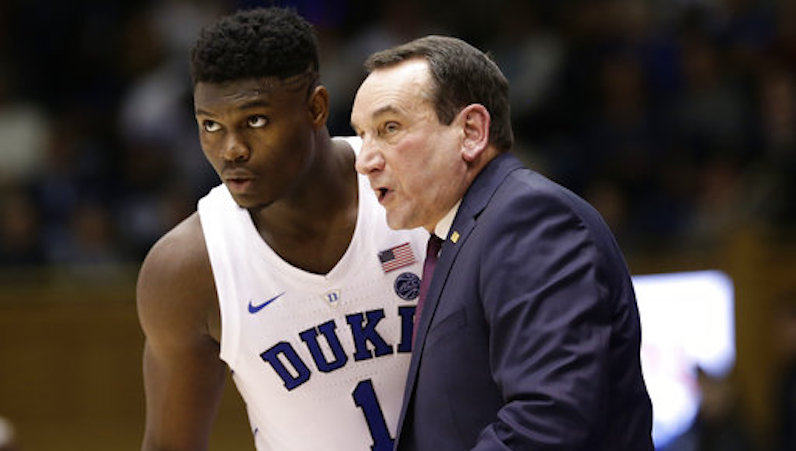 Duke basketball got things rolling early with its 2021 recruiting class; last November, early in his junior season of prep basketball, 5-star small forward AJ Griffin committed. The 6-foot-7, 200-pound Griffin is a consensus top-10 prospect for the 2021 class. Beyond that, Griffin is on early radars as a possible candidate to go No. 1 in the 2022 NBA Draft.

It would be a hilarious overestimation to say that Duke’s recruiting has slowed down some following 2018’s historic haul: Zion Williamson, RJ Barrett, Cam Reddish and Tre Jones. (Also, Joey Baker!) That group, ranked No. 1 nationally, featured four top-15 prospects and three players — Zion, Barrett and Reddish — ranked No. 1 at their positions. With Jones projected to go in the first round of the 2020 NBA Draft, the 2018 class will have four first round picks, including (at least) three lottery selections.

Of course, the 2016 group for Duke was also the No. 1 class in the country, per 247 Sports. That six-person class featured four guys who have already played in an NBA game, including Jayson Tatum, who may as well have been a 6-star recruit.

The only two guys from that recruiting class to not play an NBA game just finished their four-year careers at Duke: two-year captains Jack White and Javin DeLaurier.

Duke’s 2019 class, ranked 3rd nationally, featured only two top-20 prospects: Vernon Carey Jr. and Matthew Hurt. VCJ proved to be a stud; the 6-foot-10, 270-pound low-block tank was the top offensive player in the ACC this season. Carey, however, is far from a lock to go in the lottery of this year’s NBA Draft; in fact, depending on how the board shakes, VCJ could easily slide until much later in the first round.

Of that group, the only other one-and-done player will be high-flying wing Cassius Stanley, a top-40 prospect a year ago out of California. There’s a lot of variance with Stanley’s draft stock; he could land in the back-end of the first round, or slide out of the draft, entirely.

Hurt was a little up-and-down as a freshman, but he still turned out an efficient offensive portfolio. Hurt can really shoot the basketball; he returns Duke, along with Wendell Moore Jr., as one of the league’s top prospects.

Duke’s 2020 class is deep: six incoming rookies, plus Columbia grad transfer Patrick Tape. Forward Jalen Johnson (No. 12 in the 2020 class), a versatile 6-foot-9 playmaker, projects out as a lottery pick. Certainly, one of the other freshmen, like forward Jaemyn Brakefield (No. 40 in 2020) could emerge, too.

This is no knock on the 2019 and 2020 classes; in each of the last two years, Duke has added serious talent to the program. Stanley and Carey are awesome basketball players. Assuming we have basketball next season, the 2020-21 Duke squad is really deep as well. That said, there are reasons why Duke fans should (excitedly) have an eye on 2021.

Griffin is the starting piece, but the Blue Devils are in the mix for several other 5-star prospects, obviously. As far as the backcourt goes, Duke has targeted 5-star point guard Kennedy Chandler and 5-star shooting guards Max Christie and Trevor Keels.

Mike Krzyzewski’s staff is in good positioning with that trio, all top-20 prospects; however, Corey Evans of Rivals has all three of those guys leaning towards other programs. It’s all quite fluid at the moment, but Evans sees Christie as a Michigan State lean, Chandler a Tennessee lean, and Keels to Virginia or Villanova.

Duke may also have multi-year guard talents in Jeremy Roach and DJ Steward, two incoming 5-star rookies for 2020. Again, a lot remains to be determined.

The Blue Devils are also well-positioned for 5-star Patrick Baldwin Jr., a 6-foot-9 power forward with plenty of NBA potential. Experts at both Rivals and 247 Sports have Duke as the favorite.

Griffin and Baldwin would be an incredible duo in Durham, but Duke may be in line for even more frontcourt punch: 5-star power forward Paolo Banchero. The Seattle product, a 6-foot-9, 235-pound force, is the No. 1 power forward in the class. Kentucky and Washington look like the favorites here, but Duke has a shot.

Last week, it was also reported that Duke reached out to Ousmane Dieng, a a 6-foot-9 small forward, who plays at INSEP Academy in Paris.

Coach K has long preached the benefits of position-less basketball; it’s interesting to think of a 2021 class with Griffin, Baldwin and Dieng — all athletic, wingy pieces from 6-foot-7 to 6-foot-9 in terms of height. During the 2018-19 season, Duke was able to tap into some of that with Zion, Reddish, Barrett and Jones. Barrett had his issues as a defender while in Durham, but there was so just much athleticism and length on the floor at the same time, paired with elite point of attack defense from Jones; the Blue Devils were able to consistently switch on defense.

The 2020-21 version on Duke can tap into some of that, too. There are a lot of like-sized players on the roster, which should open the floor offensively for an army of closeout-beaters and switchy defensive pieces.