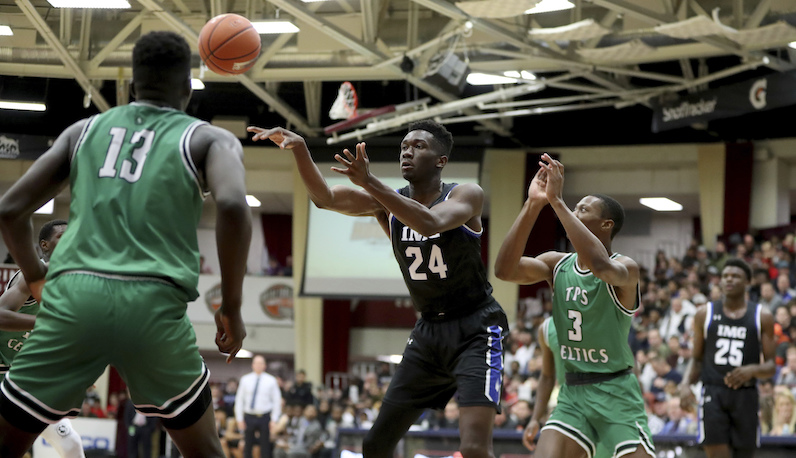 As Duke has transitioned to becoming arguably the premier one-and-done program in the country, the Blue Devils must adapt schematically on both ends of the floor.

Some pieces remain and some concepts carry from year to year; however, Duke’s staff works specific actions in the hopes of tailoring an offense to the roster’s strengths. The 2019-20 team, for instance, ran a far greater volume of pick-and-roll with Tre Jones than it did the year before.

Time is a very real constraint, too. The staff has only a few weeks/months of install time. None of this is easy on the fly.

In each of the last nine seasons, though, Duke ranked inside the top 10 nationally in terms of adjusted offensive efficiency, per KenPom. On an annual basis, Duke is an excellent offensive program.

At times, however, there are frustrations with the scheme. The 2016-17 squad, led by Jayson Tatum and Luke Kennard, turned into a bit of an isolation/spot-up repetition machine. During the 2018-19 season, Zion Williamson could’ve received even more on-ball play-making duties.

That said, even in a simplified form: the product is consistently good. In fact, the last time the Blue Devils ranked outside the top 15 nationally in adjusted offensive efficiency was the 2006-07 season.

(Defensively, we’ve seen plenty of shifts as well. The 2017-18 team zoned up for the second half of the season. With Zion, Jones and Cam Reddish, Duke unleashed a switch scheme during the 2018-19 campaign. The 2019-20 crew was more traditional: drop pick-and-roll, ice side ball screens, with some switch components.)

Now, with Vernon Carey Jr. (likely) set to leave Durham for the NBA Draft, how will Duke reorient its offense in 2020?

Obviously, replacing Jones is atop the list of priorities. It’s no easy task to replace a two-way engine who produced at such a high level, like Jones. However, the loss of Carey could force a cosmetic change for the Blue Devils on offense.

Over the last three years, the post-up has evolved as a critical element of Duke’s half-court attack. With Marvin Bagley III and Wendell Carter Jr., the 2017-18 team averaged just under 10 post-up possessions per game — 9.6, No. 1 in the ACC.

That team also led the country in offensive rebound rate: 38.8 percent. Duke finished the season with 234 dunks in 37 games (6.3 dunks per game); Bagley and Carter accounted for 155 of those spikes, too.

When you have two lottery-bound bigs, Bully Ball makes a lot of sense. (Although it’s worth remembering that one of the best games Carter played at Duke, a Feb. 2018 home win over Louisville, came with Bagley out due to an injury. That night, WCJ functioned more as an offensive facilitator in the handoff and short roll games.)

The following season, Duke posted up far less frequently; however, with the Zion Express leading the charge, the Blue Devils shot over 60 percent on post-ups and finished fifth nationally in post-up efficiency (1.04 points per possession).

Individually, Williamson was brilliant: 1.31 points per post-up possession (75 FG%), easily the best mark in the country, according to Synergy Sports.

During his freshman season in Durham, Carey didn’t quite hit Zion-like levels, but he was really good. Carey accounted for 7.5 post-up points per game on 53.2 percent shooting, per Synergy.

The post-up is a very deliberate action. This is painting with a broad brush, but a post-up requires less screening, player movement and passing to access than, say, a detailed motion set. That simplicity is significant for a younger roster.

Running pick-and-roll action has similar benefits; however, in college basketball, that can become tricky with a wider variance in ball handlers and spot-up shooting.

Even with Jones pulling the strings, Duke’s half-court offense could be shaky this season, at times. A magnet for drawing fouls — 7.9 per 40 minutes, No. 3 nationally — VCJ was Duke’s most efficient source of half-court scoring.

Carey was more than just a post-up bully, though. The freshman big showed the ability to facilitate and pass out of the post. He was also a solid pick-and-roll big, too: 1.5 points per possession on basket rolls, per Synergy.

Next Year: Tape it back up

The addition of Columbia graduate transfer Patrick Tape could be significant. As a junior in 2018-19, Tape averaged 11.3 points, 5.9 rebounds and 1.3 blocks per game; he also connected on 17 dunks that season. More specifically, though: Tape produced out of the post. According to Synergy, Tape shot 58.7 percent on post-ups.

Tape is fairly nimble, despite his size: 6-foot-10, 240 pounds. He’s a sharp cutter without the basketball, and does a nice job presenting himself out of screen-roll action when he dives to the hoop. According to Synergy, Tape shot 88.5 percent on basket rolls during his junior season, which is a monster number.

Along with his pick-and-roll activity, Tape’s work on the offensive glass (11.5 percent career offensive rebound rate) could prove to be his greatest source of value. (His shot-blocking should come in handy on defense, too: 2.5 blocks per 40 minutes during his college career.)

But as an assurance, Duke’s staff has to feel good about having at least one established post-up threat in the rotation next season.

This type of post finish from Tape against Dartmouth is exactly the kind of action that works in Duke’s high-low game: quick seal, catch, spin and finish.

Duke is, of course, set to bring in a bunch of really good rookies, too. With Jordan Goldwire, Jeremy Roach, DJ Steward and Jalen Johnson, Duke has guys that can facilitate and play with the ball in their hands. But what about frontcourt finishers? (Johnson is obviously a major factor here as well.)

Mark Williams, a 7-footer, is a talented athlete, one that can run the floor and finish around the rim. But he needs to add muscle and improve his footwork. Williams will have an impact, but banking on immediate returns in the post seems optimistic. (He does, however, have some possible upside value with his face-up/passing game.)

Jaemyn Brakefield, another lanky and long blue-chip recruit, brings some stretch to Duke’s frontcourt. He’s solid in transition, too. Brakefield projects as a wing, eventually, but his face-up activity could also help. Similar cautious optimism can apply for Henry Coleman, too.

The “X-factor” term is thrown around a little too much when it comes to sports. However, in the case of Matthew Hurt and Duke, it’s applicable.

Hurt entered this season with lottery buzz, and the freshman stretch-4 played well at times. But his role fluctuated as the season progressed; Hurt played just 16.2 minutes per game over the final nine contests. The Blue Devils opted for more small ball, with Wendell Moore Jr. as the de facto 4. And in the bottom of the ninth of his college career, Justin Robinson started to factor in as a space big, above Hurt.

There’s a chance Hurt could still jump the NBA, but with the draft process currently in limbo, all bets are off.

His shooting numbers are quite good: 58 percent effective shooting, 39.3 percent on 3-point attempts (107 3PA). While Hurt’s pick-and-pop game never quite got off the ground (save for his passing in Duke’s Horns high-low sets), he was a good floor-spacer.

With added pace to his release, Hurt (who has a longer shot exchange, with some side motion) can shoot over closeouts. According to Synergy, Hurt posted an effective shooting rate of 69.6 percent on spot-up no-dribble jumpers this season — No. 5 in the ACC.

Hurt certainly doesn’t have the power of VCJ, but there’s upside to his post game. There’s a need to add weight, get stronger (playing through contact), but Hurt has the ability to face up and score. (Added lower body strength would help Hurt establish better, deeper post position.) He uses his elbows effectively to help carve out room; his shooting touch carries down to the block, too.

On a smaller sample, Hurt shot 60.6 percent on post-ups — 1.17 points per possession — according to Synergy.

If Hurt returns to Durham for his sophomore season, there’s a real chance he blossoms as the team’s offensive fulcrum. Those possibilities center more on Hurt’s 3-point shooting and work at the elbows — as opposed to what he could do on the block, hypothetically. Hurt’s range shooting would also be a critical element for helping to create space in the paint. However, there’s some utility for Hurt on the block, too.

(Hurt also needs more counters for when opponents throw hard closeouts at him. Currently, it’s too easy to run Hurt off the 3-point line.)

Up Ahead for Duke Basketball

Right now, there’s still a lot up in the air with how next season’s roster will shake out for Duke. Coach K and the Blue Devils look have a nice mixture of returning talent — especially if Hurt and Cassius Stanley stick around — and incoming prospects. That includes Tape, who could move the needle for Duke in 2020-21.

If guys like Hurt and Stanley do return, Duke’s rotation could get a little crowded. That’s not a bad problem to have, though. As always, it’s good to have options — even when your back is to the basket.