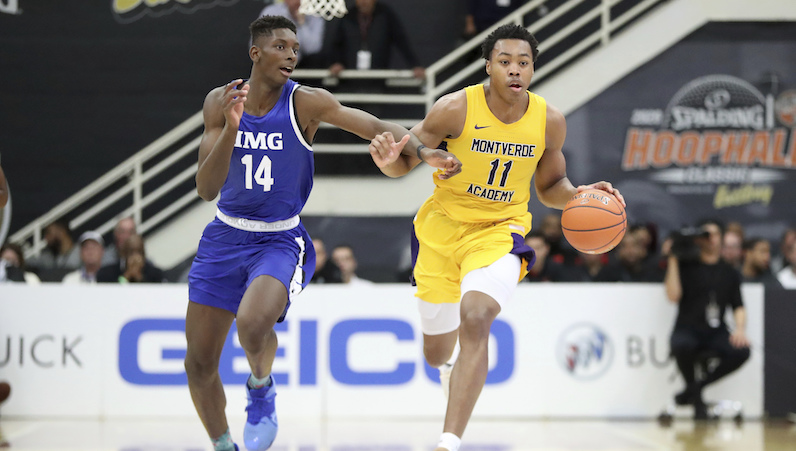 The 2018-19 season marked the second time in a three-year window when the ACC produced the national champion (Virginia) and 10 first round picks in the NBA Draft, led by Zion Williamson. Two years prior, UNC claimed the 2017 NCAA Championship; at the time, a record-setting 10 ACC players were selected in the first round of the NBA Draft. Over the span of three years, the ACC won two national titles and saw 26 former players selected in the first round of the draft (2017-19). This is an incredible amount of success.

The six lottery picks from the ACC are already the most by any conference since the lottery began in 1985. Still two picks to add to it.

This season, much was made about the ACC “having a down year” in men’s basketball. It’s hard to argue that notion. The league ranked a distant fourth in KenPom’s adjusted efficiency margin conference ratings. At the absolute best, only five ACC teams were in line to make the 2020 NCAA Tournament.

On top of the at, Florida State’s Devin Vassell and Cole Anthony of UNC are the ACC’s only two true lottery pick hopefuls. Patrick Williams of FSU will knock on that door, too. (Anthony fell short of his lofty preseason expectations, as UNC tumbled, which added to the league’s perception woes.)

However, the ACC could be set to reload in 2020. Starting with Duke and North Carolina, seven ACC programs land inside the top 35 of the 247 Sports 2020 class rankings.

As the league looks to transition beyond the cancellation of its conference tournament and the coronavirus tragedy, there will clearly be an emphasis on making up for lost time during the 2020-21 season.

With that in mind, here’s a look at some of top incoming players for the ACC. Plus, how will those new guys fit into their college systems?

The list of prospects in this chart doesn’t even factor in the league’s top incoming rookie: 5-star small forward Scottie Barnes, who signed with Florida State last November. (Florida State’s two-man 2020 class ranks No. 46 in the nation.) A top-10 prospect in the 2020 class, the 6-foot-8 Barnes is a do-it-all talent who handles the ball like a point guard.

Florida State is set to lose several key pieces from its elite, switch-all defense. Point guard Trent Forrest recently completed one of the best four-year runs in program history. Sophomore wing Devin Vassell is a monster 3-and-D prospect and could go top 10 in the 2020 NBA Draft — whenever that occurs.

Vassell is an elite help defender; his weak-side disruption skills covered up any would-be holes in Florida State’s switch scheme. Forrest is a nasty, mean defender who can heat up the basketball guarding one-on-one and also cause havoc in passing lanes. They will be missed. But FSU still returns some defensive firepower in the backcourt.

Anthony Polite (3.5 percent steal rate) is a really underrated on-ball defender. It’s all too easy to see him atop Florida State’s hyper-intensive defense — with M.J. Walker and Barnes on the wings, and Raiquan Gray and Malik Osborne in the frontcourt.

Osborne was one of the top role players in the ACC this season; he’s a stretch 5 (36.2 3P%) who can guard 1-5, protect the rim (4.7 percent block rate) and space the floor offensively.

Gray also has intriguing play-making abilities, though he is incredibly turnover-prone (25% TOV rate). With Barnes and Gray, FSU will feature two of the league’s top frontcourt creators. It will be interesting to see how Leonard Hamilton and Stan Jones work to build an offense around their talents.

The six signees in Duke’s 20202 class are the most Coach K and the Blue Devils have inked since a monster class in 2017 (seven total). That group was, of course, led by Marvin Bagley III, Wendell Carter Jr., and Gary Trent Jr., who found a groove as an NBA rotation player this season.

More Gary Trent — quick switch on the Donovan Mitchell, absolutely blows up the drive. Obviously, spot-up shooting is his strength, but the defense has been pretty good, too. pic.twitter.com/Dyz8mOY0kF

The 2020 class is a little different from recent recruiting blends of the Blue Devils; there’s no Zion Williamson or Vernon Carey Jr. in this group — an obvious source of efficient paint scoring. Duke’s 2020 group has plenty of post power, including three power forwards/centers that rank inside the top 50 nationally; however, it may take some time before, say, Mark Williams turns into an automatic bucket-getter on the block.

This group will be led by a dynamic trio on the perimeter: Jalen Johnson, DJ Steward and Jeremy Roach.

Johnson, a fringy top-10 prospect, went through a bizarre final season of prep basketball. Initially at the IMG Academy for the start of the 2019-20 season, Johnson never played a game; he sat out the first semester while recovering from offseason surgery.

In January, though, Johnson returned home to Wisconsin; he played in just eight games for Nicolet High, but managed to average 25.5 points, 10.5 rebounds, and 4.5 assists.

For a brief period, the was concern that Johnson wouldn’t enroll at Duke — after the midseason confusion. That, however, was put to rest. Johnson expects to arrive at Duke in June, provided concerns with COVID-19 have (somewhat) subsided.

Steward and Roach should team up nicely with Jordan Goldwire to form a powerful defensive trio in the backcourt. Joey Baker will return for the Blue Devils, too, which bolsters the team’s perimeter/movement shooting upside. Speaking of upside: Wendell Moore Jr. is likely to return, too.

There’s also plenty of mystery surrounding the outlook for the 2020 NBA Draft. Who knows how that could impact potential NBA prospects from Duke: Vernon Carey Jr., Tre Jones, Cassius Stanley and Matthew Hurt. VCJ is a lock for the first round; Jones is likely to land near the back end of the first round, too. Stanley (who turns 21 in August) and Hurt, however, are huge swing pieces.

Earlier in the week, I wrote a bunch on how North Carolina’s frontcourt, which is set to be one of the best in the country next season. When 5-star centers Day’Ron Sharpe and Walker Kessler arrive on campus, it will create a bit of a logjam with returning bigs Garrison Brooks and Armando Bacot. However, that’s a “good problem” for Roy Williams.

For the fourth season in a row, a new man is set to handle the point guard position for UNC. Once again, it’s a freshman: the heir to this Carolina blue-clad throne is Caleb Love, a 5-star prospect from Missouri.

After a sluggish year offensively in Chapel Hill, Love has a lot on his plate. The ball will be in his hands as North Carolina looks to return to its usual form.

During the 2019-20 season, North Carolina’s assist rate dipped (54.5 percent); the team’s shooting slumped across the board, too, including program lows under Roy Williams in terms of effective shooting (46.4 eFG%) and 3-point shooting (30.4 3P%).

With a tight handle and advanced off-dribble shooting mechanics, Love is more of a score-first guard. That’s not a bad thing, to be clear. Tasked with one of the premier position in college hoops — PG1 in UNC’s go-go system — Love may have to rejigger his play-making quotient, though

Caleb Love with a 40 point game last night. Continues to show more consistency on the jumper, combined with ridiculous space creation & dribble-shot transfer. Reminds me of Dame in those aspects(not a Dame comp). Has an argument for top 5 prospect in the class. pic.twitter.com/txfyC76YPV

Over on the wing, it would go a long way if Leaky Black and Andrew Platek improve their shooting strokes. Those two combined to go just 29-of-120 on 3-point attempts (24.2 3P%) this season. Assuming UNC plays two traditional bigs the vast majority of the time, then it will get cramped offensively if the Heels trot out another non-shooter on the wing, too.

Anthony Harris saw his freshman season cut short — 60 minutes across five games — due to an ACL injury; however, he could certainly play a key role on the wing next season. Is his shooting for real? The sample size is too small to know for sure.