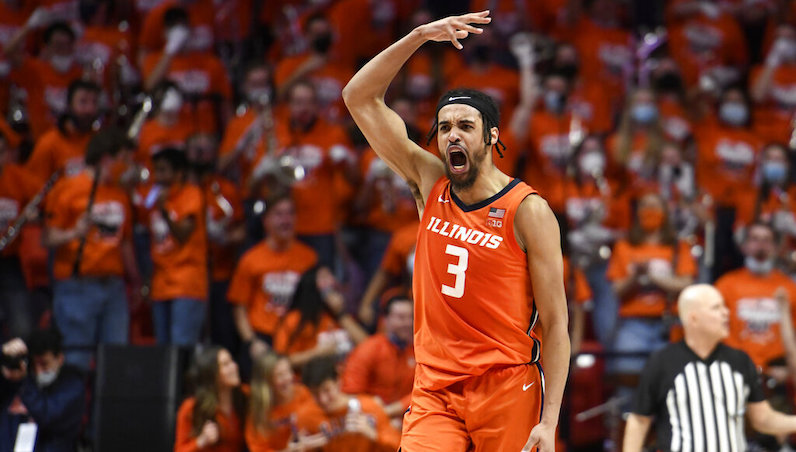 Illinois' Jacob Grandison pumps up the crowd during the second half of an NCAA college basketball game against Ohio State Thursday, Feb. 24, 2022, in Champaign, Ill. (AP Photo/Michael Allio)

Jacob Grandison, a veteran forward who spent the last three seasons with Illinois, may be the final piece for Duke’s 2022-23 roster. Currently, Grandison is on an official visit to Duke.

The competition to land Grandison is rather extensive: Arizona, Kentucky, Oregon, USC, UCLA, BYU, DePaul, Michigan and Iowa State are in the mix. Duke, however, has plenty to offer Grandison, who would fit nicely in the rotation — here’s why.

Duke will host Illinois transfer Jacob Grandison for an official visit this week. More here on the potential fit: https://t.co/5gUYyIlJcL via @TheDevilsDen

Grandison started his college career with Holy Cross; he averaged 11.5 points, 4.8 rebounds and 2.5 assists across two seasons (2017-19). Following the 2018-19 season, Grandison transferred to Illinois, committing late in the offseason.

It makes sense for so many teams to be interested in Grandison, even at this juncture of the offseason. Grandison provides a skill-set that fits on any roster: good size on the wing (6-foot-6, 210 pounds) and 3-point shooting. These are things that pretty much every basketball roster craves.

(Dane Goodwin, Daivien Williamson are there in terms shooting, don't have AST%)

During his college career, Grandison averaged 9.1 3-point attempts per 100 possessions (37.0 3P%). In his two seasons with Illinois, Grandison was primarily used as a floor-spacer; nearly 55 percent of his field goal attempts in that timeframe were of the 3-point variety. It was a blend of volume and efficiency, though, as Grandison connected on 41.1 percent of those attempts.

With Grandison as a somewhat undersized 4, Illinois could space the floor and play 4-around-1 with Cockburn in the paint. As the Rutgers defense converges on Ayo Dosunmu-Cockburn pick-and-roll, Grandison slides in from the weak-side corner for the put-back slam.

As he played with dynamic talents like Dosunmu, Andre Curbelo and Cockburn, Grandison’s usage rate dropped: from 22.5 percent at Holy Cross to 16.9 percent at Illinois. In each of those seasons, though, with Grandison appearing in 60 games (39 starts), Illinois ranked Top 30 nationally in adjusted offensive efficiency, per KenPom. (The 2020-21 team ranked No. 8 nationally in adjusted offensive efficiency, the program’s best mark since the 2004-05 season.)

On this after-timeout (ATO) play vs. Arizona, Grandison delivers the hi lo post-entry pass to Cockburn. The ball eventually changes sides of the floor, after Cockburn (No. 21) is doubled, which results in an open corner 3.

Here’s a simple Horns Hi Lo set vs. Notre Dame. As Cockburn screens and dives, Nate Laszewski (No. 14) slides off Grandison to tag the roll, which leaves the veteran forward open off the catch. When the ball is swung to Grandison, he could look hi lo for Cockburn; however, he catches with plenty of spaces and drains a 3 over Laszewski’s closeout.

According to Synergy Sports, Grandison scored 1.11 points per spot-up possession this season (56.8 eFG%), while scoring 137 total half-court points on spot-ups, a Top 6 number in the Big 10. During his two seasons with Illinois, all but two of his 72 3-point field goals were assisted.

Grandison hopes to now see more playing time on the wing, which is understandable. Before he turns pro, Grandison may want to showcase more perimeter skills on both sides of the floor — on-ball creation reps and on-ball defensive reps.

It’s worth noting, though, that Grandison’s spot-up shooting is his best attribute, and the one thing he should focus on showcasing to professional franchises. Regardless of his position label, Grandison is out there to shoot from deep. His shot profile speaks to that, too: per Bart Torvik’s shot data, only 17.8 percent of Grandison’s field goal attempts in the 2021-22 season were on long 2s.

On this possession, Illinois flows from a Horns set into Chicago action (pindown into a DHO) for Grandison, who starts stashed in the corner. Alfonso Plummer (No. 11) comes off a flare screen from Cockburn, who receives an outlet pass atop the key. Plummer runs to set a down screen for Grandison on Laszewski. Grandison comes off that pindown and into the dribble-handoff (DHO) with Cockburn.

These flashes of movement shooting — relocations and coming off screens — are a valuable component of Grandison’s game. He can do more than simply spot-up and space the floor. This is a skill that Duke’s offense could feature, especially as it hopes to augment a talented bunch of guard/wing creators and frontcourt targets.

Intrigued with the prospect of Tyrese Proctor as a secondary ball handler for Duke next year — from the Hoops Summit: draws the switch vs. Kel'el Ware, then gets Ware + Gradey Dick to lunge out on the step-back and the vision/touch to lead Sidy Cissoko for a rim cut pic.twitter.com/YRmuiVlqpR

With Jeremy Roach back to run the show, Duke has its lead ball handler for next season. Given his level of play to close the 2021-22 season, there should be plenty of optimism around Roach for the 2022-23 campaign. He’s one of the best point guards in the country.

It’ll be interesting to watch Roach work to build pick-and-roll chemistry with 5-star freshman center Dereck Lively, a run-jump 5 who will look to dive, dunk and force defensive rotations.

Jeremy Roach becoming this type of switch-beater for Duke, a guy that can reliably turn the corner against different matchups and make plays in the paint is a massive development — all 7 of his field goals tonight were either in the paint or just outside.

The Blue Devils will support Roach’s creation efforts with 5-star guard Tyrese Proctor, who reclassified from 2023 to 2022, and all-everything 5-star wing Dariq Whitehead. 5-star forward Mark Mitchell will factor into both sides of the mix, too.

Of course, Jaylen Blakes returns to Duke, too. A lightly-used defensive energizers his freshman season, Blakes looks like a solid multi-year development guard. Is he also ready for a larger roll in 22-23?

Young operated as a high-post/elbow hub during his three seasons with Northwestern. Scheyer could look to differentiate his offense and run some actions through a frontcourt target, like Young, Kyle Filipowski or Dereck Lively.

Here’s Filipowski working the elbow at the Nike Hoop Summit, which results in a DHO 3-pointer for future Villanova Wildcat Cam Whitmore.

Regardless, all of these screen-roll actions and half-court sets run better when balanced with premier 3-point shooting. Someone like Grandison — who shoots off the catch and off of movement — is the ideal spacing component to help the offensive flow and rhythm.

Obviously, AJ Griffin is in another galaxy in terms of talent; he’s one of the best shooting prospects in recent years, plus Griffin can do damage with the basketball as a creator, too. However, his primary role this past season was to move without the ball, hit 3-point bombs and help loosen up the defense for Paolo Banchero, Mark Williams, Wendell Moore Jr., Trevor Keels and Roach.