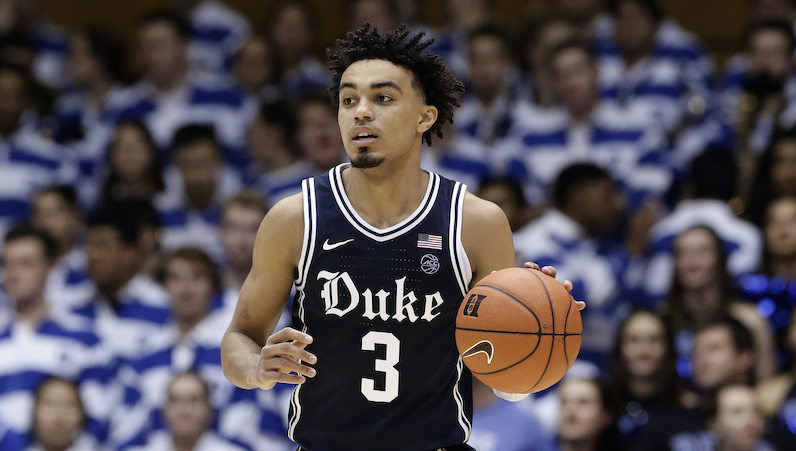 According to a report from Adrian Wojnarowski of ESPN, Duke sophomore point guard Tre Jones will enter the 2020 NBA Draft.

A projected first-round pick in 2020, Jones could’ve left for the NBA following his freshman season in 2019; however, he decided to return to Durham for another season. During the 2019-20 campaign, Jones was named ACC Player of the Year and Defensive Player of the Year.

🐐: “He’s been the heart and soul of our program over the last 2 seasons.” #DukeintheNBA #TheBrotherhood

As a sophomore, Jones averaged 16.2 points, 6.4 assists, 4.2 rebounds and 1.8 steals per game. With a much different shot profile — more volume, more off-dribble jumpers — Jones shot 42.3 percent from the field, and 36.1 percent on his 3-point attempts. Over 40 percent of his 3-pointers this season were unassisted.

Along with Tyrese Haliburton of Iowa State, Jones was one of 18 players in the country this season with 20 percent usage, 30 percent assist rate, 2 percent steal rate and 35 percent shooting on 3-point attempts.

A shift on offense

With Zion Williamson and R.J. Barrett leaving for the NBA, Jones went through a bit of an offensive role change this season. Jones would no longer hang in the corner without the basketball while his lottery-pick teammates went to work.

Opponents aggressively sagged off Jones, especially late in his freshman season, unconcerned with his ability to hit 3-pointers. According to Synergy Sports, Jones posted an effective shooting rate of 66.3 percent on spot-up no-dribble jumpers this season. (This ranks No. 9 in the ACC among players with 30 or more possessions.)

As a shooter, Jones grew far more confident in his pull-up jumper; he frequently looked for transition 3-pointers this season, even with an expanded arc. In the half court, Jones continued to flash his floater/runner game — one positive shooting feature that stood out his freshman season, too.

According to Synergy, Jones finished 145 pick-and-roll possessions this season as a ball handler (38 FG%, 40 eFG%). Here, he flashed some pull-up abilities from the midrange as well.

Jones finished just 34 pick-and-roll possessions as a freshman. He took on a massive increase in volume this season.

Beyond his half-court passing, Jones is an offensive engine in transition, too. One of the best hit-ahead passers in this draft class, Jones plays with wonderful vision and timing; he’s able to throw teammates open. (Haliburton is excellent in this regard, too.)

Smart guards know the importance of pushing tempo; the best guards, however, have the actual ability to execute those tactics.

On the other side: Tre Jones

Jones is a ferocious competitor; he’s also one of the best defenders in country, gifted on and off the basketball. Over his two-year career, Jones recorded 120 steals in 65 games (2,258 minutes) — 2.1 steals per 40 minutes.

In terms of on-ball defensive approach, there are similarities to Chris Paul. Jones is always in a stance, eyes focused on the midsection of his cover. With a low-center of gravity, Jones is able to slide and stay in front of all kinds of twitchy guards. (The lateral movement of Jones, at times, likens to that of tennis star Novak Djokovic patrolling the baseline. Their lateral reflexes are both so damn quick.)

His on-ball excellence is what led to his defensive reputation; however, it’s the off-ball instincts that could really help on the next level, too. Team defense is so important in the NBA. The team that selects Jones gets an assignment-ready defender on Day One.

Beyond the technical aspects, Jones is a passing-lane menace. He spies passes before they develop, and breaks on the ball — tracking it in the air — like a defensive back in football.

Jones also has the ability to tag, track and locate as an off-ball defender — chasing his assignment off screens and pouncing when the opportunity presents itself.

This adds to his defensive upside as well; NBA teams need defenders with boundless energy that are capable of going stride for stride with some of the best movement shooters in the world.

A smaller guard, Jones will need all of these tools as he transition to the NBA. Defensively, what he lacks in size and length, he can compensate for with quick hands and heady decision-making.

It seems less than likely that Jones projects out as a high-usage A-1 offensive creator in the NBA. While his shot is no longer a liability, it’s no exactly a strength, either. There’s room for growth as a pick-and-roll conductor.

Jones, however, makes winning plays; he’s a winning basketball player, one with a good sense of how to push pace and generate ball movement. Jones will be a good transition player on the next level, even though he almost never dunks (outside of warm-ups); guys will love playing with him, as he continuously helps facilitate high-probability scoring opportunities.

Tre’s older brother, Tyus, found a role in the NBA as a low-mistake player who brings a little something to the table on both ends. Last offseason, he signed a three-year $28 million deal with the Memphis Grizzles, using most of their mid-level exception.

With the upstart Grizzlies this season (No. 8 in the Western Conference), Jones has helped run their second unit, while also splitting team with rookie point guard Ja Morant — a franchise cornerstone. (In 79 minutes, lineups with Jones and Morant have a +8 net rating this season.)

In terms of two-way impact, Jones is a floor-raiser. Even if he maxes out as a bench guard, there’s still tremendous value in that. The brother-to-brother comparison may be a little trite, but there’s a role similar to that for Tre on the next level.