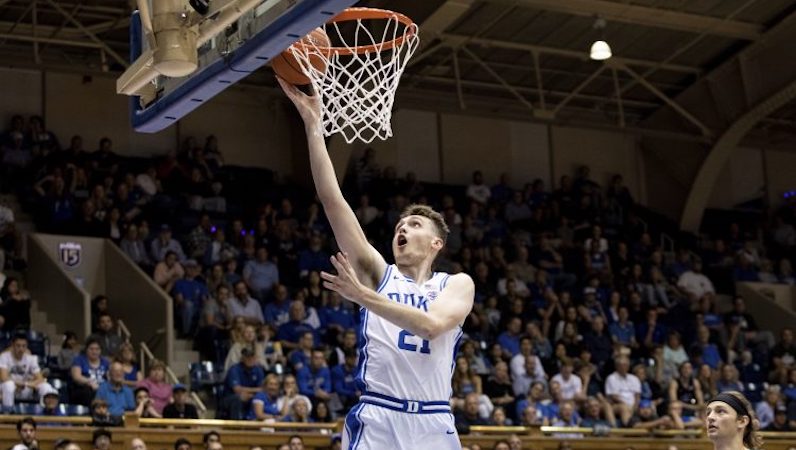 Matthew Hurt will return to Duke for the 2020-21 season. The Blue Devils will part ways with at least three other underclassmen; Tre Jones, Cassius Stanley and Vernon Carey Jr. all declared for the 2020 NBA Draft. Hurt made the announcement on his Instagram page.

Throughout the course of his rookie campaign, Hurt saw his role fluctuate some; the freshman forward played just 16.2 minutes per game over the final nine contests. At times, the Blue Devils opted for more small ball, with Wendell Moore Jr. as the de facto 4, or Justin Robinson at power forward.

However, there’s no questioning Hurt’s offensive skills (58 eFG%). He’s an excellent shooter from multiple levels of the floor. According to Synergy Sports, Hurt posted an effective shooting rate of 69.6 percent on spot-up no-dribble jumpers this season — No. 5 in the ACC.

Hurt also worked on speeding up his shot during this season. He needs more improvement here, though. Currently, Hurt’s release is long and has some side movement. When teams looks to run him off the line, Hurt needs more counters — stronger closeout drives, to the rim, and the improvement of a floater, too. Hurt shot 67 percent at the rim this season with eight dunks.

There’s some post game in his arsenal, too: 60.6 percent shooting on post-ups — 1.17 points per possession — this season, per Synergy. In the absence of Carey, increased post touches for Hurt could be on the horizon.

He’s especially comfortable operating at the elbow in Duke’s horns sets. Get ready to see more of that next season, especially with talented-but-young guards DJ Steward and Jeremy Roach joining the program.

Defensively, Hurt must show scouts a better ability to get in a stance, slide and guard in space. Adding more upper body strength with help with his post defense, too. Conversely, a stronger lower body would also help Hurt on offense — more power to establish post position and a quicker first step on the perimeter.

Duke is set to have a really deep frontcourt next season, led by Hurt. On paper, there’s a solid offensive fit between Hurt and Columbia graduate transfer Patrick Tape — a solid screen-roll and post scorer. Along with Joey Baker (39.4 3P%), who will return for his junior season, Hurt gives the Blue Devils two proven spot-up threats.

Jordan Goldwire started to come on a shooter (35.4 3P%) late in his breakout junior season, too. He punished a couple teams that elected to sag off him on the perimeter. Assuming Wendell Moore Jr. returns for his sophomore season, too, Duke will have multiple rangy guards that offer some off-dribble creation. This could unlock some simple 1-4 pick-and-pop looks for Hurt, too.

Hurt and Moore have major opportunities to be the alphas of a roster that has plenty of incoming future NBA talent set to arrive, too, especially 5-star forward Jalen Johnson. Together, Johnson and Hurt as the team’s 3 and 4, respectively, or 4 and 5 in some small-ball lineups, could be really impactful.

With improved defense and an altered roster, Hurt should see more playing time. There’s a strong chance he works in as an efficient, high-usage frontcourt piece. Hurt has a skill set that works within the framework the modern NBA, assuming he can hang defensively. The 2020-21 season could be his showcase opportunity.