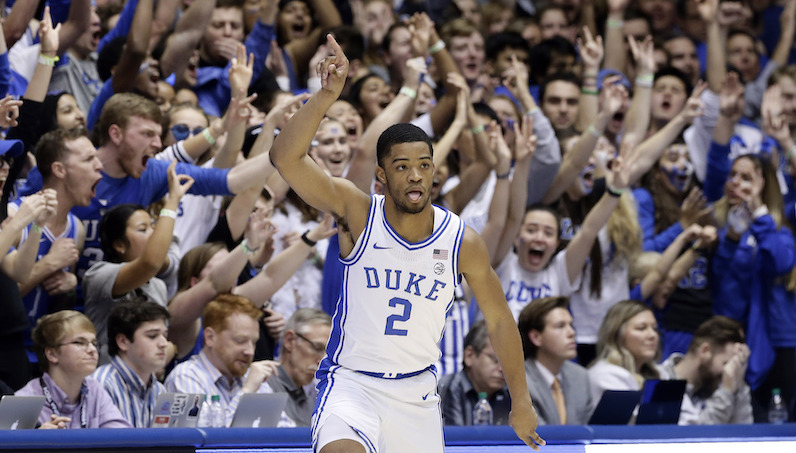 Cassius Stanley of Duke has declared for the 2020 NBA Draft. Stanley becomes the most recent ACC player to make his decision, as more and more college prospects deliberate draft decisions amid concerns with COVID-19.

Stanley, a freshman from California, announced the decision on Twitter.

One of the most explosive players in the country this season, Stanley averaged 12.6 points and 4.9 rebounds per game. Stanley shot 47.4 percent from the floor (53.1 eFG%) and 36 percent from beyond the arc (3 3PA per game).

Stanley, who will turn 21 in August, is older for his class; he’s actually older than his sophomore teammate Tre Jones. In his state, Stanley referenced how age played a factor in his decision-making process. Jones declared for the draft two weeks ago, too.

At this point of his career, Stanley is strictly a finisher; during his freshman season, he dished out only 30 assists (6.6 percent assist rate) in nearly 800 minutes of action. Stanley will need to be able to hit spot-up jumpers on the next level to open up his closeout-attack game.

As of right now, Stanley’s abilities to work a ball screen or attack off the bounce in isolation are limited. He was credited with using only 16 pick-and-roll possessions this season, per Synergy Sports, although he showed flashes.

On isolation drives, Stanley showed the ability to put the ball on the floor, albeit with some issues. Outside of his spin move, Stanley struggles to change directions off his dribble. This causes him to operate mostly in a straight line, or until a turnover occurs.

There are some healthy indicators, though. Stanley — who shoots a clean ball, with tight rotation — posted an effective shooting rate of 60.5 percent on spot-up no-dribble jumpers this season. He also connected on 73.3 percent of his 105 free throw attempts.

Stanley flashed good range (and balance) with his jumper on a few occasions. Later in the year, he showcased the ability to stick a 3-ball off movement, too. (While I mostly buy Stanley’s shot, I’m not sure he has legit movement-shooter skills.)

When it comes to absorbing contact — on both ends of the floor — Stanley has some struggles. Defensively, teams would look to post Stanley or drive bulkier wings right at him. And while Duke would occasionally look to post Stanley out of (lifted) Horns or flex sets, finishing through contact isn’t a strong suit of his. He shot under 53 percent at the rim in the half court, per Synergy.

As a defender, Stanley lost sight of the ball from time to time in help situations, but he’s far from a space cadet. His help instincts are mostly fine. In a pressure-packed denial defense like Duke, though, it’s a bit a surprise that Stanley (who is explosive but not long) averaged just 1 steal per 40 minutes.

There’s no questioning his record-setting leaping abilities (he has rocket boosters for legs); however, added upper body strength would go a long way.

Off the top of my head, I’d rank Stanley as one of the top 45-55 prospects in the draft. His athleticism may allow him to jump another tier or two, though.