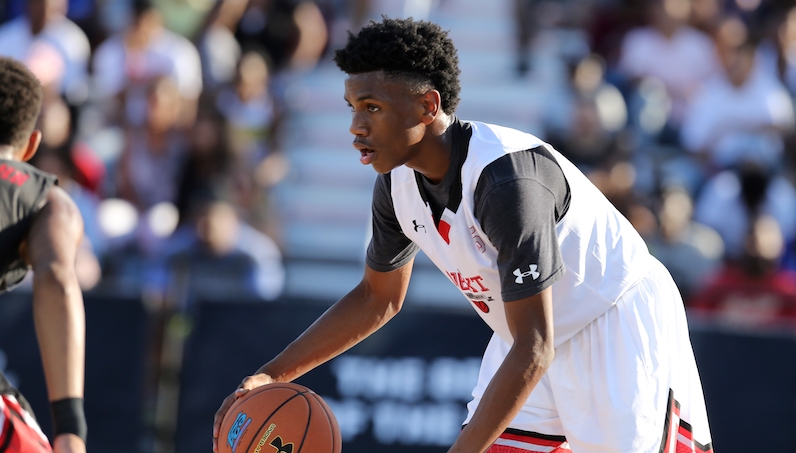 Team Pursuit''s Jeremy Roach #5 in action against Team Select in the Under Armour Next 24 game on Saturday, August 20, 2016 in Brooklyn, NY. (AP Photo/Gregory Payan)

After putting the finishing touches on its 2019 recruiting class recently, Duke has turned the page over to its 2020 cycle. On Wednesday evening, Duke landed its first 2020 commitment: 5-star point guard Jeremy Roach.

The 6-foot-2 Roach is ranked as the No. 15 overall prospect by 247 Sports and the No. 2 point guard. If all goes according to plan, this is the guy that will take the point guard job from Tyus Jones after next season.

Duke's first pledge of the 2020 class is Jeremy Roach. He ranks No. 15 overall in the @247Sports Composite Rankings & as the No. 2 point guard. Here's more on the pledge: pic.twitter.com/rRs7JLAADp

Roach plays his prep basketball for Paul VI Catholic in Fairfax (Va.); he picked Duke over Villanova and Kentucky. According to Evan Daniels, North Carolina was in the mix, too, but to a lesser extent.

The commitment of Roach could also shed a little bit of light on the recent decision of 4-star 2019 guard Boogie Ellis. Last week, Ellis asked for and received a release of his LOI to Duke. This is speculation, but with Jones holding doing the point guard spot this season, and the possibility of Roach arriving in Durham in 2020, perhaps Ellis decided to seek another situation.