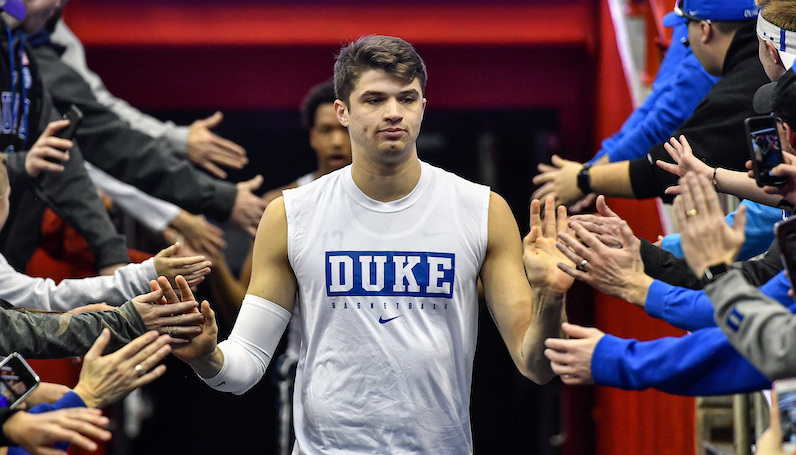 Roster turnover is a major function of college basketball. Turnover will likely be high once again for Duke; however, the Blue Devils are still set to return a couple veterans. On Tuesday night, wing Joey Baker announced that he plans to return for his junior season with the Blue Devils.

Not the ending we wanted but an incredible year and journey with my brothers. The best is yet to come.. year 3 coming soon Durham. Stay safe everyone 💙🤞🏼 #together pic.twitter.com/HJ1a5JXA5g

After an abbreviated freshman season, Baker became a much larger part of the rotation during his sophomore year in 2019-20, though his role did fluctuate. Baker appeared in 28 games — making three starts and averaging 12.1 minutes per contest.

Advertised as a shooter coming out of the prep ranks in 2018, Baker delivered on those claims this season. Over 58 percent of his field goal attempts were of the 3-point variety: 28-of-71 3PA (39.8 3P%). Baker shot 91.7 percent from the free throw line (12 FTA) as well and averaged five points per game.

According to Synergy Sports, Baker posted an effective shooting rate of 58.8 percent on catch-and-shoot attempts, which is a healthy number.

Late in the season, Baker’s role seemed to drop some — as did his shooting efficiency. However, this is a strong piece to return for Duke. Baker proved he’s an ACC-caliber rotation player, at the least; with another offseason to improve, the Blue Devils could have one of the better spot-up weapons in the ACC on their roster next season.

At this point, Baker is a bit of a one-trick pony; only one of Baker’s 28 3-pointers this season came unassisted. But he’s getting better and there’s already one important skill to build around: range shooting.

Jones and VCJ project as first round picks; Stanley’s stock is a little less certain, but he’s got upside and plenty of fans in league front offices. Hurt and WMJ remain big swing pieces, though.

Duke will add the nation’s No. 2 recruiting class to the mix, which features six players — all ranked in the top 50 of the 2020 class. The class is headlined by three 5-star recruits: forward Jalen Johnson and guards DJ Steward and Jeremy Roach.

However, the Blue Devils will still return some solid pieces to the lineup. Baker will be joined by Jordan Goldwire — a rising senior who will provide leadership and strong defense to the backcourt. Goldwire made a serious jump as a player this season, too. Alex O’Connell could also return on the wing as well.