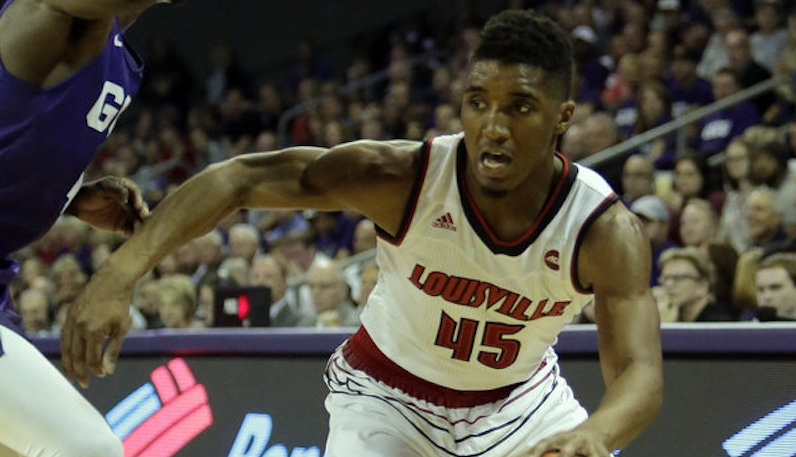 It’s late April, and as usual, the NBA Playoffs are once again delivering; seven of the eight first round series are still intact. This is sports drama at its finest. Amid the hysterics of postseason basketball, several rookies — former ACC players to exact — are having an incredible impact, too: Jayson Tatum and Donovan Mitchell.

Last June, the ACC set a record with 10 first round picks in the NBA Draft; five of the first 14 picks — the lottery selections — hailed from the ACC, including Tatum (No. 3) and Mitchell (No. 13). It’s rare for rookie lottery picks to have a high impact in the playoffs. Think about it: teams drafting at the top of the draft frequently aren’t necessarily playoff-bound the following year. However, flick on your television screens at night to postseason hoops, and you’re likely to catch both of those dudes lighting it up.

(Of note: The reasons Boston and Utah, both playoff teams in 2017, had lottery picks is because of trades they constructed at or prior to the draft — unrelated to 2016-17 record.)

This didn’t start in the playoffs, either; Tatum and Mitchell have stood out since the season started, way back in October. Both guys are locks to be named first team All-Rookie, and will likely finish 2-3 in Rookie of the Year voting. (The top pick of 2016, Ben Simmons, is the frontrunner for that award.)

All of this got me thinking: With hindsight being 20/20, if one were to re-pick the 2017 NBA Draft, would Donovan Mitchell and Jayson Tatum go 1-2 in the draft? I believe the answer to this hypothetical to be a definitive “yes.”

Jayson Tatum: The future is now

The former Duke Blue Devils has been outrageously good all season for the Celtics. Tatum just turned 20-years-old last month, but he plays with an ease that make him look like a veteran. As a rookie, Tatum shot 48 percent on catch-and-shoot three-pointers, and an absurd 54 percent on corner threes. Overall, Tatum finished the season No. 8 in the NBA in three-point percentage: 43.4 percent, tops amongst rookies.

That three-pointer has become weaponized in a way it never quite was at Duke. Tatum still takes his fair share of midrange attempts, but in the motion offense of Brad Stevens, he’s focused more on the two money areas of the floor: beyond the arc and at the rim. According to Cleaning The Glass, around 65 percent of Tatum’s field goal attempts this season have been three-pointers or inside the restricted area.

On offense, Tatum is tremendous at beating closeouts. He spaces along the weak-side of the floor, and when the ball gets swung in his direction, he snaps into actions — and puts defenders in a precarious position: closeout hard or let this guy shoot a three, which he makes 45 percent of the time.

What’s been fun to watch recently with Tatum is his increased playmaking duties. With Kyrie Irving injured, Boston is awfully thin along the perimeter, in terms of offensive skill. Stevens has relied on Tatum to shoulder some of this load — along with another former Louisville guard, Terry Rozier.

He’s had his issues, too; Tatum’s turnovers are up slightly in the playoffs — 2.7 per 100 possessions — in part because he keeps that dribble high. So, too, are his assists, though. And he has moments like this that make you wonder: how good will he eventually become?

Jayson Tatum led all rookies from the 2017 draft class in win shares this season, per Basketball Reference: 7.1. The next closest player, amazingly, is Atlanta’s John Collins (5.4), formerly of Wake Forest, and then, of course Donovan Mitchell (5.2). Ben Simmons slapped up an insane 9.2 wins season, which is historic. (More on all of this in a second.)

According to Basketball Reference, only 12 guys from the 2017 draft (60 selections) finished with two or more win shares. Of that dozen, four came from the ACC — Tatum, Collins, Mitchell and Luke Kennard. (Collins, Mitchell and Kennard were a part of ACCSports.com’s All-Analytics team in 2016-17.)

Back to Tatum, though, because his win shares total is significant. He joins Dwight Howard as the only other 19-year-old in NBA history to put together a season of seven-plus wins.

I could continue, but you get the point: Tatum is in rare company.

Donovan Mitchell: So, this guys is good, huh?

(Before we start: Hornets and Nuggest fans, divert your attention; go outside; get a breath of fresh air, and keep reminding yourself: “There’s always next year.”)

As good as Tatum has been, no other rookie has quite taken the NBA by storm, like Donovan Mitchell. The rookie from Louisville is a high-usage assassin for the wildly fun Utah Jazz. Mitchell averaged over 20 points per game this season, and used over 29 percent of Utah’s possessions while on the floor.

Along with center Rudy Gobert, Mitchell helped ignite a surge over the second half of the season, which may alter the trajectory of Utah’s franchise for the next decade.

In these playoffs, Mitchell has taken all of this to a whole other level, too. The 6-foot-3 combo guard is averaging 27.5 points, 8.5 rebounds and getting up over seven three-point attempts per game. His dynamism in the pick-and-roll and on drives to the basket is undeniable; in the first four games of the series with Oklahoma City, he’s carved up the Thunder.

Hypothetically: If I controlled the No. 1 pick, in the scenario of re-picking the 2017 draft, I would go with Jayson Tatum over Donovan Mitchell — barely. (I’d also agonize over it, and likely lose sleep and my hair.)

Tatum is nearly two full years younger than Mitchell, who is still only just 21. It will be amazing to see where Tatum is, as a player, in 24 more months. Secondly, and more importantly, Tatum looks like the future of basketball; he’s what every team covets: a switchy wing that can shoot, handle and defend multiple positions.

That said, Mitchell possesses a near 7-foot wingspan, too, like Tatum; he’s also a rugged defender than can credibly handle both point guards and shooting guards. If you prefer him as your top choice, I have no issues, either.

It’s also worth pointing out: both of these guys were high-caliber recruits coming out of high school. Tatum, a member of Duke’s stacked 2016 class, was the No. 1 small forward in America; Mitchell, on the other hand, was a top-30 prospect, too.

Keep that in mind as another batch of players depart from the ACC for the NBA, and another group of star-studded recruits enter the league as freshmen.