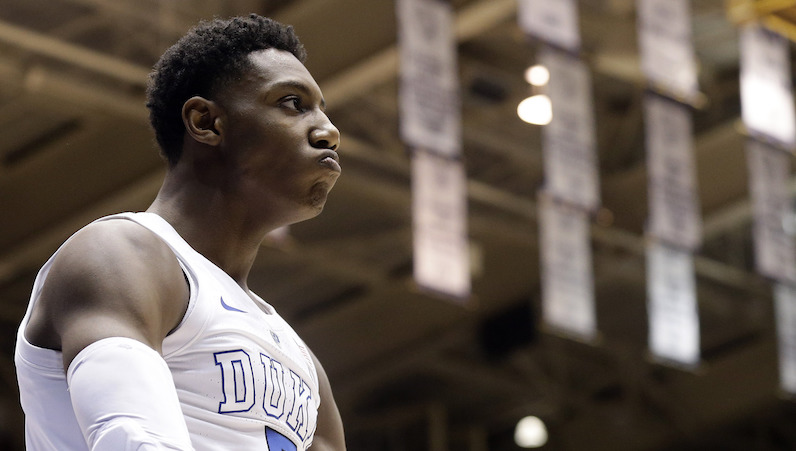 In the bowels of Cameron Indoor Stadium, there’s a back hallway on the ground level that runs parallel to the basketball court. This hallway is unseen to television cameras; it’s essentially tucked behind the Cameron Crazies, and it connects the front entrance of the stadium to the Duke locker room and the Bill Brill media room.

Along that hallway, you will breeze past several offices and auxiliary rooms that house media overflow or some form of in-house Duke sports information. In one of those offices, though, something always catches my eyes through a window as I head to the press room: a life-sized cardboard cutout of RJ Barrett in a black Duke uniform.

That cutout has been there before Barrett even arrived as a student at Duke; it was there last season, during Marvin Bagley and Wendell Carter’s one-year reign. My guess would be that it’s likely a leftover treasure from some recruiting visit that Barrett took to Durham. But the cutout is forward-facing and unmissable — Barrett’s eye contract frozen in time, peering back out into the hallway.

It’s a reminder: There was a lot of hype around his arrival. That tends to be the case for the No. 1 recruit in the country. However, is it possible for RJ Barrett, Canadian basketball royalty, a left-handed hoops prodigy, and a likely top-five NBA Draft pick to be underrated? Perhaps it’s true: When Zion Williamson is around, nothing is impossible.

There’s nothing like Zion Williamson — a near-300-pound human highlight factory of powerfully efficient basketball. He can do everything well on the basketball court — defend, rebound, pass and handle the ball. His ability to finish at the rim is elite. You have to watch this guy play, and also look at his numbers, to fully appreciate the Zion Experience. He’s one of the best NBA prospects of the last two decades. It’s a joy, personally, to watch him play and track his ridiculous production.

This exchange from Zion Williamson: my word. Grab-and-go rebound, ditches Jerome with an in-and-out crossover at top speed, to the finish over a 7-footer with his off hand. Wow. pic.twitter.com/OjZyn4r64C

With that, he’s drawn a lot of attention. Like, a lot of attention. (I know I’ve written plenty on him so far this season, and will continue to do so.) ESPN has wall-to-wall coverage; type his name in for a Google search and you’ll find new hits each and every day. He brings buzz and attention to the sport on a daily, nonstop basis.

Williamson is also team-player; he plays full tilt at all times. Once you factor in the social media equity he built before even arriving in Durham, and it’s no wonder that it feels, at times, like he’s involuntarily eclipsed college hoops. (He’s the Super Blood Wolf Moon of college basketball!)

But if you’re seriously underrating RJ Barrett, then you aren’t paying enough attention. Let’s catch you up to speed.

Duke asks RJ Barrett to do a lot. The rookie southpaw leads the ACC in scoring (23.8 points per game) and usage rate, per Sports Reference — 33.1 percent. (Pitt’s Xavier Johnson is second: 30.1 percent). Barrett and Johnson are currently the ACC’s only two players with 30+ percent usage rate and 20+ percent assist rate. Going back to the 2009-10 season, only eight ACC players have hit those benchmarks over a full season.

(Note: Barrett and Johnson are the only two freshmen in major conferences with usage rates at or above 30 percent.)

He’s playing huge minutes, too. In ACC competition, Barrett has been on the floor for nearly 92 percent of Duke’s minutes (38 per game). Over the last three games — Florida State, Syracuse and Virginia — Barrett has gone the distance in every contest, including 45 minutes against Syracuse.

With Tre Jones on the mend, Barrett has been asked to handle even more of the playmaking duties — along with Williamson. The ball won’t ping around the perimeter in Duke’s iso-centric offense with Barrett at the controls. At times, he plays with tunnel vision and can also miss on some really obvious passes.

This has been a legitimately good RJ game. Maybe his best game of the year that I've seen. But c'mon man. pic.twitter.com/jqWjJZwc80

However, he will take care of the ball and hunt high-percentage looks. On the season, Barrett has a sub-13 percent turnover rate, which has dropped to 10.7 percent in five ACC games (2.3 turnovers per 40 minutes), according to KenPom. He turned the ball over just once against Syracuse (30 percent usage rate in 45 minutes). And in the win over Virginia, he again turned the ball over one time (34 percent usage in 40 minutes).

Thread the needle or go over the top

Barrett can also play with incredible vision at times, too. Watch him pull the ball out here and operate with patience against a double team from De’Andre Hunter — an excellent defensive wing prospect — and Jack Salt. As Javin DeLaurier rolls, it’s 4-on-3 for Duke on the back side. Duke’s created an advantage. Barrett quickly hits White in his usual spot — the corner. Jerome closes out hard, which gives White a runway.

This hits on something I wrote about before the season started: At 6-foot-7 and with handles, Barrett can pound the ball, draw attention and see over the defense. This read at Wake Forest is excellent. Barrett sees Jaylen Hoard bump DeLaurier on the roll, and looks him off with his eyes — just like that hallway back in Durham. With Olivier Sarr in no-man’s land coverage (per the usual), there’s a channel for Barrett to play the ball in.

When he packages all of his skills together — the vision, the ability to slash and drew help defenders — in a 10-second burst, it’s pretty wild to watch. Look at how much ground Barrett covers; he gets the ball from one side of the floor to the other, then recollects it, and attacks.

This is something that Cole Zwicker detailed over at The Stepien before the season started: RJ Barrett has elite slashing skills. Barrett is long and quick, which helps, but he also has a bag of tricks that help create separation — angled strides, a mixture of hesitation and shoulder fakes and the occasional arm jab.

(Note: If you don’t follow/read The Stepien, then I strongly recommend you start.)

Barrett isn’t Zion Williamson, but when he gets an angle going to his dominant left hand, it’s a done deal — or at least it feels like that at times. (Barrett: 1.2 points per possession in transition this season, per Synergy.)

That said, Barrett has all kinds of slithering maneuvers to unleash and create separation in the final third of the offensive floor.

His stop-and-go style of attacking off the bounce reminds me of All-Star guard DeMar DeRozan, who Mike Krzyzewski coached for Team USA and spent the bulk of his NBA career in Toronto — playing not too far from Barrett’s hometown of Mississauga

Virginia threw a variety of good defenders at Barrett — Dre Hunter, Braxton Key and Ty Jerome. Barrett still got to where he wanted to go, though. He was just 1-of-6 on 3-point attempts; however, Barrett went 10-of-13 on attempts from inside of seven feet (77 FG%). Eight of 10 field goals were unassisted.

Let’s not forget: Virginia ranks No. 2 nationally in adjusted defensive efficiency (42.4 eFG%, too). This team wants to make life around the basket a challenge.

In the 2018-19 season, that’s no different, either. Currently, opponents are shooting just 49.4 percent — 1.02 points per possession (91st percentile nationally) — on non-post-up attempts at the hoop, per Synergy.

I hadn’t actually broken it down, but yeah 1-6 from 3 hurts from a shooting perspective

It was a good game, just something he’s done many times this season, speaks to his shooting ability pic.twitter.com/EIQlwSPuN7

Against one of the toughest interior man-to-man defenses in the country, RJ Barrett still got to the rim and finished with efficiency.

Never in a rush

This is may be my favorite bucket of his from Saturday night. Barrett comes off a handoff with Cam Reddish and has Ty Jerome one-on-one in the middle of the floor. It’s go time for this multi-step procedure.

Barrett hits Jerome with a right-handed in-and-out dribble and gets into the paint. He quickly sticks a two-footed jump stop, which draws Jack Salt — King of Verticality — in the air. Barrett lets him float by and completes the play with a simple layup.

The finish may look easy, but to arrive at that place is basketball’s version of solving a Rubik’s Cube. Look Ma, No (Left) Hands.

Barrett’s game is predicated on his ability to get to the rim, which means he has to play through a lot of contact. So far, Barrett has shown that he’s capable of getting to the line. However, there’s room for growth here, too; he can get to the line even more.

According to KenPom, draws 5.3 fouls per 40 minutes and attempts 7.1 free throws per 40 minutes. Those are both solid numbers, but with his abilities, he can increase those rates. That, in turn, could help his true shooting number, which sits at 53.2 percent.

The sample is small, but since the start of ACC play, Barrett has shot a little bit better from the line, too. On the season, Barrett is a 68-percent free throw shooter; over the last five games, though, that’s jumped to 74.2 percent (23-of-31 FTA).

At times this season, Barrett has hit some bumps finishing through contact. In my honest opinion, though, he’s been better recently.

He’s no longer short-arming finishes; instead Barrett plays straight up and sticks with the play. Even though he misses this initial take, he goes with power and still manages to finish it out.

On this transition possession (what a steal by Cam Reddish, by the way), Barrett does a well things well. He doesn’t plow into Kihei Clark, which would be a foul and a turnover — two things he avoids. (1.1 fouls committed per 40 minutes in ACC play.)

So, answer the question…

I don’t think RJ Barrett is underrated. However, I certainly don’t think he’s overrated, either. The dude should be properly rated: An awesome basketball player who loves to play basketball and win games.

He plays huge minutes and puts up monster box score numbers. While Barrett’s shooting numbers may leave something to be desired, that’s the cost of doing business. He has a monster usage rate and some gaudy shooting performances, but that’s what Duke asks him to do.

Creating your own shot (46.7 eFG% on off-dribble jumpers) is hard. Leading an offense that lacks range shooting is also hard.

There’s room for growth. Barrett’s pick-and-roll game can improve, and his catch-and-shoot looks off of screens need more fluidity. But this is a really good player and there’s plenty of reasons to be bullish on him as a draft prospect.

If you underrate or overrate Barrett, it’s your own darn felt.

After UVA win, Duke lands at No. 1 in this week’s ACC Power Rankings