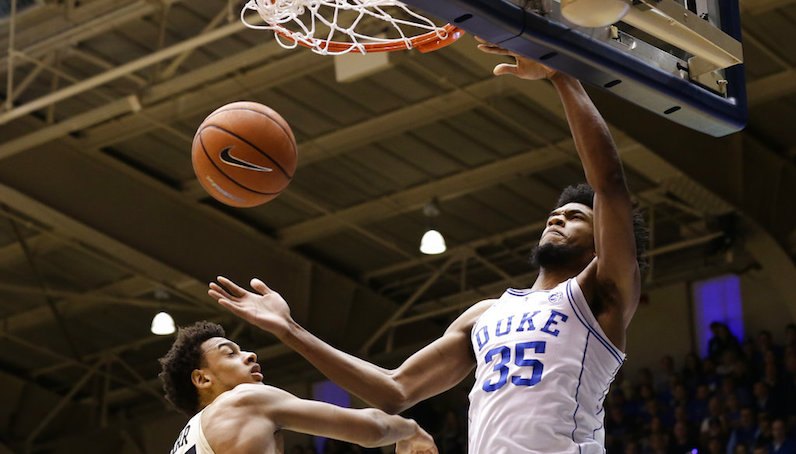 There are countless ways to dissect this week’s Duke-North Carolina matchup — both on and off the floor. But let’s take a second to look at something that may appear to be a perceived advantage for the Blue Devils: offensive rebounding.

I know, I know — a provocative topic. But with Marvin Bagley and Wendell Carter, Duke has a frontcourt unlike any other in college basketball — two lottery picks at the power positions. Those two dominate action above the rim for the nation’s second most efficient offense, per KenPom. Part of that equation: Duke ranks No. 1 in the nation in offensive rebounding rate: 42.3 percent.

UNC, on the other hand, prefers to plays small this season; in fact, over the last five games, 54 percent of the team’s power forward minutes have gone to Cameron Johnson and Theo Pinson. The popular notion may be: “Well, Duke and its two lottery picks should dominate on the glass. Carolina is in trouble.”

However, North Carolina has allowed opponents to rebound just 24.3 percent of their own misses this season — which ranks 26th nationally. In conference play, that’s jumped slightly to 26.8 percent; but it’s still good for third in the league, per KenPom.

Not only does Duke lead the nation in offensive rebounding — it goes beyond that. Nearly 10 percent of Duke’s possessions this season have been put-backs after an offensive rebound, per Synergy Sports. On those attempts, Duke — led by Bagley and Carter — is shooting 66.5 percent and scoring 1.28 points per possession, which ranks 13th nationally.

On an individual level, Bagley and Carter have combined to score 176 points this season on put-backs, according to Synergy.

Amongst players with at least 50 put-back possessions this season: Bagley and Carter rank fifth and sixth, respectively, in the nation in efficiency on put-back attempts. It may sound weird to read, but Duke’s offense hits a ridiculous level of efficiency after a missed shot.

Due to a lack of experienced, long-armed frontcourt players, much has been made of this North Carolina roster not looking like the prototypical UNC lineup.

Tyler Zeller and John Henson (reunited in Milwaukee!) no longer play for Roy Williams — same for Kennedy Meeks and Isaiah Hicks, but the Tar Heels have fought hard to remain solid in the rebound department. Only 5.2 percent of opponent possessions against UNC have been put-backs after an offensive rebound, per Synergy. That’s the second lowest rate in the ACC.

According to Synergy, teams are shooting 46 percent and scoring 0.92 points per possession on put-backs against UNC; within the ACC, only Georgia Tech (0.81) and Virginia (0.91) are stingier.

Luke Maye has increased his production across the board this season. His offense gets the headlines, for obvious reasons, but Maye’s defensive rebound rate has jumped from 17.4 percent in 2016-17 to 24.1 percent in 2017-18, which ranks 67th in the nation.

Theo Pinson does a little bit of everything, including help on the glass. Pinson, according to KenPom, has a defensive rebound rate of 17.3 percent — outstanding for a 6-foot-6 wing.

Freshmen Sterling Manley and Garrison Brooks have found ways to contribute significantly here, too. Manley has a defensive rebound rate of 23.1 percent; Brooks hovers a little above 13 percent.

Both or one of these two big guys could play a major role Thursday night in trying to keep Duke’s dynamic rookie duo — Marvin Bagley and Wendell Carter — off the glass and away from high-percentage looks.

Behind Jordan Tucker’s departure from Duke