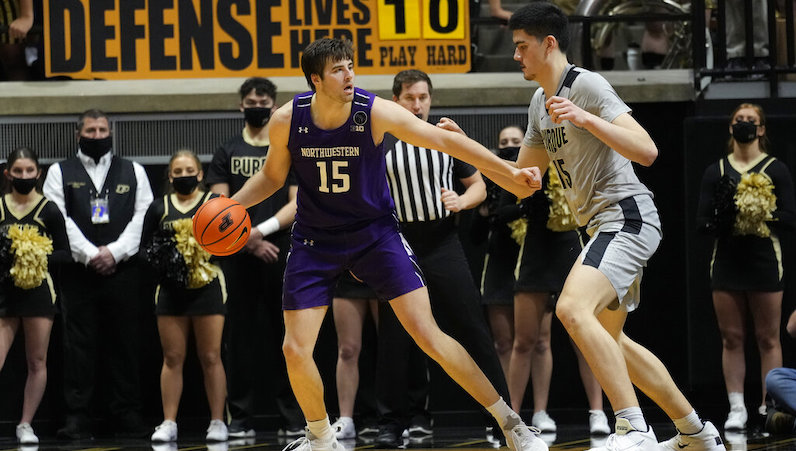 Ryan Young had plenty of suitors this offseason, including several ACC programs; however the veteran Northwestern center committed late last week to Duke. Young joins Harvard transfer Kale Catchings as the second transfer addition this offseason for the Blue Devils.

The 6-foot-10, 245-pound Young spent the last three seasons playing for Chris Collins at Northwestern. Young predominately came off the bench while a Wildcat, while appearing in 86 games (37 starts). He averaged under 18 minutes per game as a sophomore and junior, combined. This type of workload fits within the confines of Duke’s designed structure and frontcourt rotation.

As Lively and Filipowski adjust to the college game, Young gives Duke a big man that can screen-and-dive from Day 1. That’s important to pair with junior point guard Jeremy Roach and freshman wing Dariq Whitehead, who will need plenty of pick-and-roll partners. It won’t be easy to replace the rim gravity of Paolo Banchero and Mark Williams (no duh), but Young can be a target, at the least.

Here’s Northwestern flowing from 21/Pistol action into an immediate ball screen with Young. As Wisconsin’s defense hedges on the ball screen, Young dives to the paint, catches in space and gets to the other side of the rim for a bucket.

Does this look familiar? Here’s Duke running the exact same action: guard-to-guard exchange into a ball screen vs. Virginia’s Pack Line hedge. Roach scans the floor and find Williams for a dunk.

Now, Young recorded only two dunks this season. For his career at Northwestern, Young had just six dunks. Unsurprisingly, this figure pales in comparison to Williams (78.1 FG% at the rim), who led Division I Basketball with 96 dunks this season. In fact, Williams had multiple games this year with 5+ dunks. One of those games was a Second Round win over Michigan State in the NCAA Tournament. Here’s Williams slipping to the rim on an after-timeout Elevator Doors play drawn up for AJ Griffin.

Clearly, Young is a below-the-rim center; however, the veteran center can still score in the paint. It’s also a skill to be able to catch in space on the roll, one dribble, then finish. Young shot 63.5 percent at the rim this season, per Bart Torvik’s data. That’s perfectly in line with his career finishing percentage at the basket: 233-of-366 on attempts at the rim (63.7 FG%) over the last three seasons.

According to Synergy Sports, Young shot 78.6 percent on rolls or slips to the basket this season. (Admittedly, the sample size is small, though: 14 FGA.)

Another notable component of Young’s game is his passing. During his time in Evanston, Young played in Northwestern’s system, which features a good deal of high-post activity. Under Collins, the Wildcats run a lot of Chin and Princeton point series sets. Often, these looks include a post player — at the elbow or in the middle of the floor — working as a passer or handoff hub.

From the 2020-21 season, at Purdue: Young catches the entry pass above the arc, reads the weak-side split action, then launches into pick-and-roll with a little pass-and-chase action.

In recent years under Mike Krzyzewski, Duke ran some action through the elbow, including this past season with Banchero.

The Blue Devils also used the elbow as a location to launch 45 (power forward + center) pick-and-roll action with Banchero and Williams in the 2021-22 season.

This was an effective tactic; however, it often resulted in simply asking Paolo to read the floor and go make a play.

Back in the 2018-19 season, Duke also used that location to launch 45 pick-and-roll action with Zion Williamson. To the surprise of no one, Zion was very good at this type of maneuver.

It goes without saying, but guys like Banchero and Zion are incredibly special; Duke obviously isn’t going to use Young like this next season.

However, Young scored 0.89 points per post-up possession (46.1 FG%) this season. For his career, he dished out 3.6 assists per 100 possessions, too. He can help as a facilitator in these areas. If Jon Scheyer wants to invert the offense — and reduce some of the playmaking load on Roach, Whitehead and Jaylen Blakes — Young can help.

In the recent past, Duke also used a big man at the elbow as a passing hub; it isn’t a base package, but it was part of the mix.

There’s one set out of Horns that Duke runs with some frequency: the point guard brings the ball up and enters it to the 5 at the elbow. While that happens, the wing on that side of the floor (strong-side corner) cuts backdoor). The 5 can look for the cutter. Here’s Vernon Carey Jr. finding Joey Baker for a layup.

However, if that initial cutter isn’t there, the action — with the corner cleared — flows into an empty-side handoff action with the 5 and the 1. From the 2020-21 season opener vs. Coppin State: Roach hits Jaemyn Brakefield at the elbow, Baker cuts through, Roach gets the ball back from the Brakefield (who pops out) and drives rim. Jalen Johnson cleans up the miss with a put-back dunk.

Here’s that same look. This time, though, as Cassius Stanley clears the corner, and Tre Jones and Javin DeLaurier engage in the handoff, Wake Forest’s defense reacts and sends two to the ball. This opens DeLaurier up on the rim run.

If the handoff back to the 1 isn’t the read, then the Blue Devils flow into another handoff exchange between the two post players. In this case, that Johnson and Hurt, which results in a Johnson layup vs. Georgia Tech.

You can see the progression of the set.

Here’s more of the same. Once more, Banchero shows off his ridiculous skill set — super handle and court mapping from a 6-foot-10, 250-pound bulldozer — and finds Trevor Keels for a 3.

This is one of ways Duke could feature Young — by leveraging his size and passing skills. Throw it to him at the elbow and see if he can pick out cutters or launch handoff actions. This could be a way for Duke to also free up freshman sniper Jaden Schutt as an off-ball mover, playing off the high-post hub.

Another set Duke likes to run out of Horns involves another handoff — between the 5 and 4. On this possession, Williams receives the entry pass at the elbow from Wendell Moore Jr. Instead of clearing the corner and handing it back to the 1, Moore clears to the weak side and Banchero runs over to grab a handoff from Williams. This launches more 45 pick-and-roll. As Williams dives, Isaiah Mucius slides over to tag, Griffin shakes up from the corner and drills a 3.

The point guard can trigger this action by coming to the strong side as well. On this possession vs. Boston College, Hurt takes the handoff from VCJ and lines up a 3-ball.

One more for good measure: Williams and Roach fake the handoff, which quickly shifts to an exchange between Williams and Banchero. With Marcus Bingham switched out and Gabe Brown showing help at the elbow, Banchero lights things up with his go-to downhill move: drive left, spin back right.

Some of this will depend on how Scheyer wants to scheme his offense. During the 2021-22 season, Hubert Davis altered the offensive repertoire a great deal from Roy Williams, his predecessor. Will Scheyer expand the playbook or keep the calls the same? Either way, Young is a solid piece to help gin up some offense.