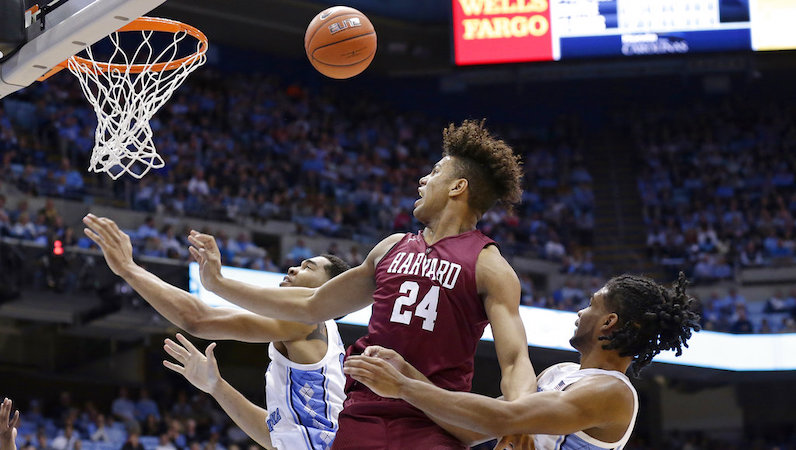 Kale Catchings is now a Blue Devil. The graduate transfer from Harvard will head to Duke.

With roster room and scholarships to utilize, first-year head coach Jon Scheyer adds Catchings, a veteran presence, to his incoming 2022 recruiting class, which ranks No. 1 nationally.

“I chose Duke because it’s the opportunity of a lifetime. I look forward to bringing my experience to the storied program as we strive to hang another banner.”

The 6-foot-6, 220-pound forward spent the last four years with Harvard, playing for former Duke play and assistant coach Tommy Amaker. During his time with the Crimson, Catchings appeared in 44 games, making 30 starts. Of course, as a member of an Ivy League program, there was no basketball for Catchings in the 2020-21 season, due to the COVID-19 pandemic.

However, when Catchings returned to the floor this season, he played the best basketball of his career. Catchings averaged 9.1 points, 4.0 rebounds and 1.0 steals per game. He also shot 36.5 percent from downtown (3.1 3PA per game), with nearly 48 percent of his total field goal this season coming from beyond the arc.

Catchings also shot 66.1 percent at the rim this year, including 13 dunks.

Over the last three seasons, Duke has now brought in two Ivy League graduate transfers. First, it was Patrick Tape from Columbia, ahead of the 2020-21 season. Now, it’s Catchings.

With Bates Jones finishing up his eligibility this season, after his arrival via Davidson, Catchings provides frontcourt depth and shooting. That’s an easy fit for this roster.