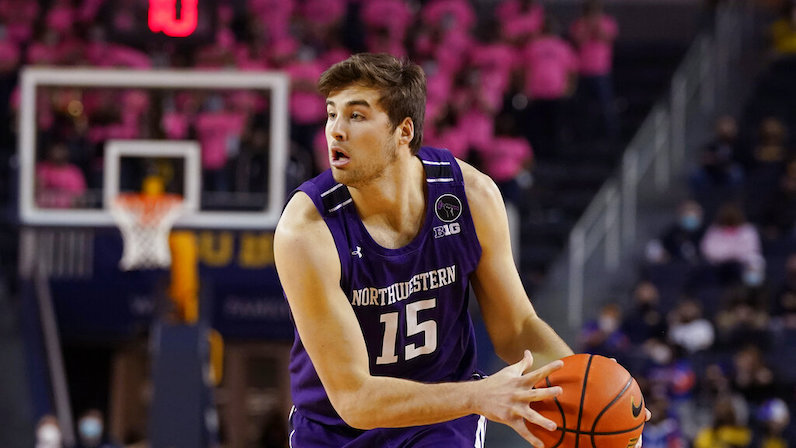 Ryan Young, a transfer from Northwestern, is one of the more skilled big men in the portal. His presence in the portal has attracted plenty of interest, including several ACC teams.

Northwestern transfer Ryan Young tells me that he plans to visit the following schools:

The 6-foot-10, 245-pound Young spent the last three seasons playing for Chris Collins at Northwestern. Young predominately came off the bench while a Wildcat; he averaged under 18 minutes per game as a sophomore and junior, combined. However, Young played in a lot of games (86 games, 37 starts), much of which came against Big 10 competition.

The Appeal For Georgia Tech

During his time at Northwestern, Young played in an offensive system that featured a lot of high-post activity. Under Collins, the Wildcats run a lot of Chin and Princeton point series sets. Often, these looks feature a post player working as a passer or handoff hub in the middle of the floor.

From the 2020-21 season, at Purdue: Young (No. 15) catches the entry pass above the arc, reads the weak-side split action, then launches into pick-and-roll with a little pass-and-chase action.

With that in mind, it’s no surprise that a program like Georgia Tech would be interested in Young. Not only is he a productive rebounder and interior finisher, but Young can also facilitate from the high-post. The Yellow Jackets, under Josh Pastner, run point series, Princeton and Chin sets, too.

Here’s Moses Wright operating at the elbow from a Chin set in the 2020-21 season. After Jose Alvarado clears, Wright and Michael Devoe run empty-corner pick-and-roll, which gets Louisville in rotation and results in a bucket for Jordan Usher.

Young has a career assist rate of 13.0 percent. Back in the 2020-21 season, Young finished with an assist rate of 14.7 percent, dishing out 4.3 assists per 100 possessions, according to Sports Reference.

The transfer portal intrigues for many different reasons. Coaches are able to add talent or round-out rosters with veteran transfers. There’s something to be said, though, about finding players that — before they arrive on campus — have an understanding of certain offensive or defensive concepts.

Boston College and Earl Grant will also run a fair amount of action through the high-post, too. This menu of plays includes 5-out (Delay) sets, which turn into empty-side handoff actions. At the end of this play, Quinten Post and Brevin Galloway flow from an empty-side handoff to snug pick-and-roll. Post has a good look at the rim, but Isaiah Mucius of Wake Forest makes a nice rotation and draws the charge.

The Miami Hurricanes greatly exceeded expectations this season. One of the keys behind Miami’s Top 25 offense was the team’s adaptation of 5-out.

These 5-out looks spread the floor and allowed the Hurricanes to attack a variety of pick-and-roll coverages with handoff actions.

Now, it certainly helps to have the right personnel to make this system work. Isaiah Wong, Kam McGusty and Charlie Moore were an excellent backcourt.

Young doesn’t offer the same stretch as someone like Waardenburg. He’s connected on only 5-of-29 3-point attempts (17.2 3P%) in his career; however, Young still can handle the ball, make reads and slip in screen-roll action when needed.