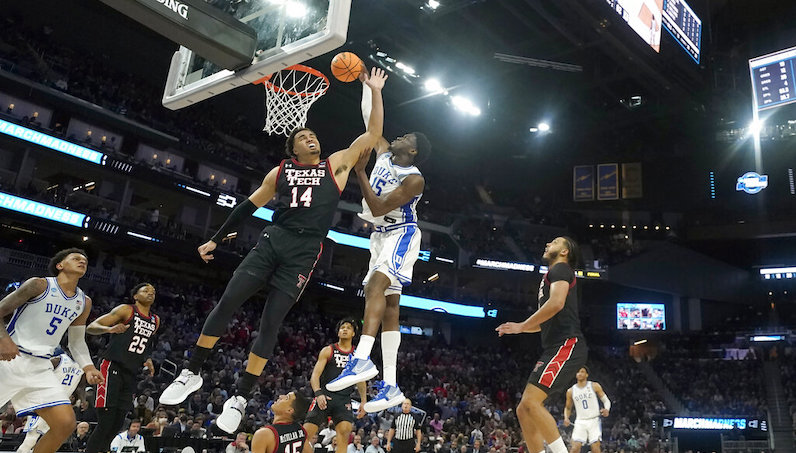 Duke center Mark Williams, top right, dunks against Texas Tech forward Marcus Santos-Silva (14) during the second half of a college basketball game in the Sweet 16 round of the NCAA tournament in San Francisco, Thursday, March 24, 2022. (AP Photo/Tony Avelar)

After a promising freshman year, Mark Williams returned to Duke and posted one of the most dominant interior seasons of recent ACC lore.

The 7-footer started all 39 games for Duke; he averaged 11.2 points, 7.4 rebounds and 2.8 blocks per game. Williams shot 72.3 percent on 2-point attempts this season, which ranks No. 5 nationally, per KenPom. During ACC play, Williams led the league by shooting 72.7 percent on 2-point shots.

In theory, Williams could’ve tested NBA Draft waters a year ago; however, he decided to return for his sophomore season. It doesn’t always work this well, but Williams certainly boosted his stock as a prospect. He bigger, more athletic laterally and his chops in pick-and-roll defense are improved.

Williams, who averaged 4.8 blocks per 40 minutes this season, has the potential to become a defensive anchor in the NBA. There’s a lot of work to get from here to there, but that’s one outcome for Williams.

There’s some fluidity with Williams in terms of where he projects in the first round. Currently, ESPN has Williams mocked as the No. 21 pick in the 2022 NBA Draft. That seems mostly fair, although there are reasons to consider Williams as a late lottery pick, too.

NBA franchises like Charlotte and Portland could take a plunge early on Williams. Both teams project to have late lottery picks, along with a need at the center position, as it currently stands. Drafting for need isn’t necessarily the best process, but it can serve a purpose.

Williams made tremendous strides as a defender, but he can still be played off the floor when opponents go 5-out on offense and/or start cooking in pick-and-roll action. That’s going to happen in the NBA, too. The collective shooting, passing and ball-handling in that league is in a world of its own.

However, an organization could look at Williams and see a defensive stabilizer — with proper development. Team that want to play drop coverage in the pick-and-roll will be intrigued by Williams rim protection and 9-foot-8 standing reach. Recently, Williams put together a masterful performance in drop coverage vs. Michigan State in the NCAA Tournament.

With his quick-leaping abilities, second jump and speed, Williams covers a lot of ground on defense, too. He could be used as a player that guards closer to the level of the screen as well.

Williams does have a tendency to over-help, lunging for blocks and leaving the rim exposed for put-backs. That, however, can be fixed. Williams will also get stronger, which should help vs. opponent post-up possessions. He could still be pushed around this season by shorter/stronger/more compact players.

Either way, Williams will need to up his communication level, too.

According to Bart Torvik’s shot data, Williams finished 78.1 percent of his attempts at the rim this season, including 96 dunks. In fact, Williams led the nation in dunks this season.

Where does AJ Griffin project in the 2022 Lottery?