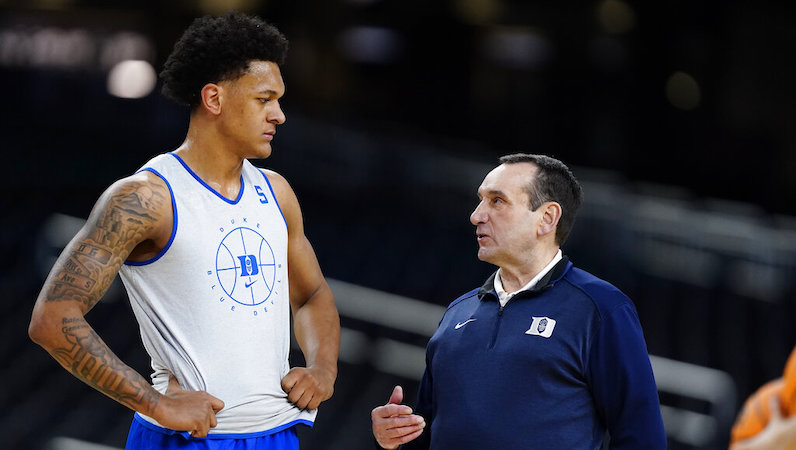 Paolo Banchero, to the surprise of no one, is headed to the 2022 NBA Draft. Duke and Banchero made the official announcement on Wednesday, April 20.

The 6-foot-10, 250-pound Banchero is the second Blue Devil to declare for the NBA Draft this week, joining center Mark Williams.

An all-around talent, Banchero has a splendid floor game. He led Duke’s roster in usage rate this season (27.2 percent), while ranking second in both assist rate (17.5 percent) and defensive rebound rate (19.1 percent). Banchero saved his best for last this season. As the stakes rose, Banchero’s game only got better.

He’s a special playmaker; the court mapping and vision are so impressive. Banchero finished the season with a positive assist-to-turnover ratio as well: 124 assists, 92 turnovers. (Per 40 minutes: 3.9 assists, 2.9 turnovers).

According to Pivot Analysis, Duke was +452 in 1,249 minutes with Banchero on the floor this season. The Blue Devils posted a net rating of +22.2 points per 100 possessions in those minutes.

Banchero was named First Team All-ACC and to the AP All-American roster. He is the final All-American player to be coached by Mike Krzyzewski.

Joey Baker will return for 5th season with the Blue Devils