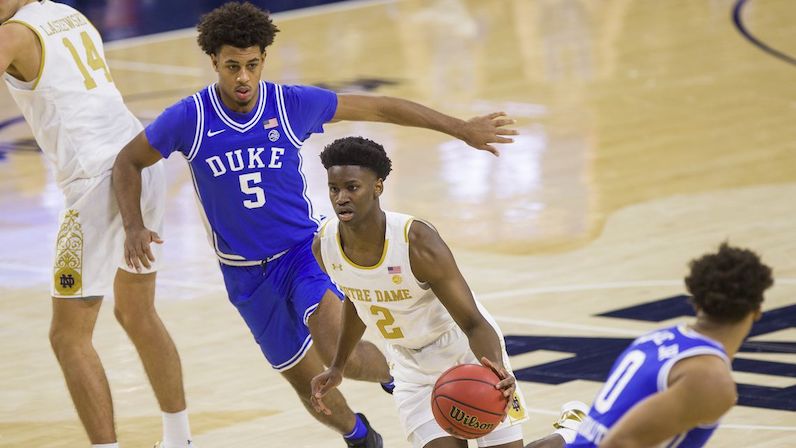 Jaemyn Brakefield, a freshman power forward at Duke, will enter the NCAA transfer portal. Brakefield made the announcement on Twitter.

During his freshman season, Brakefield appeared in 22 games for the Blue Devils, including two starts. Brakefield averaged 3.5 points and 2.5 rebounds per game, while shooting 31.4 percent on his 3-point attempts.

A top-40 prospect in the 2020 class, Brakefield is a highly gifted offensive player; at 6-foot-8, Brakefield can score from all three levels of the floor. He runs the court well and has a smooth lefty jumper, which he can extend out to 3-point range. Brakefield can switch some on defense as well.

Duke’s frontcourt was crowded in the 2020-21 season — even after Jalen Johnson declared for the draft in February. Brakefield’s spot in the rotation fluctuated; minutes were never consistent.

Looking ahead to next season, the outlook for Brakefield would’ve been a little murky, too. Matthew Hurt has an NBA Draft decision to make; freshman center Mark Williams came on strong at the end of the year as well.

If Hurt leaves and Williams returns, Brakefield likely still enters as the team’s No. 3 big guy. Duke is set to add bluechip power forward Paolo Banchero, who projects as a top five pick for the 2022 NBA Draft.

The door is still open for Hurt to return, which would complicate the math even further, though that seem unlikely at this time.

There’s freshman power forward Henry Coleman, an intriguing team defender and one of the strongest players in the ACC. Coleman should be back in Durham. He, too, would’ve competed with Brakefield for playing time in Duke’s rotation.