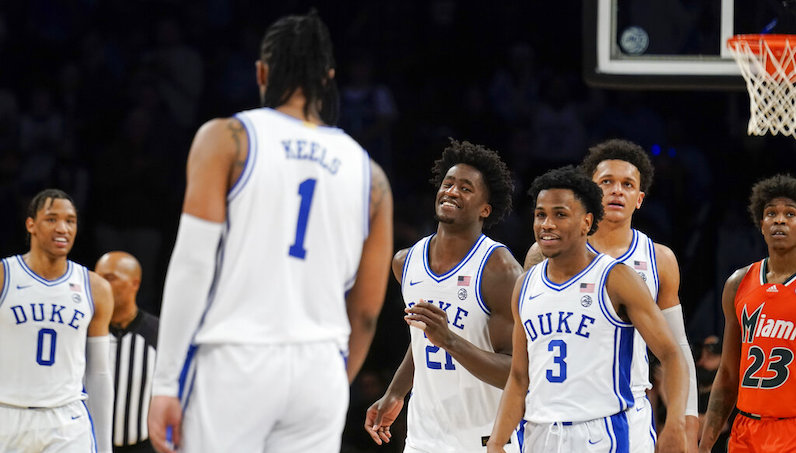 Duke's Jeremy Roach (3), AJ Griffin (21) and Trevor Keels (1) celebrate in the final seconds of the second half of an NCAA college basketball game against the Miami during semifinals of the Atlantic Coast Conference men's tournament, Friday, March 11, 2022, in New York. (AP Photo/John Minchillo)

After a semifinal win against Miami, Duke advances to the finals of the 2022 ACC Men’s Basketball Tournament. In his final season of coaching, Mike Krzyzewski will appear in his 22nd ACC Championship Game, breaking Dean Smith’s record of 21.

To get by an excellent Hurricanes squad, though, several players in Duke’s rotation stepped up. AJ Griffin led the Blue Devils with 21 points; however, Wendell Moore Jr. (17 points and three blocks) and Paolo Banchero (18 points, 8-of-9 2PA) were outstanding as well.

Coach K, however, made a key decision in the second half to attack Miami’s pick-and-roll defense.

All season long, the Hurricanes have countered being one of the smaller teams in the country (No. 212 in average height) by trapping on ball screens.

Miami isn’t a good defensive rebounding team; opponents have grabbed 30.3 percent of their misses vs. the Hurricanes this season, which ranks No. 266 nationally, per KenPom. There isn’t much rim protection, either. Only two players in Miami’s rotation — centers Sam Waardenburg and Anthony Walker — have block rates above 2.0 percent.

In lieu of trying to grind out defensive possessions, Jim Larranaga made the call to trap ball screens and look to force turnovers.

Currently, the Hurricanes rank 11th nationally with a steal rate of 12.8 percent. This will easily go down as the highest steal percentage for any Larranaga-coached team at Miami.

Four players in the rotation have individual steal rates of at least 3.0 percent, led by Charlie Moore (3.5 percent) and Jordan Miller (3.4 percent).

At times in the first half, Miami’s trap worked vs. Duke’s offense. The game was tied at 36-36 at halftime, thanks to the isolation brilliance of Griffin and Banchero.

During the second half, though, Duke altered its offensive menu. Krzyzewski called for a steady diet of what I refer to as Horns Corner Double.

It’s a simple set: starting in a Horns alignment, the point guard will dribble up, pick a side and enter into a dribble handoff (DHO) with one of the wings, who will then dribble off double-high ball screens.

This action puts Miami’s trap into a precarious situation. There are two ball screens and then a slip/dive to the rim. Mark Williams is the second screener, but he slips the screen as his defender gets ready to trap. If the ball handler can make a quick decision, it’s a 4-on-3 on the back side of the play.

On this possession, Moore enters the DHO with Trevor Keels, who flies off double-high ball screens from Banchero and Williams. As Keels clears, Banchero pops and Williams dives. Sam Waardenburg traps Keels; however, Banchero is ready to be an outlet. Banchero catches, gets an angle and hits Williams for two points.

This is where Banchero as an offensive fulcrum is at his best — a middle-of-the-floor connector. When Banchero catches the ball, the 6-foot-10 passing hub can scan the court and make reads. He finished with four assists and zero turnovers.

By my charting, Duke ran this variation of Horns 24 times in this game, including 23 times in the second half, which is wild.

Duke didn’t score the one time it ran this action in the first half, although Moore used a gorgeous skip pass to hit Keels for a wide-open 3-point attempt.

Now, the Blue Devils have run this set for years; here’s a look after a timeout vs. Louisville from last season.

However, Coach K spammed this look last night — running it until Miami was forced to adjust its coverages, and then running it some more.

One of the things Miami tried to do was jam the action by having the first screen defender — not the second — trap the ball handler.

Here, Keels takes the DHO from Jeremy Roach and gets set to dribble off. Before Keels can get to Williams, Miller juts out to trap Keeps with Moore. This forces Kam McGusty to come off Roach in the strong-side corner to tag Banchero. Keels makes a great read/pass; he throws back to Roach in the corner, who attacks a scrambled defense and scores at the basket.

Miller is an excellent and versatile defender, but this is a big ask: slide your feet quickly enough to corral a ball handler that’s coming off a DHO and another ball screen.

On this possession, Moore picks up a foul on Miller.

For one stretch of the second half, Duke shifted to its small-ball lineup: Banchero at center, with Williams and Theo John on the bench. These lineups have been rather good all season for the Blue Devils. It’s an effective way to grease the wheels on offense and switch 1-5 on defensive. Miami’s pick-and-roll offense, which attacked Williams, forced Duke to try this approach.

Once again, Miami looks to jam the action with an early trap. Keels, however, remains poised and patient. The freshman strings the coverage out with an extra trap. Keels picks up his dribble and steps through; all of a sudden, it’s a 5-on 4 for Duke. With shooters in each corner — Griffin and Roach — Miami’s back-line help defense has two guys to guard three targets. Banchero dives to the rim and Keels hits him like a tight end running the seam, which turns into another dunk.

Banchero now has 36 dunks on the season and is shooting just under 66 percent at the rim.

Back when Miami upset Duke in January, the Blue Devils tried lineups with Banchero as the de facto center. Miami’s 5-out offense continued to carve them up, though. It’s just a one-game sample, but Duke was -7 with those groups on the floor, per Pivot Analysis.

Up in Brooklyn, however, things were different for Duke: +5 in two minutes with Banchero at the 5. That’s not much, but it was a functional in a close, competitive game.

The Hurricanes also looked to switch on the action. This tactic allowed Miami to keep the ball in front and avoid 4-on-3s. However, with the matchups scrambled, Duke could go at whatever mismatch it wanted.

Banchero, of course, is the ultimate matchup-beater.

Ideally, Larranaga would likely prefer Miller to sag off Williams and at least make this entry pass to Banchero more difficult. Alas, no dice.

Here’s another switch for Waardenburg. This time, though, Miami avoids any obvious suboptimal cross-match. Instead, Moore makes an incredible play vs. Isaiah Wong, another All-ACC performer. This is an outstanding bit of deceleration from Moore, who drives hard and hits the brakes, before lofting in a fadeaway jumper over Wong and Waardenburg.

Larranaga also tried one possession of zone defense in the second half; the hope here is to get Duke out of this Horns double ball screen action. The Blue Devils are an excellent zone offense, though. Banchero flashes to the nail, as usual, and Moore makes another daring play.

Miami also worked to jam the action even earlier in the possession — by having the DHO defender get on the top side of the Duke player coming out of the corner.

Here, Moore tries to deny the handoff from Keels to Roach. As another counter, Roach cuts backdoor and Duke flows from there.

To close the game out, Duke mixed it up a little. The Blue Devils started in another Horns alignment; Moore faked like he was coming to get another DHO from Keels. Instead, he cleared to the weak side. With the corner empty, Keels and Banchero ran pick-and-roll, which the Hurricanes switched.

In a one-point game, Miami has this bottled up. However, WMJ catches Moore ball-watching and cuts backdoor. Meanwhile, Griffin shakes up from the corner, which freezes Wong. Keels spots this and threads a dime to Moore. Miller fouls and Moore went on to drain two clutch free throws.

Postseason basketball is all about adjustments. When it’s win-or-go-home, teams must be able to play behind the base package. During a gutsy win in Brooklyn, the Blue Devils did just that.

Now, however, the difficulty ratchets up another notch: the ACC Championship Game in primetime. Virginia Tech is a better, more versatile defensive unit than Miami. Obviously, the Hokies present serious challenges with their offense, too.

With that note, Justyn Mutts is one of the best team defenders in the country: his help rotations are excellent and his activity level is off the charts.

When Duke defeated Virginia Tech earlier this season at Cameron Indoor, the Blue Devils leaned heavily on their small-ball lineups: Banchero at center, along with four guards/wings. That group played 20 minutes together: Duke +16, 1.35 points per possession, according to Pivot Analysis.

Monstrous stretch of play for Duke with the Banchero at 5 lineup + AJ Griffin, Wendell Moore, Trevor Keels and Roach, which I’ve been clamoring for more of all season. Impressive defensive outing for AJ Griffin too – impact plays, nailing rotations + closeouts vs. a good offense

Is WMJ the ACC’s Most Improved Player?