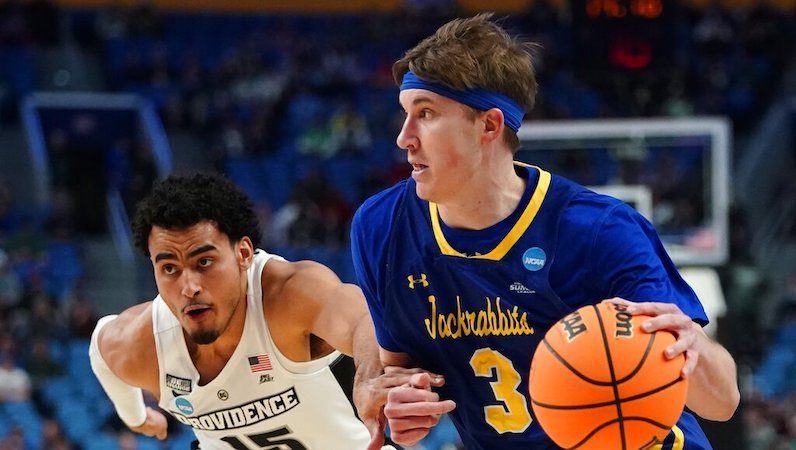 South Dakota State's Baylor Scheierman (3) drives past Providence's Justin Minaya (15) during the first half of a college basketball game during the first round of the NCAA men's tournament Thursday, March 17, 2022, in Buffalo, N.Y. (AP Photo/Frank Franklin II)

Baylor Scheierman picks Creighton. Now, the recruitment for one of the top transfers of the 2022 offseason is complete. The Bluejays won out over Duke, Clemson, Nebraska and Arkansas.

Scheierman won Summit League Player of the Year honors this season, while averaging 16.2 points, 7.8 rebounds and 4.5 assists; he shot 54.5 percent on 2-point attempts and 46.2 percent from beyond the arc. Scheierman was the primary catalyst for a South Dakota State offense that finished the season No. 1 nationally in effective shooting rate (59.1 eFG%) and 3-point percentage (43.7 3P%).

The 6-foot-6 Scheierman is an assist and rebound machine, too. During the 2021-22 season, he recorded 12 double-doubles: 22.4 percent assist rate, 24.2 percent defensive rebound rate.

The next level — playing in the NBA — was a key component of Scheierman’s transfer process. He wants to show scouts and talent evaluators that his game is more transferable, while playing against tougher competition. Throughout his recruitment process, much was made about Scheierman’s wants in terms of NIL compensation, but a bigger part of the picture was his projected role.

Duke could’ve offered Scheierman an interesting role for next season as well. Scheierman would’ve worked the perimeter with junior point guard Jeremy Roach and freshman wing Dariq Whitehead, the Naismith High School Player of the Year and a projected 2023 lottery pick. That trio would’ve paired nicely with the frontcourt rotation of Dereck Lively, Kyle Filipowski and Mark Mitchell, all incoming 5-star recruit and Top 15 prospects in the 2022 class, along with Whitehead.

Clemson, on the other hand, would’ve allowed Scheierman to play on the ball a lot. With that group, Scheierman would’ve fit in with a talented backcourt: Chase Hunter, Boston College transfer Brevin Galloway and movement shooter Alex Hemenway. Scheierman and PJ Hall would’ve been an excellent 1-2 punch, too.

Of course, Clemson initially thought it landed Princeton transfer Jaelin Llewellyn, who committed to the Tigers back on April 12. However, one week later, Llewellyn re-opened his recruitment, a tough blow for Brad Brownell. He’ll now play for Michigan next season.