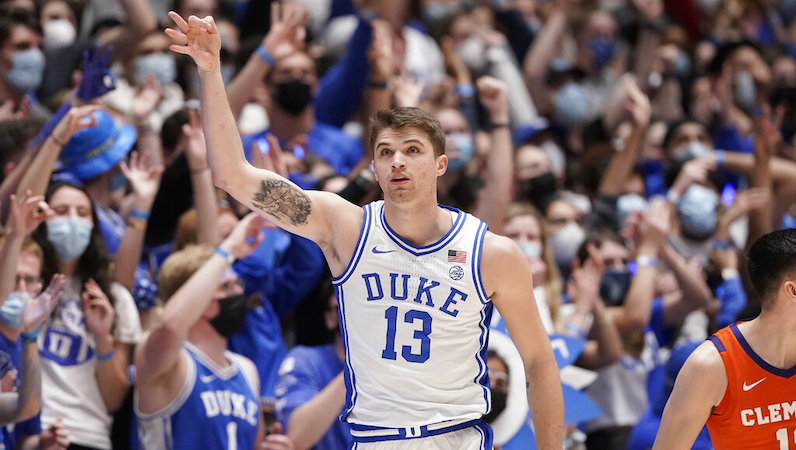 Joey Baker will return to Duke for his fifth and final season of college basketball. According to Duke Basketball, Baker also underwent hip surgery earlier this week.

During his time at Duke, Baker has appeared in 89 games, making four starts. Baker has 361 career points and 75 total 3-pointers to his name.

NEWS: Joey Baker underwent hip surgery on Wednesday and intends on playing for us next season (using extra year granted by NCAA due to COVID pandemic).

Best wishes on a successful recovery @Joey_bvker! Excited to have you back! pic.twitter.com/nlbNfYbRVC

Baker averaged 11.9 minutes per game this season, while appearing in 34 contests. In the middle of the season, Baker was a part of Duke’s rotation; however, as things tightened late in the season, Baker moved to a deeper reserve role.

Baker is the last piece of Duke’s storied 2018 recruiting class still in Durham. That was a five-player class, with four players currently in the NBA, including three 2019 lottery picks: Zion Williamson, RJ Barrett and Cam Reddish. A year later, Tre Jones was selected in the second round by San Antonio.

A massive 2022 recruiting class is set to arrive in Durham this summer. Jeremy Roach will likely return as the team’s starting point guard. Trevor Keels, currently, is a bit of a wildcard. Keels could head to the 2022 NBA Draft; he projects as a late 1st Round pick, although he could slip into the 2nd round, too. If both Roach and Keels return, the Blue Devils would boast arguably the top backcourt in the country, headlined by two players who would stand to make a lot of money off their NIL.

The return of Baker provides Duke with another veteran presence, which can help bridge the gap from Mike Krzyzewski to Jon Scheyer. Baker should also provide 3-point shooting from off the bench — along with freshman Jaden Schutt — added lineup flexibility. Baker can play the 3 or the 4 in some small-ball lineups. That doesn’t have to be a key component of Duke’s mix for next season, but it’s one more card to play.