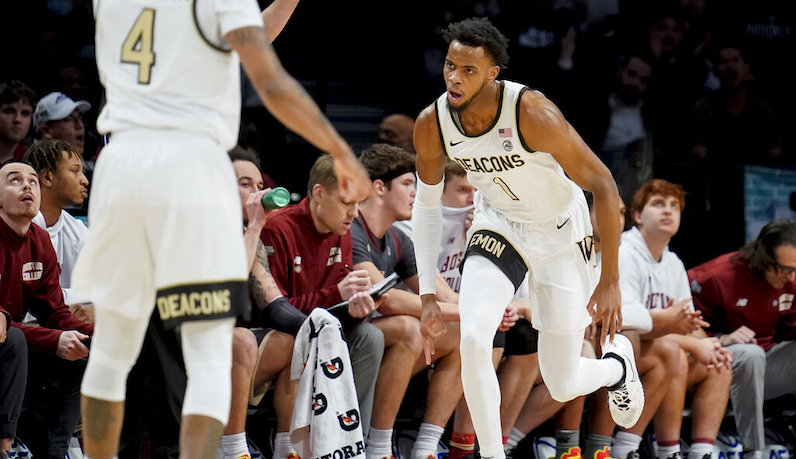 Isaiah Mucius, the longest tenured rotation player at Wake Forest, will enter his name into the 2022 NBA Draft. Mucius, however, will also maintain his college eligibility — should he want to return for a fifth season of college basketball. The 6-foot-8 senior forward has an extra year of COVID/NCAA eligibility remaining.

During his four seasons with the Demon Deacons, Mucius appeared in 117 games, including 80 starts; he averaged 8.3 points and 4.1 rebounds per game.

In terms of scoring, the 2020-21 season with IM’s best: 10.3 points per game. However, in his second season under Steve Forbes, Mucius took on a new role: perimeter sniper.

It proved to be a good recipe for Muicus: lower usage, greater efficiency. As a result, his effective field goal percentage (56 eFG%) and true shooting rate (58.1 TS%) climbed dramatically. Given his height, along with a little bit of defensive upside, this type of shooting profile is interesting as a deep prop prospect.

Mucius holds a special place in recent history for Wake Forest basketball. Initially a 4-star recruit in the 2018 class, Mucius played two seasons for Danny Manning. When Steve Forbes was hired in April 2020, Mucius was the first player to commit to return to play for the new coach.

During the 2021-22 season, Mucius was an important secondary weapon for a team that won 25 games and finished with a top-40 offense.

According to Synergy Sports, Mucius ranked 16th in the ACC (among players with 100+ possessions) in terms of spot-up efficiency: 1.11 points per possession. Only five other ACC player scored more point this season on spot-up possessions: Dane Goodwin, Kam McGusty, Brady Manek, AJ Griffin and Daivien Williamson.

Unfortunately, Wake Forest fell just short of making the 2022 NCAA Tournament, which means the 2022 NIT was the lone bit of postseason experience for Mucius.

Mucius could return to Winston-Salem and once more; however, there are several other moving parts in play for Forbes. Namely, what will happen with Williams (likely headed for the NBA Draft) and LaRavia, another draft possibility.