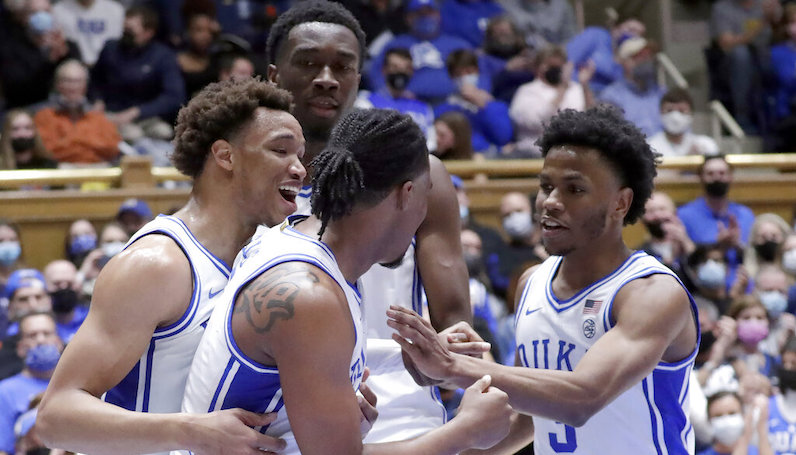 According to Duke assistant coach Chris Carrawell, there’s still no return date set for Trevor Keels. Since suffering a scary leg injury at Florida State, Keels has missed the last two games for the Blue Devils.

For the season, Keels is averaging 11.9 points (30.3 3P%), 3.6 rebounds, 3.2 assists and 1.9 steals per game. While the shot has been up and down, Keels is an engined of offense for the Blue Devils. Prior to the injury, Keels was the team’s leading pick-and-roll ball handler.

Duke associate head coach Chris Carrawell, on Zoom with reporters just now, says it's still up in the air whether or not Trevor Keels will play Saturday at Louisville.

Keels has missed the last two games after injuring his lower leg late against Florida State.

According to Synergy Sports, Keels has scored 1.08 points per pick-and-roll possession this season. He’s been very productive in transition, too.

Duke has plenty of other capable ball handlers, of course. Wendell Moore Jr. is one of the top on-ball creators in the country. Jeremy Roach has also played well in the absence fo Keels.

Up To This Point (Guard)

Roach entered the season as one of the ACC’s most intriguing X-factors; however, with Moore making a leap, and the arrival of Keels, Roach took on a secondary role. Plus, with Paolo Banchero, Duke still needs plenty of its offense to flow through the high post or elbow.

As such, Roach has a usage rate of only 15.8 percent this season. Roach is one of only 12 ACC players with a sub-17 percent usage rate to play 500+ minutes, so far. Most of the other players are lightly-used defensive centers — Dallas Walton and Ebenezer Dowuona — or spot-up 3-point shooters, like Hunter Cattoor or Jordan Miller.

There are other point guards on the list, although they’re more defensive-minded performers: Reece Beekman and Jarrod West.

With the ascent of star wing AJ Griffin, Roach remained in the rotation, albeit as a super-sub off the bench. Roach could spell any perimeter player in Duke’s rotation — or hit the floor when Coach K wanted to play smaller and shift Banchero to the 5.

For the season, Duke is +127 in 349 minutes with Roach, Moore and Keels on the floor together; this includes an offensive rating of 120.5 points per 100 possessions, according to Pivot Analysis.

The small-ball lineup of Roach, Moore, Keels, Griffin and Banchero is +34 in 47 minutes. That crew has a net rating of +43.4 points per 100 possessions, which is nuts.

Once again, with Keels on the sideline, the rotation has shifted. Roach has started the last two games. Over that stretch, Roach hasn’t set the world on fire from a scoring perspective (3-of-11 3PA); the jumper just hasn’t quite been there this season (44.8 eFG%).

However, he’s done pretty well creating for others. During the wins over Syracuse and Clemson, Roach tossed out a combined 18 assists — nine in each game — to only two turnovers.

The downhill drive game of Keels can open up a lot for Duke’s offense, but Roach still managed to crack Syracuse’s zone and find Mark Williams or Theo John at the rim.

In Duke’s transition game, Roach also put together some nice moments as a link-up player with hit-ahead dimes for easy buckets.

Joey Baker has taken on a larger role, too, and found success: 6-of-10 on 3-point attempts vs. Syracuse and Clemson.

With Roach on the floor vs. Syracuse and Clemson, Duke was +29 in 68 minutes. The Blue Devils scored 122.4 points per 100 possessions, according to Pivot Analysis.

There’s some stuff Roach needs to improve. On offense, that centers on his ability to make open 3-pointers — when Keels returns — and take care of the ball. When Roach attacks off the dribble, some of his forays into the lane go nowhere and result in tough, contested shots vs. taller players.

The larger concerns focus on his defense, though.

Roach is the smallest player in Duke’s rotation; he provides a target for teams to go after, especially when the Blue Devils are switch 1-4 or 1-5.

Duke can live with some of that stuff. It’s a part of basketball. What’s actually troubling, though, is when team take advantage of Roach’s off-ball defense.

Roach has a tendency to ball-watch or not stay attached to his assignment. His defensive breakdowns result in layups or open 3s. The Miami game was the most obvious example of this — as the Hurricanes lifted Duke’s defense and back cut into space for rim finishes. However, that game wasn’t an isolated event.

Obviously, for Duke to hit its ceiling this season, the Blue Devils need a healthy Keels in the rotation. He’s too much of a talent and does too much for the on both ends of the floor.

In the meantime, though, Coach K will need his sophomore point guard to continue to produce.