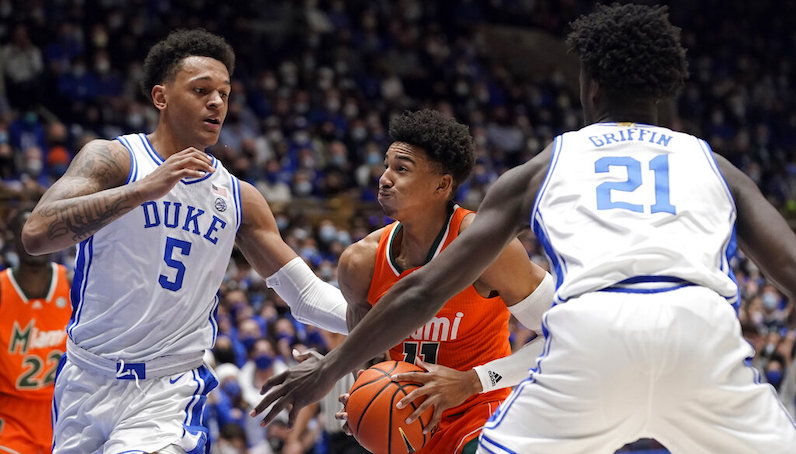 Ahead of Duke-Texas Tech, I wrote an extend breakdown piece, which looked at the Sweet 16 matchup from a variety of angles. So, make sure to check that out.

However, there’s one last item I wanted to touch on, quickly: interactions and off-ball actions with AJ Griffin and Paolo Banchero.

Since the month of December, AJ Griffin has played brilliant basketball, while emerging as a top 5-6 prospect for the 2022 NBA Draft. During this season, Griffin has played alongside a quartet of ball-dominant creators: Banchero, Wendell Moore Jr., Jeremy Roach and Trevor Keels. This context has pushed Griffin into more of an off-ball role.

To his credit, Griffin has both embraced and excelled within this structure.

Griffin moves beautifully without the basketball — both as a cutter and spot-up shooter. Just as Big Boi and Andre 3000 would suggest, Griffin drops bombs from deep. He floats around the arc (45.5 3P%), with unlimited range, looking for catch-and-shoot opportunities.

According to Synergy Sports, Griffin has an effective shooting rate of 61.5 percent on spot-up attempts.

Often, Banchero is the creator of said opportunities.

At 6-foot-10, 250-pounds, Banchero packs a ridiculous combination of size and skills.

Banchero, who averages 3.9 assists per 40 minutes, is one of only 10 high-major players with 17.0 percent defensive rebound rate, 17.0 percent assist rate and 2.5 percent block rate — along with Justyn Mutts, Trevion Williams and Isaiah Mobley.

Banchero is the ultimate “at the nail” player in the country. The freshman from Seattle can face-up and work from a triple-threat: shoot, pass (kick-outs for 3s or lobs for Mark Williams) and look to drive downhill with a bag full of stutter rips and spin moves.

Really nice adjustment from Syracuse to junk the game up vs. Duke with the Triangle-2, flipping back to the 2-3, and moving the target on defense. Triangle look zone up vs. Banchero at the nail, denied kick-out passes for AJ Griffin relo 3s https://t.co/H99JHY4mK9

During the ACC Tournament, Syracuse had to reorient its entire defense to curtail the Banchero-Griffin connection. Syracuse predominantly played a Triangle-and-2 zone defense, not the normal 2-3 concept, which zoned up vs. Banchero at the nail/elbow and kept a man defender on Griffin at all times.

Of course, Banchero gets his dimes in a number of different fashions, including post-up kick-out passes. Duke spot-up players have scored 1.1 points per possession (54.7 eFG%) after they receive a post-up pass from Banchero.

Duke has also gone heavy this season with its 4-5 pick-and-roll attack — with Mark Williams as a screen-and-dive man.

In fact, Williams is Banchero’s most assisted play this season, and it’s not particularly close. On the year, Banchero has 115 total assists, which have gone to eight different players. According to CBB Analytics, Banchero has assisted Williams 36 times this season.

Moore is No. 2 within Banchero’s assist network. Duke’s captain has 25 field goals assisted by Banchero this season. Griffin is No. 3 with 17.

Duke has also taken advantage of having one of the best shooters in the country on its roster. Now, this isn’t the Blue Devils coming down the floor and running an endless supply of Floppy action for JJ Redick. However, the Blue Devils have round ways to involve Griffin as an off-ball mover.

This repertoire includes Duke’s wide pindown action, which the Blue Devils have run for years now. Griffin isn’t a huge rim pressure threat; however, when defenders lock-and-chase on this action, Griffin can curl hard and get into the paint.

This action can be especially daunting when Banchero — a matchup nightmare — is the one setting the pindown screen.

This is identical to how Duke used this curl action with Zion Williamson (as the screener) and RJ Barrett in the 2018-19 season. Similar to Zion and Barrett, Banchero and Griffin are also set to go within the first 6-7 picks of the 2022 NBA Draft.

(Banchero has been mentioned as a potential Top 3 pick all season, along with Gonzaga’s Chet Holmgren and Jabari Smith of Auburn. At this point, though, I just don’t see how any front office could have Banchero below the No. 2 pick. Let’s not overthink this. That should be his floor.)

If the defense covers Griffin on the pindown, Banchero will pop out and look to isolate in space — essentially with one side of the floor cleared out.

Regardless of coverages — man-to-man or zone defense — the Blue Devils have also used Griffin in their baseline runner action.

Once again, Duke can play Griffin and Banchero off one another in this action.

Texas Tech switches on a ball screens, but the Red Raiders will also look to switch on off-ball exchanges, like pindowns. It’s not an automatic switch, but it’s something they do freely.

This tactic denied clean catch-and-shoot looks for Agbaji and is something TTU could used for Griffin or other Duke wings.

During the Second Round win over Notre Dame, Texas Tech switched on some off-ball actions and down screens vs. movement shooters like Dane Goodwin and Cormac Ryan.

These off-ball switches come with a little more buffering time, however, which can lead to some clean turn-and-burn looks. Here, Goodwin gets loose for a 3-ball off Notre Dame’s Floppy action.

This time, it’s more Floppy action — but with Ryan as the receiver. McCullar switches out on Ryan and gets into his no-middle stance. However, with TTU trying to scramble switch on the back side of the play, there’s a rare lapse in rim protection. Ryan capitalizes.

Griffin has shown this season: if you switch a larger defender on him in these off-ball actions, he’ll look to get busy.

From an after-timeout play vs. FSU: here’s more of that baseline runner action. 7-foot-2 Tanor Ngom switches out and Griffin lights him up from deep.

With the threat of his step-back jumper, Griffin can leverage his handle to put the shakes on switch defenders, including big-time talents like John Butler.

If Duke’s half-court offense stagnates — in the pick-and-roll, especially — then it should look to dial up off-ball actions for Griffin with Banchero as the screener. Take the shot or attack the switch.