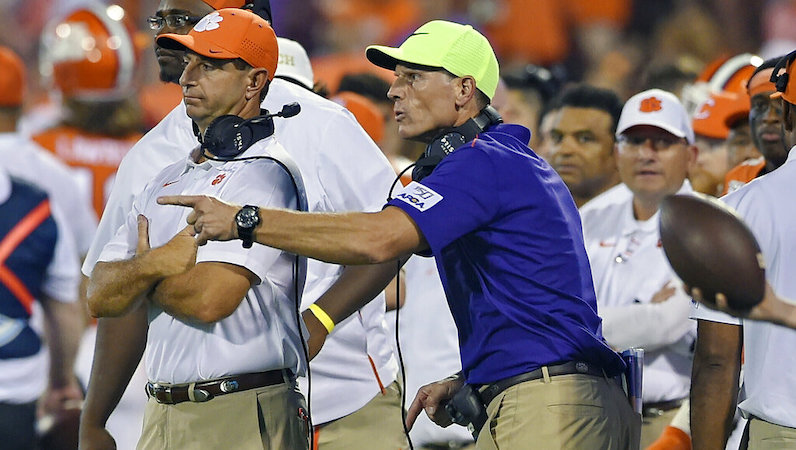 When you’re in the moment, truly in the middle of something, it can be hard to tell whether or not it’s significant. That’s the thing with observing change over time: it requires perspective. Things have run smoothly with Clemson football for some time now; however, the program is currently faced with an inflection point.

The last decade of college football has seen Clemson rise as a superpower. Under the watch of Dabo Swinney, the Tigers became one of the country’s “It” programs, along Alabama, Ohio State and Georgia.

This steak wasn’t all sizzle, either. Clemson dominated the ACC, including six straight league titles, and claimed two national championships: 2015 and 2018. As the university and program’s benefactors spent like crazy to keep the trains running on time, and maintain one of the top coaching staffs in the sport, the Tigers recruited like crazy.

As a result, Clemson soared to new heights. Going back to 2011, the Tigers have 11 straight seasons of 10+ wins. However, the height of the run started in the 2015 season, the sophomore year for star quarterback Deshaun Watson.

They lost those three games by a combined 11 points. One of those defeats took place on the road vs. a team that’s no longer even in the ACC: an overtime defeat at Notre Dame.

Things, however, seem on the precipice of change.

The first season after Trevor Lawrence and Travis Etienne didn’t go as planned. New starting quarterback DJ Uiagalelei struggled in 2021; the massive quarterback completed less than 55 percent of his passes, while averaging a measly 6.0 yards per attempt. Without Etienne’s ball-toting brilliance, Clemson ranked 80th in the FBS in ESPN’s offensive efficiency metric.

Following the season, several former blue-chip pieces on offense left the program: wide receiver Frank Ladson and quarterback Taisun Phommachanh, once thought of as the Next Great Clemson QB.

Those departures pale in comparison to what took place with the coaching staff and administration, though. Brent Venables, the top defensive coordinator in college football, left to become the head coach at Oklahoma. This development could spell very real trouble for Dabo and Clemson.

For all intents and purposes on gameday, Venables is the actual coach of that team https://t.co/4DtypGBIma

Around the same time, Virginia hired away Clemson’s offensive coordinator, Tony Elliott, to become the next head coach in Charlottesville. Elliott may not have the same reputation as Venables, but he’s a very good coach, and someone that’s been a part of Clemson’s culture for decades, now.

On top of that, athletic director Dan Radakovich, Swinney’s former boss, who arrived at Clemson in 2012, left for the same position at Miami.

The possible brain drain goes beyond just those three guys, however. Former Clemson assistant Ted Roof will join Venables with the Sooners in Oklahoma. So, too, will Miguel Chavis, a former Clemson player, like Elliott, who has been a part of Swinney’s staff since 2017. Chavis will be the defensive ends coach at OU.

As all of this takes place, the landscape in the ACC is shifting — beyond Clemson’s reach. With Miami backing the Brink’s truck up (from the hospital to the football facility) in order to hire Mario Cristobal away from Oregon, there’s a possibly a new rising power in the league.

Obviously, that’s a big if; however, Cristobal is a powerfully recruiter, and he’s just been placed atop a program that’s willing to spend ungodly amounts of money to be relevant, again.

While the results have been mostly one-sided, the old Textile Bowl — Clemson vs. NC State — has become a key Atlantic Division game.

Nothing terrifies NC State fans more than weighty expectations, but the 2022 season is another chance at a real breakthrough for the Wolfpack and Dave Doeren.

When Wake Forest won the Atlantic Division in 2021, it snapped a six-year streak of Clemson winning the division, with relative ease.

On paper, Clemson may still remain as the most likely candidate to win the Atlantic next season; however, the odds will be adjusted.

By this point, everyone who follows college sports knows the phrase: “It’s not the X’s and the O’s but the Jimmys and the Joes.” It serves as a vaguely folksy reminder of the importance of recruiting: above all else, you need good players to win games. The more good players you have, the better your team is at said sport.

Well, for the first time since 2017, Clemson is looking up at other ACC programs in terms of nationally recruiting rankings. Mack Brown and UNC have the league’s top class, headlined by two 5-star linemen: Zach Rice and Travis Shaw, who picked North Carolina over Clemson.

Florida State, which dominated the Atlantic prior to Clemson’s full ascent, owns the ACC’s No. 2 class. If Mike Norvell could make FSU operational, once more, it would mean another existential threat for Clemson, especially as Cristobal and Miami enter the fold, too.

Clemson has a borderline top-15 recruiting class; it’s nothing to sneeze at. With only one 5-star signee, though, and less depth (13), this isn’t a gold standard group.

This is one of the places where the departure of Venables hurts most. Shortly after he accepted the Oklahoma job, several blue-chip recruits de-committed from Clemson, days before Early Signing Period. Daylen Everette, a 5-star cornerback from IMG Academy, is one of those three flips.

Dabo, on the transfer portal: "It's chaos right now. Tampering galore. Adults manipulating young men. Education is like the last thing now." Calls for the return of one-year sit for transfers, and get that year back upon graduation. "Keep the focus on graduation/education."

There’s no rest for the weary. Everette, who was a target of UNC before he committed to Clemson in June, will now head to Georgia. IMG Academy teammates Keon Sabb, a 4-star safety, and 4-star defensive end Jihaad Campbell, also de-committed from Clemson. Sabb is now with Michigan; Campbell is expected to sign with Alabama.

As the sport continues to evolve, it’ll be interesting to see how one of the game’s high-profile coaches learns on the fly, without the usual support system.