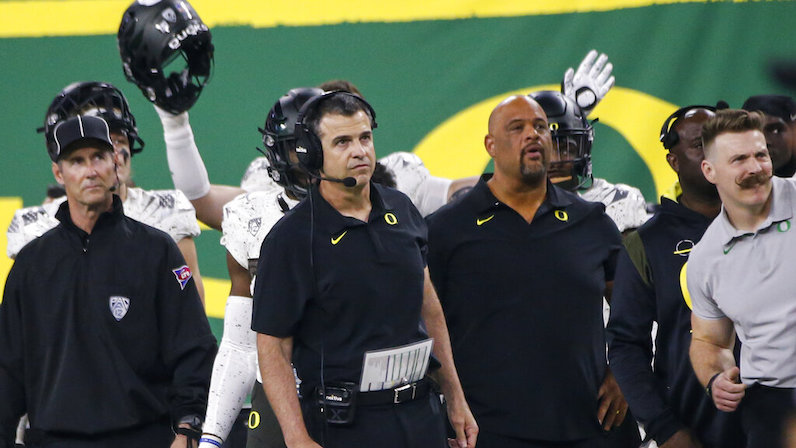 According to a report from Mike Ryan, the executive produce of The Dan Le Batard Show, Miami will hire Mario Cristobal to be its next head coach.

As of right now, Miami has yet to fire its current head football coach, Manny Diaz. That will likely change soon, though; a buyout will come once things with Cristobal conclude. Nothin is official, yet.

According to sources: Mario Cristobal will be the next Head Coach at Miami

After days/weeks of simmering, word emerged earlier this week that Miami would aggressively pursue Cristobal, who played football at Miami (1989-92). A former offensive lineman, Cristobal returned to Miami in 1998 as a graduate assistant; he remained there until 2002.

After the 2017 season, Cristobal was promoted to head coach; he replaced Willie Taggart, who left to become Florida State’s head coach. With Cristobal as head coach, Oregon has gone 35-13 (.729). Cristobal has led the Ducks to a Rose Bowl appearance (2019) and a Fiesta Bowl (2020).

Ryan has been a constant source of information throughout this process with Miami; he was ahead of the curve last month before the Hurricanes parted ways with former athletic director Blake James. Ryan has maintained that Miami would be willing to spend to get the right guy.

On Saturday, news broke that Lane Kiffin, another candidate for Miami, agreed to a contract extension with Ole Miss. Again, this intensified the full-court press for Cristobal.

Cristobal has reportedly gone back and forth on the two programs; some notes indicate a strong tie between Cristobal and Oregon, with a massive raise and extension awaiting in Eugene.

Cristobal makes $4.3 million annually as Oregon’s head coach — with another $700,000 in incentives. That incentives number could jump $1 million, though. Oregon, however, has reportedly come to Cristobal with a raise; this would take his annual salary up to $7 million.

As all of this is unfolding, Miami is still without a permanent AD. That, too, could change soon. Currently, the rumor mill has Clemson AD Dan Radakovich leaving for Miami.

As Ryan has indicated, Miami would be willing to spend above or match any offer. This tracks with what veteran sportswriter Barry Jackson is reporting: Miami and Cristobal are on the verge of a five-year deal that would pay him $8 million annually. Radakovich is expected to join, too.

Mario and UM have been in late stages of negotiations for a deal in $8 M a year range for deal longer than 5 years. Radakovich also expected to join Mario here. UM official expect both to come unless somebody "gets cold feet." https://t.co/Egbf2KodD7

Cristobal is an ace recruiter, who has deep ties to the South Florida region. With Miami willing to commit this type of money to a coach and its football program, the Hurricanes are looking to spend and recruit their way back into top-tier status. That’s usually a pretty good formula in college football.

According to another from from Aaron Fentress of The Oregonian, Cristobal cancelled recruiting visits in the state of California, ahead of Monday.

I'm told by sources that there was no 4:30 p.m. team meeting scheduled today for Ducks football (some reports claimed otherwise).

However, I've also been told that Mario Cristobal is flying back to Eugene tonight and has cancelled recruiting visits in California for Monday.