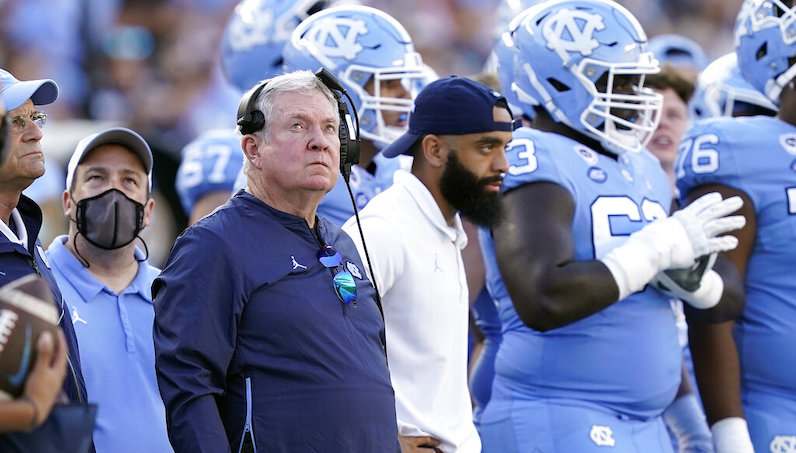 The top offensive tackle prospect in the 2022 recruiting class is headed to Chapel Hill. During a live broadcast Thursday night on CBSSports HQ, Zach Rice, 6-foot-6, 282-pound tackle from Lynchburg (Va.), committed to North Carolina. Rice rates as the No. 9 overall prospect in the 2022 class, per the 247 Sports composite rankings.

With this most recent commitment, UNC has 15 commits in its 2022 recruiting class, including two 5-star prospects: defensive lineman Travis Shaw and Rice. North Carolina currently holds the No. 9 recruiting class for that cycle — headlined by Shaw and Rice, two of the top-10 overall prospects in the class.

One of the key themes of this 2022 class for UNC is the state of Virginia: six of the 15 commits are from Virginia. That’s 40 percent of the class, currently.

Clearly, one of the best decisions Brown made when he returned to UNC was to hire Dre Bly as an assistant coach. Bly has emerged as one of the top recruiters in college football. With an emphasis in both North Carolina and Virginia, his home state, Bly has help add incredible talent to the program.

Bly was the lead recruiter for three 5-star prospects: Rice, Tony Grimes and Keeshawn Silver. Both halves of the dynamic quarterback-wideout combination of Sam Howell and Josh Downs were Bly’s responsibility, too. He was also the primary recruiter for several other guys in this 2022 class, including Pettaway, Chapman and Holloway.