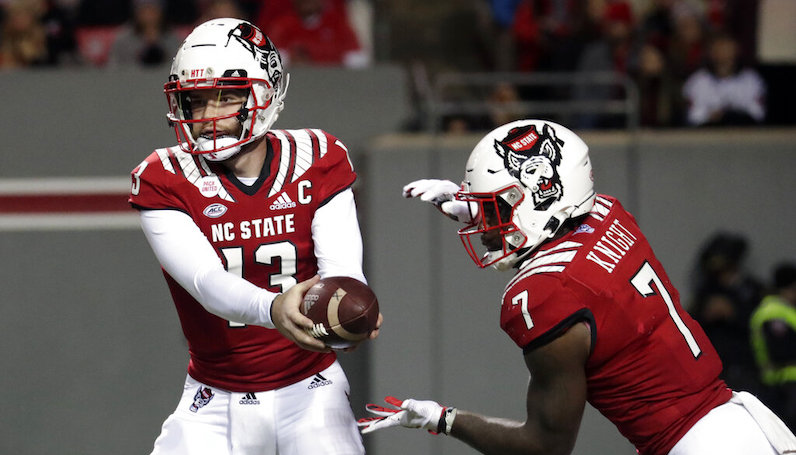 North Carolina State quarterback Devin Leary (13) hands off to running back Zonovan Knight (7) during the first half of the team's NCAA college football game against North Carolina on Friday, Nov. 26, 2021, in Raleigh, N.C. (AP Photo/Chris Seward)

It’s official: NC State quarterback Devin Leary will return to the Wolfpack next season. The 2021 campaign is still going, but truly: the pieces are falling into place for a possible big-time 2022 season in Raleigh

Leary informed the USA TODAY Network that he will return; the same report confirmed that All-ACC linebacker Payton Wilson will also come back for NC State.

Exclusive: Devin Leary told the @USATODAYNETWORK Wednesday that he's returning to NC State next season and will be joined by linebacker and roommate Payton Wilson.

During his first full season as a starter, Leary put together a monster performance. The New Jersey native completed 65.7 percent of his passes, while ranking inside the top five of the ACC in a variety of passing categories: yards (3,433), yards per game (286.1) and touchdown passes (35). Leary threw only five interceptions all season, too.

Leary’s decision comes one day after center Grant Gibson announced he’d return to Raleigh for one more year, his sixth in college football. This part of a larger trend for the Wolfpack, though. Leary is the latest in a group of veteran electing to return to Raleigh for the 2022 season, including a handful of defensive studs.