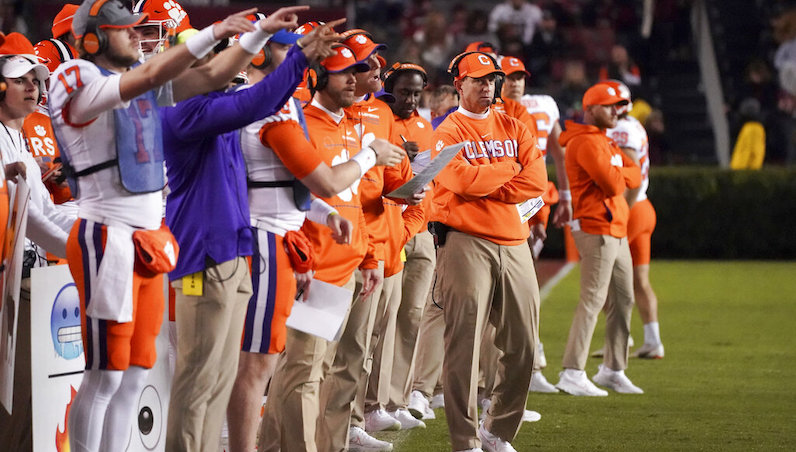 The last decade of Clemson football has seen the program soar to new heights. Under Dabo Swinney, Clemson claimed two national championships, while running roughshod over the ACC. During that blessed stretch of time, Clemson also enjoyed a relatively low turnover rate within its coaching staff.

Of course, Clemson spent a lot of money to ensure that its top-flight assistants and coordinators stuck around top. Now, those pieces could be changing, quickly.

For days now, Clemson athletic director Dan Radakovich has been rumored to be headed back to Miami. Radakovich, who worked at Miami in the 1980s, seems pegged to be The U’s next AD, although there’s no official report of that just yet.

Defensive coordinator Brent Venables, who has been Dabo’s right-hand man, is now the top target for the Oklahoma coaching vacancy. Venables was the highest-earning assistant coach in college football this season: $2.5 million.

With coaching vacancies at two other ACC programs — Duke and Virginia — Tony Elliott, Clemson’s offensive coordinator, could also be poached away for a head coaching opportunity. Elliott was a candidate for the Virginia Tech opening, too; however, that position went to Penn State defensive coordinator Brent Pry.

With AD Dan Radakovich in talks at Miami and OC Tony Elliott as a candidate at both Duke and Virginia, Clemson *could* have its biggest shakeup in over a decade. https://t.co/Pzr0oNhSH5

Keep all of this in mind: Clemson is staring down a program-altering moment. Venables has been the architect of so many excellent defenses; Elliott is a great coaching mind. Those two could both be gone, while the man who was their boss, Radakovic, could also leave town.