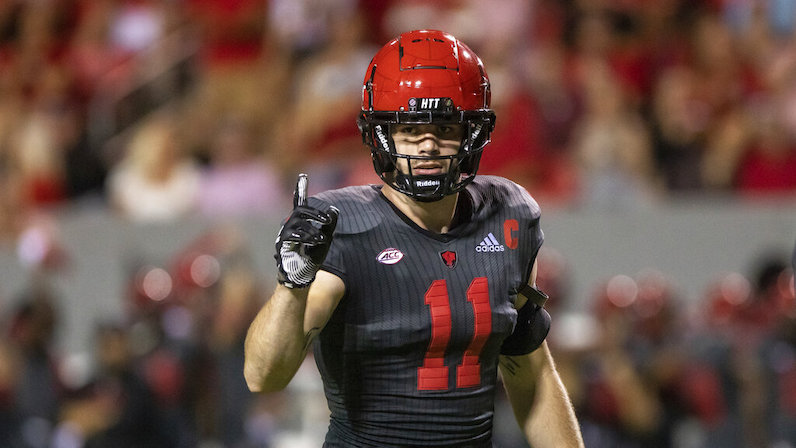 Payton Wilson, one of the top defenders in the ACC, is expected to return to NC State for the 2022 season. While this has been the assumption for some time now, Joe Giglio reported the news via an NFL source. Wilson won’t opt for the 2022 NFL Draft; he’ll return to Raleigh for another season.

This will be his fifth season with the program.

LB Payton Wilson is expected to return to NC State for the 2022 season, according to an NFL source I talked to on Tuesday.

Wilson, All-ACC in 2020, suffered a shoulder injury in the second game of the 2021 season. He had surgery in September

Following an All-ACC season in 2020, Wilson could’ve left for the 2021 NFL Draft; however, back in Jan. 2021, Wilson announced his decision to play more college football.

With Wilson in the middle at linebacker, NC State looked to have a ferocious defense in 2021. That proved true, too: the Wolfpack finished top 15 nationally in defensive efficiency. Unfortunately, most of that work came sans Wilson, who suffered a season-ending shoulder injury during the second game of the season at Mississippi State. He finished the year with five total tackles.

Injuries have always been an issue for Wilson — going back to high school. Wilson missed the entire 2018 season, his true freshman year, due to injuries, too. Wilson even played with two dislocated shoulders during a 2020 win over Georgia Tech. Despite the injuries, Wilson finished with 11 tackles, including 2.5 for loss.

Wilson led the ACC in tackles per game in 2020 (10.8); he finished the season ranked fourth in the FBS in total tackles, too.

Beyond Wilson, something cool is brewing in Raleigh with NC State football. After a strong 2021 season, several key defensive players have announced decesiions to return for 2022:

Now, with Wilson back, NC State will have its ringleader at linebacker. This linebacking group could be the deepest in the country, too. When Wilson and Moore went down with injuries, NC State received tremendous production from Drake Thomas and the speedy Vi Jones.

Assuming quarterback Devin Leary also returns, NC State is poised for another possible breakthrough season in 2022. If the defense can stay healthy, there’s a ridiculous amount of talent and continuity. Clemson hasn’t looked this vulnerable in ages, too. The Atlantic Division and ACC are both wide open.