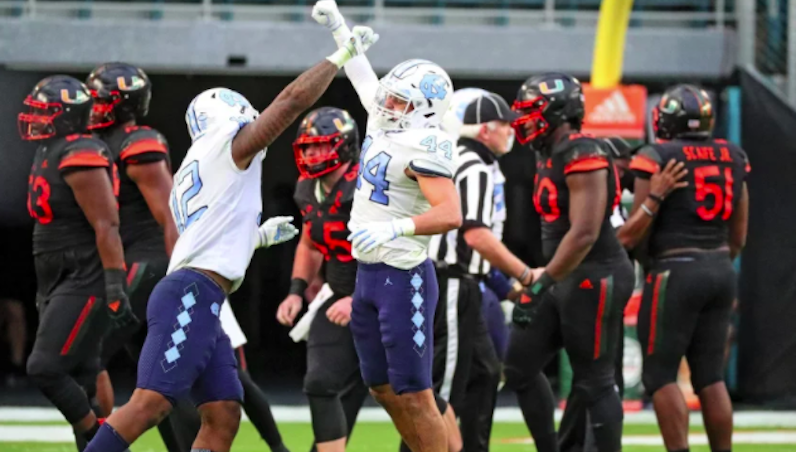 North Carolina linebackers Tomon Fox (12) and Jeremiah Gemmel (44) celebrate a stop against Miami during the first half of an during an NCAA college football game at Hard Rock Stadium In Miami Gardens, Fla, Saturday, Dec, 12, 2020. (Al Diaz/Miami Herald via AP)

With the commitment of 2022 5-star defensive tackle Travis Shaw, the hits keep coming for Mack Brown and North Carolina football. This one, however, is a little more grand.

The 6-foot-5, 310-pound Shaw is an in-state prospect; he plays his prep ball for Grimsley (Greensboro) High School. According to 247 Sports, Shaw ranks as the No. 4 overall prospect in the class and the top prospect in North Carolina.

This is monumental commit for UNC; Shaw is the one of the highest-ranked prospects to ever commit to North Carolina, as Ross Martin of Inside Carolina notes. Shaw is also the third 5-star commit Brown has landed since he return to Chapel Hill — along with Tony Grimes and Keeshawn Silver.

Travis Shaw is the second-highest-rated prospect to commit to #UNC in the internet recruiting era. https://t.co/s56bpyAXtE

Shaw camped with UNC over the summer. In recent weeks, though, the Tar Heels really started to gain ground and emerged as the favorites to land Shaw. North Carolina won out over Clemson, Georgia and North Carolina A&T.

North Carolina’s 2022 recruiting class is now up to 13 commits, with Shaw obviously as the crown jewel. Of that group, six are top-200 prospects, per 247 Sports. The recruiting efforts from Brown and his staff are incredible. In less than three years, this new regime has completely reinvented UNC football.