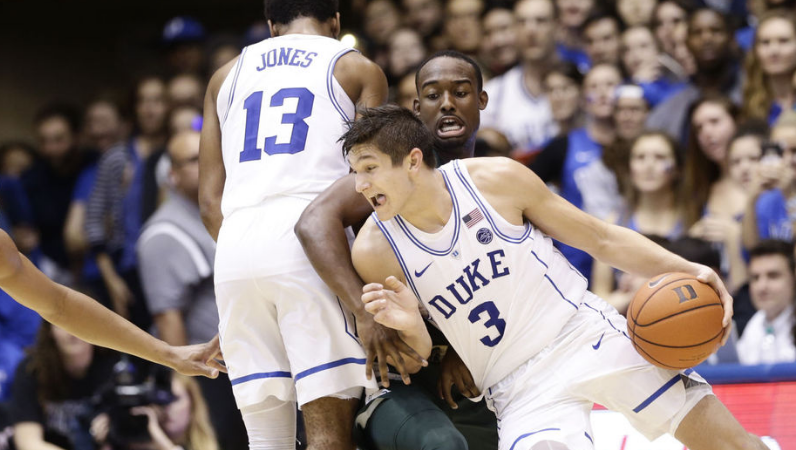 The motion offense Duke basketball uses is a thing of beauty. With the right personnel — shooters, ball-movers and screeners — it can be down right deadly, too.

I hope you kids enjoyed the brief summer vacation, because it’s time to hit the books again. And by that, I mean: the playbook. In the latest installment of this series, we look at one of Duke’s best end-of-game sets: the hammer play.

Well, I’m glad you asked! There are a lot of ways to design this play, but the objective of the play is to hit a shooter in the weak side corner for an open three-pointer.

The player with the basketball — primarily a guard — will dribble towards the baseline; sometimes this initial action comes off a pick-and-roll with one of the post players. As that action takes place, the middle of the floor is occupied by a shooter, who stands at the top of the key.

This is done space the defense (the shooter’s presence occupies a defender) and balance the floor — this is the first player back on defense. That’s important, too, because jumpers from the corner can very easily result in long rebounds.

On the weak side of the floor, one of the team’s wings will cut to the corner as his or her teammates dribbles baseline on the opposite side. This play is designed to get that person open; the primary goal is a catch-and-shoot triple.

The fifth and final player will set what’s called a hammer screen — essentially a back screen to the defender of the player that’s cutting to the opposite corner.

This play doesn’t have to be too complicated; there isn’t too much window dressing needed to get a good look. Even a team like the Golden State Warriors that can switch every screen can be caught off guard here. What’s important is the timing of the driver and the shooter, and the driver’s ability to make a long bounce pass.

If it works to perfection, though, bottoms ups.

Add the hammer play to the list of things made popular by the San Antonio Spurs. A lot of teams run this play now, but this is a set that San Antonio has perfected. Don’t believe me? Well, punch “hammer play” into a Google search, and see what comes up; the first four results that pop up involved the Spurs.

Tony Parker and Manu Ginobili made the hammer hum at its onset; nowadays it’s Kawhi Leonard and former North Carolina guard Danny Green doing the heavy lifting — although Parker and Manu are still hanging around, too.

Here’s a look at how Gregg Popovich and the Spurs run this action; this comes from overtime of a playoff game back in 2013.

The Spurs turned this play into an art form, but there’s no player more adept at throwing that tricky bounce pass than LeBron James — the world’s greatest passer. He can whip the ball an incredible distance with the flick of a wrist. This time, out of the post, he hits Mike Dunleavy Jr. for corner three.

Gah, like everything else, he makes that look too easy.

How does Duke hit nail with hammer?

Here’s a glance at the Blue Devils running this set — from the end of an ACC Tournament game in 2014 against Virginia. Before you wave hello to the Greensboro Coliseum, take notice of what’s happening here: late game scenario, Duke needs a bucket, quickly.

In what looks like a classic pistol set, Quinn Cook dribbles towards Rasheed Sulaimon, and fakes a dribble handoff. Sulaimon then flares off a screen from Jabari Parker — now Duke has someone in the middle of the court.

On the weak side, Rodney Hood runs over the top of Andre Dawkins before he quickly turns back and sets the hammer. Cook, however, decides to keep the ball and go one-on-one — a mistake, look how open Dawkins is.

You can practice this player over and over again; it’s only going to be effective if you have the personnel to make the song sing.

Duke basketball has been one of the best teams in the ACC at scoring off screens. Over the last five seasons, Duke has scored better than one point per possession off screens four times. The lone exception — somewhat surprisingly — is the 2015 team that won a national championship and featured a bunch of good shooters.

The 2012-13 was tops in the ACC that season and also fifth nationally in offensive efficiency off screens.

The starting backcourt for Duke basketball in the 2017-18 — Grayson Allen and Trevon Duval — seems like it will be a a great combination to run this set — with Allen flaring to the corner while Duval drives and looks weak side.

Keep an eye out for that, especially in high-leverage situations.

Inside the Playbook Series

Hold the door, UNC basketball wants the elevator up

The transition offense of FSU basketball