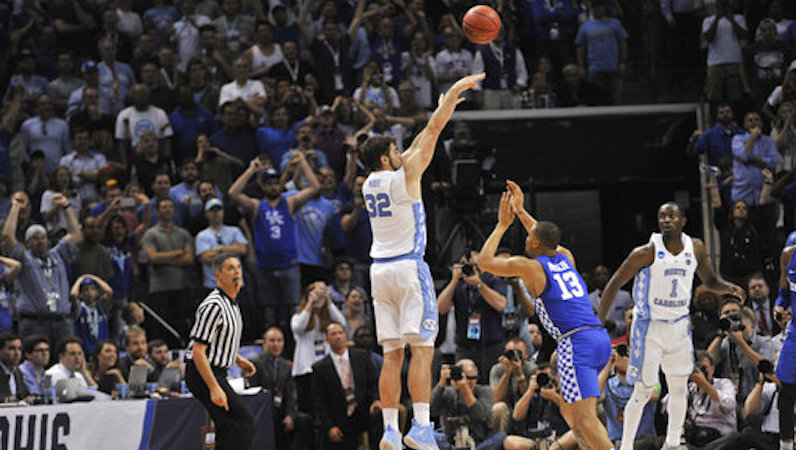 One of the defining moments of North Carolina’s sprint to the 2017 NCAA Tournament title will always be Luke Maye’s game-winning shot against Kentucky.

A major development for the Tar Heels this past season was the advent of Maye’s perimeter shooting.

North Carolina featured one of the more crowded frontcourts in America. Kennedy Meeks and Isaiah Hicks were senior stalwarts; freshman Tony Bradley, who continues to probe the NBA Draft waters, was a monster on the glass. Maye was able to differentiate himself from these other impressive players by bringing this skill to the table: shooting from an unusual position.

Maye shot 40 percent on three-pointers as a sophomore — the best number on UNC’s roster among players who attempted at least one triple per game. It’s a tremendous boon to get that type of accuracy from a power forward.

A pick-and-pop is when one player comes to set an on-ball screen for a teammate with the basketball. After screening that defender, instead of rolling to the basket for a layup, the player pops or slips out for a possible catch-and-shoot opportunity.

That kind of action has been around for a million years, but it’s become increasingly popular with the new wave of offensive basketball and the proliferation of three-point shooting.

This clip is from North Carolina’s win in Chapel Hill over Pittsburgh. Maye screens the player defending Joel Berry — Jamel Artis. The player guarding Maye, Rozelle Nix, drops back to make sure Berry doesn’t have an open lane to the hoop. With Nix occupied, Maye pops beyond the arc, toward the top of the key. He’s open, there’s no switch, and both players stay with Berry, who elevates for a three-pointer. Berry misses, but Maye is wide open for an easy offensive rebound.

Teams will have to start respecting that Maye pop, though. According to Synergy Sports, Maye — on a relatively small sample — was one of the most efficient pick-and-pop players in America. He scored 1.5 points per possession (No. 13 in Division I) and shot 57.1 percent (No. 2 in the ACC) on pick-and-pop jumpers this season. That’s outstanding.

Let’s check out another example of this, back in December against Kentucky — the Malik Monk game. Maye sets a very high screen — look how far above the three-point line he is here — on Nate Britt’s defender, De’Aaron Fox. Wenyen Gabriel, the freshman tasked with guarding Maye, slides under the screen to curtail Britt’s dribble-drive. Maye, however, is now wide open. Gabriel tries to sprint out to contest the shot, but it’s too late.

Will we see more of this next season?

Yes! It remains to be seen what Bradley will do, but even if the Floridian jumps for the league, Maye is in line for an increased workload.

UNC’s likely starting perimeter trio is Joel Berry, Theo Pinson and Kenny Williams. Berry and Pinson can slash and create for others; both players posted assist rates above 19.5 percent.

Seventh Woods, who struggled at times as a freshman, is a freak athlete at the point guard position. I’m bullish on Woods, and he can work as a secondary creator for North Carolina in 2017-18, too.

Basically, UNC has multiple guys who can ignite spread pick-and-roll/pop action. Justin Jackson’s shooting will be missed (bold take), but Berry and Williams should be able to give the Tar Heels enough spacing. Berry is one of the ACC’s best at operating pick-and-rolls, too, which makes this increasingly challenging to stop. Per Synergy, North Carolina scored 1.01 points per possession (42.7 percent) when Berry was a passer in pick-and-rolls.

Without the off-ball gravity of Jackson, and a reduced post game, the Tar Heels can fall back on more Berry pick-and-rolls. UNC will need added punch from the perimeter, and Maye has the ability to contribute more in that capacity.

Read more — Inside the playbook: Kyle Guy and the pindown screen