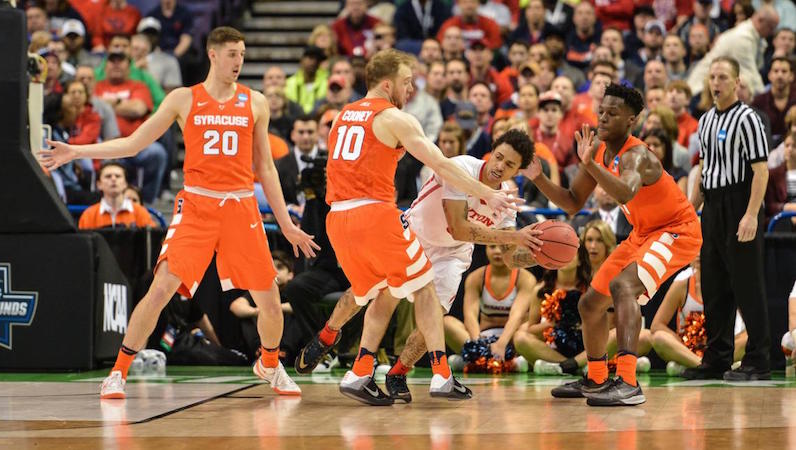 If you were to play a basketball word association game and the topic was a 2-3 zone defense, your response would invariably be “Syracuse.” Yes, much like the orange jerseys, Carrier Dome tapestry and a distaste for the city of Greensboro (I kid), the patented 2-3 zone of Jim Boeheim has become synonymous with Syracuse basketball.

The results speak for themselves, but let’s take a look at why year after year Syracuse continues to rely on its zone defense.

It’s the most-common zone defense, and an alternative to the far more prominent man-to-man approach. Two guards dot the top of the zone above each elbow while the team’s three frontcourt players create the backline. 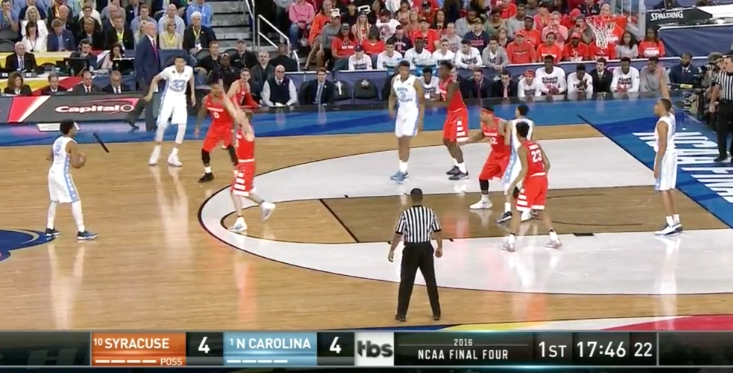 Zone defense is now allowed in the NBA, but in that league defenders aren’t allowed to hang in the lane (not guarding someone) for longer than three seconds. That’s not the case at the college level.

It’s important to note, too, for Syracuse that when the ball gets swung to the wing, it’s the responsibility of the backline forward on that side to close out on the shooter, which gives the guard time to rotate down. Once the guard arrives, the forward retreats back to the baseline. This creates a little more of a 2-2-1 or 2-1-2 look, but functionally it’s the same thing.

What makes it so effective?

First and foremost, the 2-3 zone helps protect the paint and, more specifically, the rim. Offensive basketball is all about moving the defense and locating a high-percentage shot to attempt. The best shots come right at the rim. This can be very challenging, however, against a zone, especially when it’s orchestrated by long and rangy defenders.

Opponents certainly come prepared with zone-busters — plays designed to puncture holes in the 2-3. If you can’t beat the zone with pace, attack the basket before the defense gets set, then flash to the middle, work the pinch post and look for shooters in the short corner or around the arc.

Normally, though, this forces opponents to play an offense that’s outside of the preferred flow. Duke and Notre Dame want to run motion — same with Virginia. Some of the principles of these offenses can apply against the zone, but it’s not the same; the reads and positions are different.

For instance, a high ball screen is an effective, initial counter to a zone. However, thanks to the zone concept, there are so many more help defenders around the lane in the 2-3 than in a ball-denial, man-to-man look. And when Syracuse’s defense rotates on a string, the zone is Fort Knox-levels of impenetrable.

Far too often, teams get impatient and launch the first halfway decent shot that comes across the scanner. Or they will pass the ball around the perimeter — without bending the defense — until they are forced to jack a three-pointer late in the shot clock. You’ve played right into their trap.

As an added bonus…

The zone also allows the players on the perimeter of the defense — specifically the guards up top — to gamble for steals. Guards can look to get in passing lanes when offenses try to skip pass over the zone.

Using data from KenPom.com, we can track some trends with Syracuse’s defense from the last decade. Over the last 10 seasons, the Orange has on two occasions led the nation (2011, 2013) in block rate — the percentage of opponent two-point field goals that are blocked. The Orange have ranked inside the top 10 in six of the last 10 seasons.

*Data courtesy of KenPom.com, that season’s national rank in parentheses

Syracuse has finished inside the top 25 nationally in steal rate in eight of the last 10 seasons, including six times in the top 10.

The zone doesn’t make for the most aesthetically pleasing basketball; it clogs the game, taking away passing and cutting lanes. However, it’s been incredibly useful for Syracuse. KenPom has been tracking these numbers since the 2001-02 season, and the Orange has only once ranked outside the top 70 in terms of defensive efficiency — points allowed per 100 possessions. That took place this season.