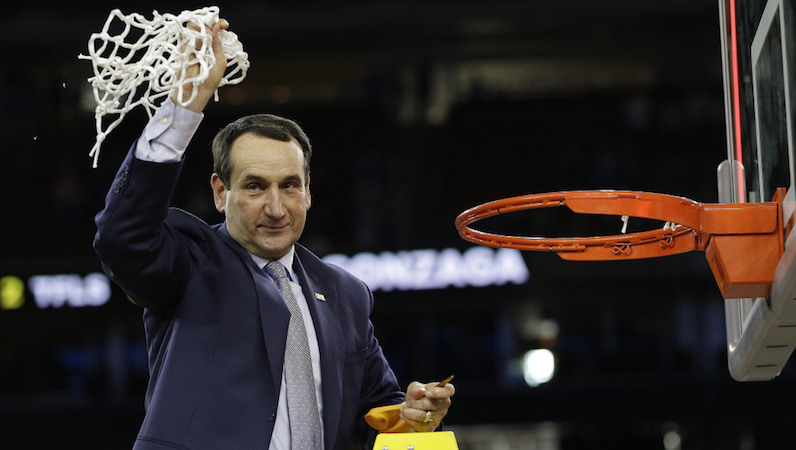 Duke basketball is routinely one of the best programs in college hoops for a variety of reasons. The coaching staff is top-notch, the roster is invariably stacked with talented players, and the culture all around is excellent.

Mike Krzyzewski built the foundation for Duke on defense, but the offense has always been really darn good, too. The Blue Devils run a motion offense that opens the floor for creativity and connectivity. The more time players spend in the system, the more challenging reads they can make. Today, we will look at one of the most important elements of Duke’s offense: the dribble handoff.

A dribble handoff — or a DHO as it’s known in basketball circles — is simple yet wildly detailed action. It’s become a critical element of any modern motion offense. The DHO works a lot like a pick-and-roll. It can force switches and force defenses to rotate, which can create driving and passing lanes for slash-and-kicks.

It starts with the ball being entered to a player — usually in the high-post around the elbows or outside of the three-point arc. The player receiving the initial entry pass is frequently a post player (Amile Jefferson). That player will dribble to ball in a certain direction while a teammate sprints in the direction of the player with the ball. At the mesh point, one player hands the ball off to the other.

Now, the person with the ball has the half-court offense world in the palm of his or her hand: Shoot, dribble-drive (either to score or kick) or run pick-and-roll with the player who handed the ball off.

How does Duke use the DHO?

Duke’s motion offense can at times be a thing of beauty; the Blue Devils spread the floor as well as any team in college basketball. The arc is dotted with shooters who never stop moving and attacking. Read, react, score, rinse, repeat. When it’s humming, it’s impossible to stop.

It takes more than an army of future NBA perimeter players to make this ship sail; skilled big men who can pass and screen are vital. Duke deploys its post players in the middle of the floor and uses them to facilitate movement and ball reversals. Amile Jefferson never got enough credit for allowing the offense to at times flow through him.

Duke can use this action as the initial movement on a possession or as a means of getting a quick, easy bucket.

That was especially pertinent for Krzyzewski and his staff last season because Duke didn’t have a traditional breakdown point guard. Jefferson helped the Blue Devils get north-south and attack the basket. Let’s check out how Duke uses this action to get a great look at the hoop against Florida — a powerful defensive team — last season:

Kennard takes the handoff from Jefferson at the top of the key. Chris Chiozza, Kennard’s defender, fights hard over Jefferson’s screen. This is where you can’t put enough value on experience; Jefferson, the wily veteran, immediately flips and re-screens for Kennard.

John Egbunu, the man guarding Jefferson, rushes over to switch onto Kennard, who takes a couple dribbles before settling into his mid-range jumper. With a big man on him, Kennard can take his time, get to his spot, rhythm up and shoot. That’s a mismatch that Coach K will always entertain.

This is a great look for Duke, by the way. According to Synergy Sports: Kennard scored 1.22 points per possession and shot 50 percent from the field after taking a dribble following a DHO. This ranked No. 1 in Division I basketball among players with at least 50 such possessions.

Gone are both Kennard and Jefferson — the primary battery for Duke’s DHO game in 2016-17. There’s no immediate need to fret and burn those pages from the playbook, though. Per Synergy, Grayson Allen shot 38 percent after taking a handoff this season.

The arrival of Trevon Duval — an archetypal pure point guard — means Allen can float off the ball more for the first time since his freshman season. Allen will be in line for more handoff action, and don’t be surprised to see his efficiency after a handoff rise.

The trick, however, will be developing chemistry with one of Duke’s bigs. Marques Bolden has a world of potential, but he recorded just two assists in 157 minutes of action this past season. This would be a big step for him. Five-star power forward Wendell Carter Jr. is touted as a talented post passer, which is promising.

Antonio Vrankovic showed a little initiative as a playmaker; despite an infrequency of touches, he assisted on nearly nine percent of his teammates’ made field goals when on the floor in 2016-17, according to Sports Reference. He could contribute here, too.